Posy Simmonds equals comics perfection.  Even the Queen, who’s made her a MBE, has figured that out.  And so I shouldn’t be surprised when, running a bit late, there is a FULL HOUSE at her Laydeez do Comics talk! 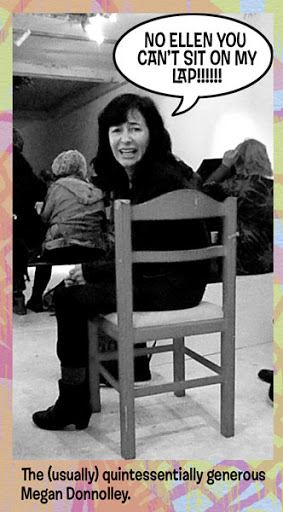 The whole London comics scene is here…a fitting tribute for a woman who’s spent her whole life telling stories that blend humour, poetry, and, occasionally, sudden death – all with a panache that would make Kirby, Eisner or Spiegelman weep.
Born at the close of World War II, Posy’s been a brilliant cartoonist almost from the beginning.  Need proof?  How about her early masterwork – Bullet Vengeance!!!! (exclamation marks mine.) 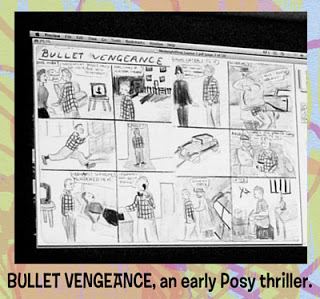 Note the prison bars in the final panel.  CRIME NEVER PAYS.
As a young person Posy evaded gaol and instead chose to study at the Sorbonne. She returned home to a place at the Central School of Art and Design, where she mastered the typographer’s craft. 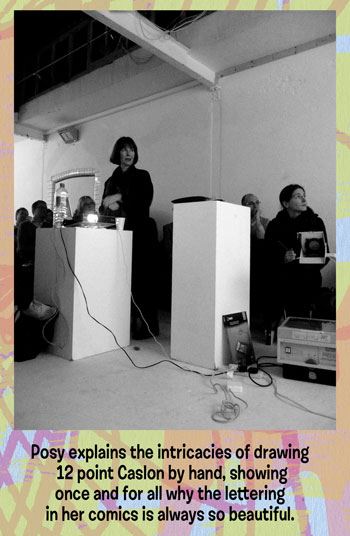 Nicola and Sarah, the LDC organizers, have provided Posy with an overhead projector, and Posy starts to draw.
A short film by Tony Mines.
All the while, we’re hearing about her early newspaper days (including some talk of the fantastic Mrs. Weber’s Diary – grab a copy on Amazon Marketplace or Alibris), moving quickly on to her first graphic novel, Gemma Bovery.
Posy brings up a crucial difference between Posy’s heroine and Flaubert’s original.  Those of faint constitutions (or those averse to spoilers) may want to avert their eyes… 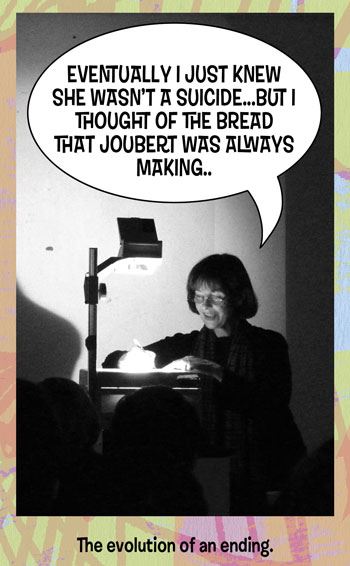 Another topic I found mesmerising – Posy’s discussion of her reception in France.  I’d always assumed it was 100% favourable – Tamara Drewe was nominated for the Prix d’Angouleme, and I’d seen a very cosy and amusing talk with Posy and Charles Berberian (author of Monsieur Jean, and a past president of the Angouleme festival) at the Institut Français.
But apparently the amount of TEXT in Posy’s comics baffles her French readers. 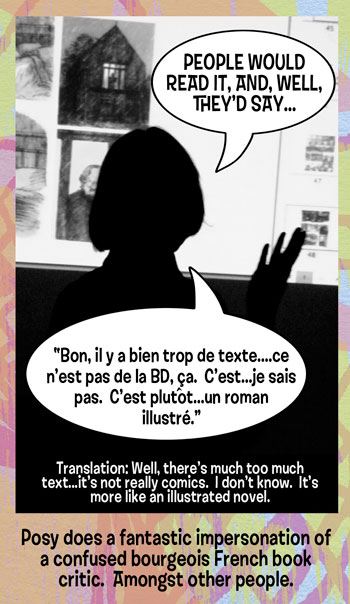 As usual, Laydeez do Comics provides a good chance for all of us isolated comix types to enjoy each other’s slightly disquieting company.  Full of enthusiasm for the comics genius we’d just witnessed, we set upon the refreshments (including homemade mince pies!)
The room was chockablock with both comix stalwarts… 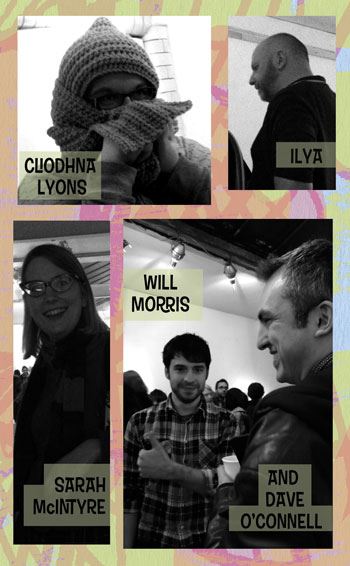 …and people I’ve never seen before!  The latter group fascinate me
disproportionately….they look so pure, and serious.  BUT ARE THEY?! 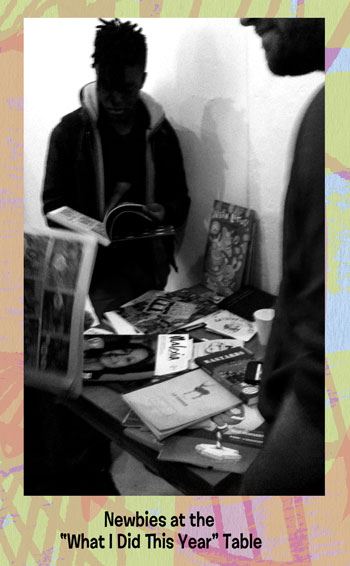 After the break a boatload of visitors from abroad told us about their projects, and the comix scenes in their home countries…it’s more comix awesomeness than should be allowed.  TOO AWESOME!  These nice folks from the Finnish contingent were accompanied by comix professionals from the Netherlands and Morocco.
The topic of reading comics in another language came up, and I mentioned the work available on http://www.comixinflux.com , a Wikipedia (or should I say Wikileaks!) style site where multiple users can collaborate on the same translation.  Publishers are starting to take notice: a translation I completed of Pauline Martin’s La Meilleure du Monde was recently re-published on the site of Ego Comme X, her publisher.  Whether you want to find a book to read (there are Amazon links throughout the site) or contribute a translation of your own, Comix Influx is a great resource – check it out! 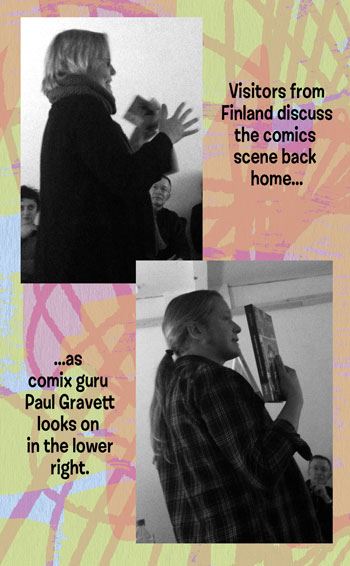 Meeting over, we head out into the night, having to pass on the usual Indian meal in Brick Lane due to complete and utter fatigue (the downside of driving home from Somerset that morning).  My head is full of future blog posts!
Thanks, Posy!  And thank you, Laydeez do Comics.
Nicola and Sarah RULE!