My name is Lucy Bergonzi and I have worked as a muralist, as a designer, in youth and community arts, and currently in social care. My first love is drawing, and I was delighted to be asked to be tonight’s blogger – after only discovering Laydeez Do Comics in September. The drawings here show the speakers – and listeners – and organisers – of tonight’s meeting. My website is www.lucybergonzi.co.uk

Tonight’s meeting was based loosely around themes of sex, sexuality and erotica.

Our first speaker was Michael O’Mahony, whose work could be said to belong to the tradition of Outsider Art, with one of his artistic influences the Outsider Artist Henry Darger. Michael is interested in themes of Freudian subconscious, and his work does seem to show elements of dreams and fantasy. Amongst his other themes are visions of a post-apocalyptic world in which he is the last man remaining; a travelogue in which Thelma and Louise are represented by Michael and his yellow duck; his Dad who is an influence and who appears as a motif in his work; and Dawn from Eastenders – though in a soap-based confusion Michael had thought perhaps she was from Neighbours. 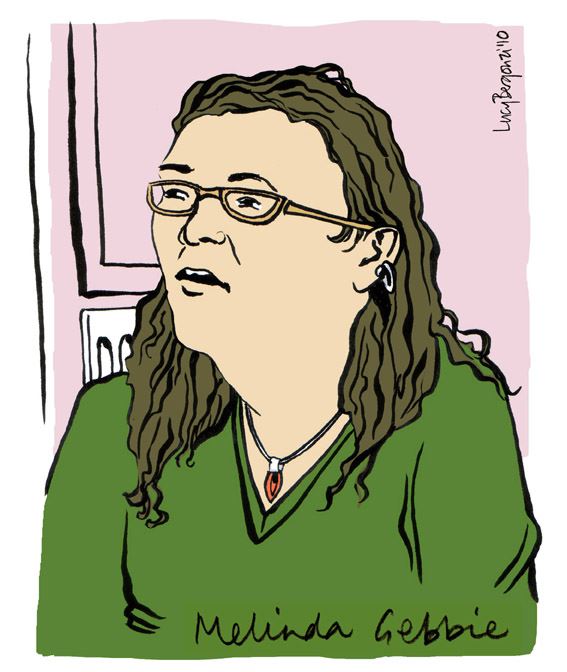 Next was Melinda Gebbie, who with her husband Alan Moore has produced the graphic novel ‘Lost Girls’. Melinda describes the book as ‘a fairytale for adults about sexuality’, and in a nutshell, describes its vision as ‘make love not war’. It features three main strands about three main female characters: Alice (from Wonderland), Dorothy (from Oz), and Wendy (from Peter Pan) – and these characters are presented as sexual women. Artistically, she wanted each character to have her own atmosphere in the book, and for this Melinda chose a colour palette for each woman: she loves colour, and in her drawing style she was looking for a soft, Art-Nouveauish, ‘anti-ruler’ approach. The artwork pages were originated larger than the print pages, and she didn’t use models. In spite of taking three days per panel (after originally starting work on the book in 1989), she says she doesn’t regret a single minute. A discussion was prompted about the presentation of female characters in such a sexual way, and there was something of an ‘agreeing to differ’ over this point. For me I would love it if women could be more often presented in more active, effective, positive ways, and less constantly sexualised… but then maybe that’s just me, and I should write my own graphic novel. Someone suggested that for those who work in erotic art or literature, there is a juggle between wanting to turn people on, but also in protecting people’s rights and not veering into exploitation. 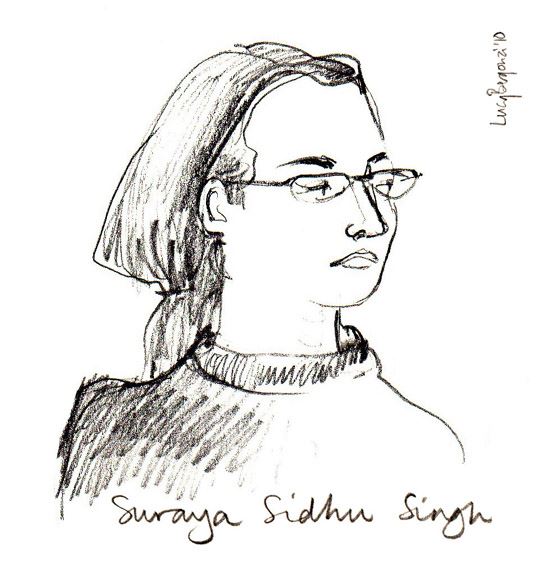 Finally Sina Shamsavari (working as Sina Evil) showed his work along with some of his early influences – which were largely superheroes. He writes and draws autobiographical comics – focussing on sexuality and the experiences of a young gay man. He worked with Jon Macy and together they produced a poignant one-page story about a very personal and true experience in Sina’s life. He says it was invaluable to work with a writer as it gave more perspective on the events. His work has been featured in ‘The Book of Boy Trouble’ and in Richard Cowdry’s ‘The Comix Reader’ www.thecomixreader.com Sina used to keep sketchbook work and diaries: less so now as he says it’s so hard to find the time. However, having shown the room some samples of his work (linear reportage pen work, with dates and comments), the response was so overwhelmingly positive that I hope he goes back to it, and keeps doing it. Sina’s website is www.boycrazyboy.com