Menu
£0.00 Cart
Medicine, Conversation and Comic Artists
22 October 2012, at Laydeez do Comics
By Sarah Glazer
I am Sarah Glazer, you can see my work at  www.sglazer.com For a writer like me (who does not draw) and is a newcomer to graphic novels, the Laydeez do Comics salon off Brick Lane can be a revelation–a window into the ever-widening scope of comics art and the London-based talent that makes it happen.  As a journalist who has covered medicine and health, I was fascinated to learn at October’s gathering that medical illustration has become not just a method of documenting illness, but an art form that brings a little humanity to medicine.  I’ll report further down on the formal presentations made on Oct. 22nd. But I’ve found that just as important is the inviting atmosphere Laydeez co-founders Sarah Lightman and Nicola Streeten create, enabling talented people with diverse skills to find one another, such as writers linking up with artists. Listening to the self-introductions at the start of the evening (required of everyone who attends), I’m continually surprised by the diverse paths through which people come to this art form. Many create comics prolifically in their spare time while holding down a day job that may have nothing to do with graphic novels. During the break over tea and cake, I talked to Ian Williams, a GP. He told me he uses the graphic novel format to illustrate the disturbing ways that doctors sometimes act out their personal frustrations and stresses. He has been unsparing in exploring some dark corners. In his “Cruel to be Kind” strip he dramatizes young doctors’ sadistic techniques for prodding awake a patient whom they believe is faking unconsciousness. You can see this comic in “Disrepute,” published under his pen name Thom Ferrier, and at the web site he founded (http://www.graphicmedicine.org/), which offers more examples of this growing genre of graphic medicine.
Illustrator for this Blog–Artist Phoebe Cohen
To help me fulfill my assignment–describing the three distinctive presenters of the  evening– the very talented American comics artist Phoebe Cohen graciously agreed to illustrate this blog. Phoebe Cohen is a graphic novelist, artist and illustrator in Florida. She runs the website www.wanderingschmuck.com and has a blog at phoebester.xanga.com. She is currently collaborating with Nancy Miller on the graphic novelization of Ms. Miller’s book: “Memoirs of a Copycat.” 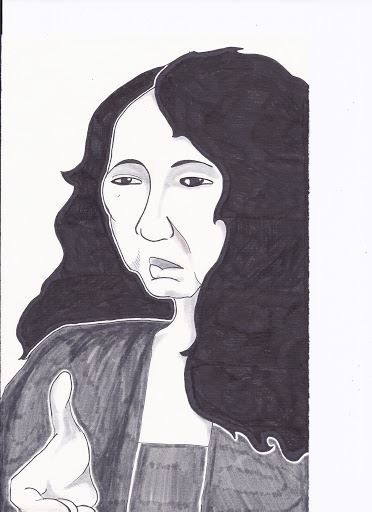 “Drawing my way to understanding” is the way medical researcher Lucy Lyons describes what she does.  Her occupation, drawing people and the human anatomy in various forms of sickness and health is “drawing research.” She spent five years studying and drawing examples of a rare disease in which a person’s muscle and connective tissue turn to bone, known as fibrodysplasia ossificans progressive (FOP), and her drawings are often used in academic lectures to help understand the condition.
She has also begun to create what she calls “story drawings,” which draw on her wide experience of different medical situations.
While exploring aging in Denmark, Lyons rendered arthritic hands with a beauty that even an old woman ashamed of her arthritis was able to see in her sketch, she recalled.  Lyons reminded us that this art form has a venerable tradition going back to the 16th century. Flemish physician Andreas Vesalius’ influential book on anatomy was illustrated with woodcuts by Titian pupil Jan Stephen Van Calcar. One of the most famous woodcuts shows a skeleton standing in a lifelike pose of grief, a “weeping skeleton.” Medicine could not be understood without drawing, 19th century pathologist Sir Robert Carswell believed. Yet his sketches went far beyond the clinical. “You can feel this man’s pain,” Lyons said of Carswell’s sympathetic portrayal of a man with subcutaneous cancer. And his portrait of an impoverished woman with an extreme form of the skin disease psoriasis gave the woman “her dignity,” Lyons observed, pointing to the personal detail of the earring she wore. In much the same way, Lyons’ sketches of elderly Danes reflect a quiet dignity.
Fay Trier, writer http://www.facebook.com/fayt35 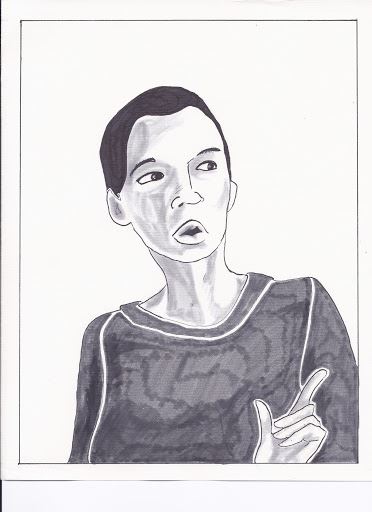 Fay Trier is a writer of monologues and short stories who has entered the comic art form by collaborating with artists for the drawing part. “When I used to write, I held on too long” to a piece of prose before letting it go to publication, she said. But working with an artist and a deadline “makes me get past myself.” Trier usually tells the artist what images she wants to go into each panel, as well as the words. “I’m very conscious of how I want the final piece to look,” she said. But she acknowledged she is more open to artists’ suggestions about arranging the panels than she once was. “I’m getting better at allowing my work not to be (only) mine anymore,” she said.
My favorite comics title was “The Aspiration for Perfect Hair,” inspired, by Trier’s participation in a focus group for L’Oreal. Trier has also experimented with fables in comic form. In one, a character rolls a rock uphill Sisyphus-like. (Question: How long should you keep trying? Moral: “Until.”) A recent comic of hers set in London will be featured in Ink+Paper [http://inkpluspaper.com/].
Simon Grennan, artist http://kartoonkings.com/

Simon Grennan, who has collaborated with American artist Christopher Sperandio since 1990, is the artist of the evening who most defies definition. The unifying theme of this team’s work, as Grennan described it, is that “We’ve invited people to do stuff they don’t (normally) do.” This has ranged from inviting workers at a Chicago Nestlé factory to design their own chocolate bar to compiling the stories of New York City’s nighttime workers into comic book form. The comic book, “The Invisible City,” supported like most of their other work by foundation grants, was then distributed free in the New York subway.
My favorite cover came from their comic book “Modern Masters,” based on stories from the Museum of Modern Art (MOMA) and the gallery P.S. 1 in New York City. “Modern Art Made Her Sick!” accompanies a pop art-style picture of a woman hiding her eyes. “She couldn’t bear to look!”
The artist team is currently developing illustrations for a comic book based on a novel by Anthony Trollope. The renderings, including one of a drawing room, looked very inviting with their style reminiscent of 19thcentury book illustrations. But I’m not sure I’m even allowed to compliment the artistry. As Grennan told us, he and Sperandio have now developed a set of rules so that ANYONE can draw like them.