Hi I am Marcia Mihotich this month’s guest blogger, mostly a graphic designer and sometimes illustrator.

Nicola Streeten and Sarah Lightman welcome us all to Laydeez do Comics May meeting. Tonight – analysis, medicine and illness and of course comics… Everyone introduces themselves and generates a bit of group togetherness this month’s question to answer is ‘what was the last really interesting conversation they had’. Hmmm, not so easy. Here is a mini sampling of the responses.

Nicola: Enjoys watching Outnumbered. (Not really you talking though is it Nicola?)

Sarah: Her Grandmother is ill and has been talking to some fantastic nurses.

Julie: Busy bringing up 2 grandchildren but somehow manages to find he time to be writing a radio play.

Ed ‘I have a flyer’: Organising the London Zine Symposium

Philippa: As well as being a successful Psychoanalyst, and now a successful author is happy to accept introductions to her husband (Grayson Perry) for amounts in excess of £500,000. I guess the money minimises the narcissistic hurt.

Naomi: Teaches English Literature and ‘can’t recall any conversations that are any better than those with my daughter.’ (For some reason I assume her daughter is about 10 years old, actually she is Sarah Lightman).

Christina: Talking about how common medical topics are in Japanese Manga.

Nathaniel: At school so does nothing… but was talking about the difference in life expectancy in the former Soviet Union and the West.

Peter: Illustrator, talking about is Martin Amis misogynist? Yes of course Peter, but you know in a good way…

Ian: GP, printmaker and creator of graphicmedicine.org overheard a really good conversation of a guy on a train making an appointment for his wife to see a gynecologist. Perhaps he thought it was some as yet undiscovered form of showing off.

Kate Brown: Who is a super comic creator, wonders does everyone hate their own artwork? Probably, but everyone likes yours.

Someone had a conversation with someone who assured her it was going to snow today. (Did they say it was going to be in London? I am pretty sure it snowed somewhere today so they may have been correct).

Anyway enough of that…

Ashamed and bemused by our own fragility, we consistently underestimate how anxious everyone else is. Alain de Botton

Philippa Perry talks about her NEW book Couch Fiction. Not only does PP look very graphic and excellent she has the bonus attribute of a very clear speaking voice and is very articulate and amusing. (You will be able hear a podcast of this on Alex Fitch’s show on Resonance FM 104.4FM in the Autumn). 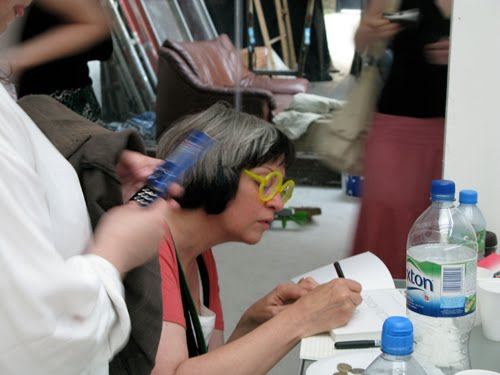 PP talked us through her book, the process of creating it and sharing many psychotheraputic insights along the way. In a not very connected way here are some of the things covered…

The book is a year’s record of sessions between Pat Philips a Psychotherapist (who bears NO relation to PP) and her patient James. PP in real life is MUCH more stylish.

OH MY GOD! says PP instead of having relationships with people in the real world we often have them in our heads… So the book is an insight in the world of therapy.

PP wanted to do this book because…

PP likes slice of life stories, like Harvey Pekar (and he doesn’t do his own drawing either).

– Want to show off and heal narcissistic injury

– Wanted to produce a book I wanted to read.

PP is very dyslexic and say she really learnt to read through graphic novels.

Sketch PP sketched out the whole book with very nice wobbly little drawings on A4 paper. Then Junko Graat turned them into drawings acceptable for a graphic novel. PP used a producer for Couch Fiction. Someone who knows about how to present the book to publishers and get it all together. Manuscript is fine for a book but not for a graphic novel. She sent her book as a concept with some images and text to Macmillian who ignored it but when it was all done produced and looking lovely with the help of a designer they accepted it. The whole process took 5 years.

Some more insights from PP and the world of therapy:

– PP has a lot of cycle courier as clients. Lots of lycra. Lots and lots of lycra…

– People think therapists are non-judgmental.Wrong. They are. They’re only human.

– The unconscious is brilliant with cliches. If you look at your own dreams it’s oh so simple.

She whizzed us through the book and lots of well known and influential people really like it too… Alain de Botton, Suzie Orbach, The Guardian, Time Out… So will you.

Then some questions from the floor:

Q: Were the drawing meant to be different throughout the book? Sometimes the are symbolic other times emotional, cartoon-y, not cartoon-y.

PP: The short answer is not sure! Junko may have done it on purpose. Or not. But if in doubt EVERYTHING is symbolic – it’s more poetic like that.

Q: Did you have conversations with Junko about the formating or transferring your sketches to the final product…

There was lots more chat about Junko, how they met (she does PP garden and reads her text books) her background – horticulture, product design, skills and working habits, and of course the many cultural differences between the Japanese and English.

There was also a discussion about formats. I didn’t contribute to this at the time but people – avoid A4 at all costs. No one, really no one (I mean designers and book people) would do anything A4 given the choice unless you are on a micro budget or are perhaps are doing some kind of self published zine thing, in which case it is sort of ok. Strangely A5 and A3 are not burdened with the uncoolness of A4.

PP is now working on the next book hurrah! and taking a year out to to do it. (Otherwise known as CPD – Continuing Professional Development). It more about a day in the life of a psychotherapist. It will cover many clients and different issues and of course her own life which is a disaster – with her husband Bob, who owns a chain of cycle shops (lycra a continuing theme).

Thank you Philippa, that was really brilliant. 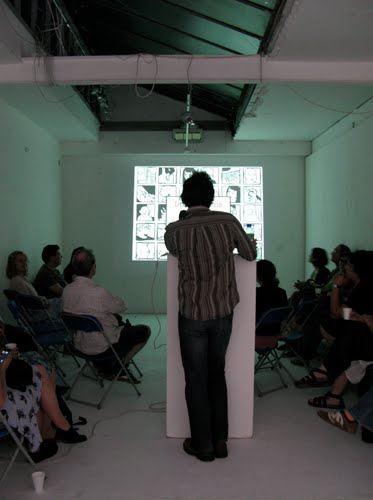 Ian is a part-time GP in North Wales in a town with the dubious distinction of being the 3rd worst place to live in the UK if you are Gay.

He draws comics about being a GP under the name of Thom Ferrier. Ian is a very funny man and spoke about the stress and difficulty of being a GP and sometimes feeling like a failure.

He was always into art at school but went to medical school and trained as a GP. We saw his lovely landscape inspired painting and prints.

Ian says ‘I started drawing comics but felt I needed a pseudonym, so my patients wouldn’t know it was me…’

His comics cover ideas like what if your doctor is gradually becoming psychotic not you?

What if your patient is a former bully from your school who may or may not recognise you? (a pretty good reason for the pseudonym).

And what’s it like to be continually burdened with other peoples problems?

Ian has always been into comics and of course lots of people with illnesses or conditions have written graphic novels so he came up with graphicmedicine.org With some funding from the Wellcome Trust Ian has set up perhaps the first conference about Comics and Medicine on June 17th.

Ian is now taking a year off after to being unable to arrange a sabbatical to concentrate on a larger graphic work called The Fear of Failure. The main character is a female GP. So it’s less obviously autobiographical, obviously. Lois is 40 something, single, has issues with food and fitness. A regular girl I guess. It is being released page by page on the web.

Ian then showed a pretty funny picture of a man with his head in his hands surrounded by the text I AM A SHIT DOCTOR. We all liked that a lot and more laughter from everyone when he told us that when he asked a fellow doctor/friend ‘don’t you ever feel like this?’ The answer was ‘No.’ Aurgh, yet another reason to feel inadequate.

So there you go, Ian TRYING to debunk of the myth of the super godlike doctor. But we’re not having it as most of the initial questions were about being a GP not about Ian’s graphic oeuvre… We are all obsessed by this I guess.

There was a discussion about the choice of a female for the GP rather than a male as Nicola particularly felt that many of the failings of this character would be put down to the usual female ‘issues’ as opposed to the stress of the job.

IW says: Medicine IS a macho profession and showing weakness is not really done, Lois is tough but she’s not there to be a polemic about medicine.

Q:Someone else asked Is ‘bedside manner’ a myth or does it really exist?

Ian says: Empathy is real, but is it useful? It burns you out, you carry the burden, internalise it, it grinds you down, it’s mentally and emotionally knackering. There’s a lot of burnt out GP’s out there.

PP adds the professional touch ‘Pass the pain (ie share it with someone, or if it’s really bad take a year out).

Alex commented on another of Ian’s books being halfway between a comic and an artist’s book. Yes it’s true, it has many lovely qualities, the format, the paper and quality of printing.

And they were all gone when I wanted to buy one. But you can go to the conference details below.

By her own admission the only person in the room not working on a graphic novel. But aspiring to of course…

Columba spoke about how her work in clinical medicine with ill and terminally ill patients made he want to find and explore ways in which their stories could be heard. She thought of comics – with their combination of images and story.

We don’t know but she spoke about Funky Wickerbean, Lisa’s Story by Tom Batiuk and Our Cancer Year by Harvey Pekar. All stories which deal with illness and death in a moving and empathetic way.

Lisa’s Story which was spoken of as one of the first graphic novels about cancer was published 12 years AFTER Our Cancer Year.

In Our Cancer Year. You don’t even really like Harvey, there’s no great happy ending or sense of triumphalism but you do feel along with Harvey that he has been changed or transformed by his illness.

There was general discussion about other public depictions of illness, John Diamond, Ruth Picardie… and how ‘trauma’ has become part of the public consciousness post ‘Diana’.

Opinion seems to be the graphic approach has huge potential – but as Columba says ‘look at Harvey Pekar, who did he write that for it’s certainly not for self help’.

Thoughtful stuff. What a great evening.

Thank you Laydeez do Comics. 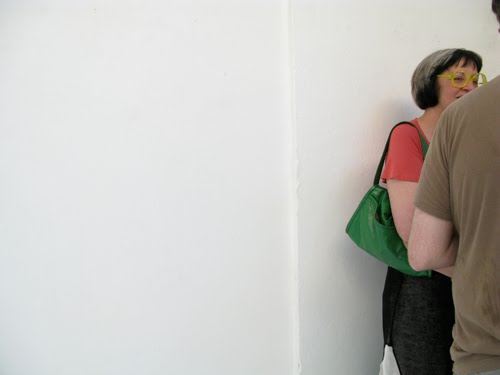