Menu
£0.00 Cart
My Name is Robin Barnard. Have a look at my own blog here.  I am this month’s guest blogger for Laydeez Do Comics
This month we were treated to a group of new and very promising creative talents in the form of the London Print Studio Comics Collective Karrie Fransman writer and artist of The House That Groaned introduced the Collective in her role as Youth Arts Co-ordinator. The London Print Studio is a charitable organisation and funded this project, selecting six 20 – 21 year old creative talents from hundreds of applicants to offer them a six month internship. During this time, the successful applicants were encouraged to develop their work and as part of the experience each member hosted workshops with children aged 16-18. This Project is one I think we all at the Laydeez would say is both inspirational and very much a necessity and it is great to see people being given a chance to let their creativity grow and shine in such a positive way.
The collective have produced between them a fantastic anthology called Parallel Lives, published by Knockabout Pre-order here
The first member of the collective to present was
Abraham Christie
http://doodledaydream.blogspot.co.uk 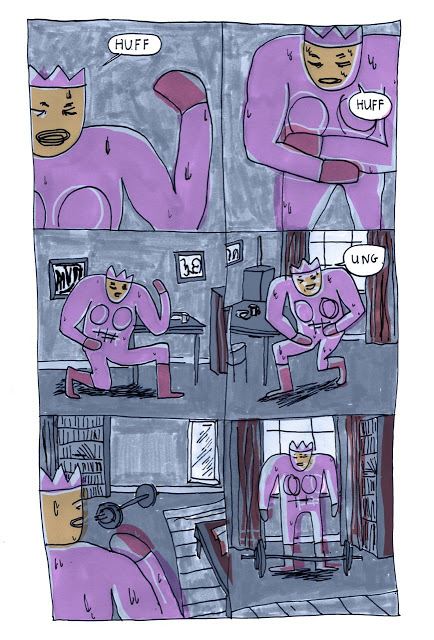 Abraham does comics which by his own admission seem to feature himself naked – one wonders if this a metaphor for how exposed a creator may feel when sharing something personal to them. Abraham also does semi autobiographic comic strips with an avatar of himself wearing a cape (masking himself safely underneath a veil), in normally mundane or normal situations – He has even has done a strip about his visit to the Laydeez
http://doodledaydream.blogspot.co.uk/2012/03/issue-no-341-laydeez-do-comics.html
Abraham’s Contribution to Parallel Lives is a sample chapter from his big graphic novel project – which depicts the last day on earth an earth with super heroes, but with these heroes powerless to do anything to avert the impending disaster – what will these do – the sample chapter depicts a man trying to make up for lost time and some broken promises to his girlfriend (possibly wife) but ends up missing her entirely. What appealed to me most about Abraham’s work was its honesty, a true and raw edged graphic depiction of Abrahams’ own sensibilities. Abrham has already found his voice, stays true to this and has a interesting way of looking at things which will make his work stand out.
The next member of the collective to present was
Jade Sarson 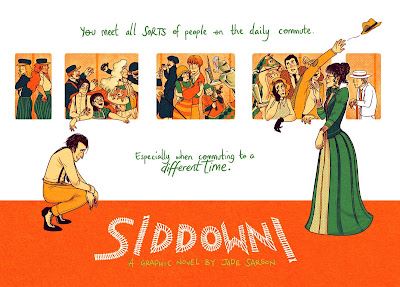 Jade drew a Laydeez blog entry for the December 2011 meeting which was both beautiful and inspiring in its design. Jade does a popular web comic http://cafesuada.smackjeeves.com, which she currently updates around once a month.
Jade did a self published graphic novel adaptation of The Tragedy of Antony & Cleopatra, completed for her final year of university. The project was heavily inspired by the Manga Shakespeare series, and re-sets the story in the 1920’s. Her contribution to Parallel Lives is a sample of Siddown, Jade’s work in progress graphic novel, set on a train that can travel through time. The story features an unlikely couple who come from completely different time periods but are very much in love. By happenstance the lady who comes from the 1920s ends up coming off the train the same time as her boyfriend – now she is stuck in the future but they are now truly united and look like they will go on to be happy.
Jade has an eye for detail and design which is staggering. She admits to spending a lot of time considering the elements of the page, researching the look and feel, including textures and layouts but all based around strong central characters. All the elements combine together to elevate and to take the emotions and depiction of the story into many interesting places and Jade is also able to diversify with her styles bringing something different and unique to each project.
The next member of the collective to present was
Lily-Rose Beardshaw 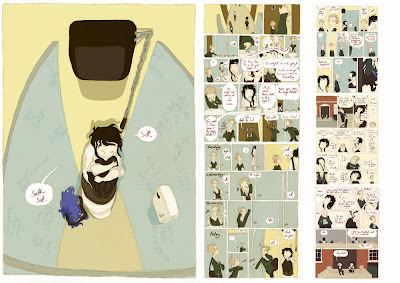 Lily combines the use of a wide range of materials and methods to make her creations, from the traditional ink and paper, collage and even hand sewn or stitched images. Lily made a “rather silly comic”for the  anthology Science Fiction Octuple Feature and made an adaptation of Gormenghast.
Lily is now working on Born Secular  Which she says comes from a song from the album Jenny Lewis & the Watson Twins. It also refers to the condition of the majority of young people living in the UK today. Lily’s contribution to Parallel Lives is Ham Sandwiches, a story set in a school about an alienated young woman who discovers a friend in the most unlikely of places and in the most unlikely person, it is warmly written with well defined and rich characters.
Lily is a complete innovator when it comes to choosing what to make a comic with and how and has a fantastic attraction to material textures colours and paints all lending themselves towards depicting the story in a very unique and rich way, Lily’s work is literally tactile.
During the every popular mid session break, I took the opportunity to try and speak to these creators in person.
I was also treated to a display of original art by another contributor to Parallel Lives, Taymah Anderson, one of the younger workshop attendees who has great sensibilities in both storytelling and line work providing a unique and fresh perspective.
After the break the next member of the collective to present was
Shamisa Debroey 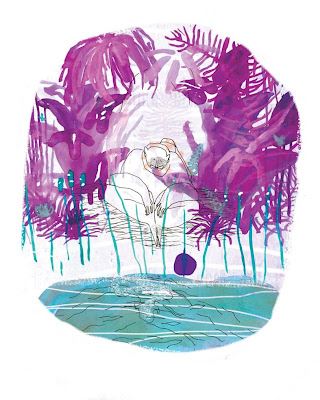 Shamisa is Belgian, a country that embraces the graphic medium and treats its as a serious art form she started with illustrations but wanted to make a sequential narrative. She describes her style as “clear line but with a lot of colour.” Shamisa is in the process of making a graphic novel based on her life and family called The Wanderer which she describes as “Two generations that collide in their search for the ‘other one’. A poetic atmosphere and personal words bind the two stories together.”
Shamisa’s contribution to Parallel Lives is Casual Conversations, a chance meeting between a woman and the man she has a casual fling with (not that he realises it). The depiction of the woman featured has to be one of the most real and honest characters I have seen.
Shamisa has a unique and personal fine line style which is combined with a very interesting use of colours, abstracted to the images almost like separate shapes / shadows suggesting layers of story.
The next member of the collective to present was
Merlin Evans 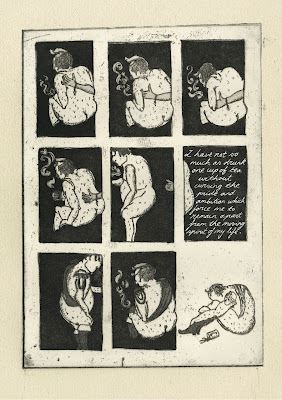 Merlin made 26 cars each showing a different art style (For example, Futurism, Cubism, Expressionism) after teaching herself how to draw each style. She has done some superbly detailed etched book illustration work for children’s publishers and also made a massive baby sperm whale made of 100s of drawn squid for the Cork Street Open Exhibition as well as drawing myths such as the MINOTAUR. Merlin admitted she can be very demanding of herself in making beautiful creations yet really enjoyed an experiment of doing a complete drawing in just one sitting.
Merlin’s current project and also her contribution to Parallel Lives is taking famous love letters and adapting them into a graphic narrative – Parallel Lives features the love letter Napoleon Bonaparte wrote to Josephine, days before he went into battle. This piece of work is simply stunningly beautiful, taking the text into places far beyond the mere words themselves and deep into the feelings that are hidden in-between the lines and words of every sentence transposing emotion into heartfelt reality on the page in texture and form.
The final member of the collective to present was
Susan Yan Mach 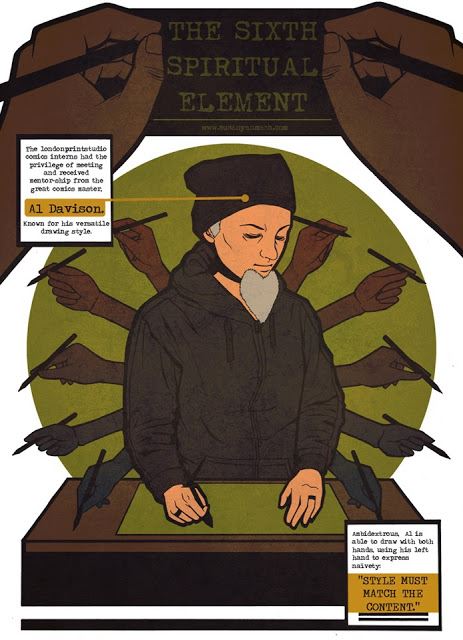 Susan also contributed to a beautifully made Laydeez blog entry for last month’s meeting in February. She sees the graphic medium as a conduit for universal communication in illustration without language and has a very great sense of graphic depiction. Susan is British Chinese and interested in sharing some her cultural heritage. She creates and writes comics exploring Chinese mythology and folklore.

Susan shared her contribution to Parallel Lives which is called Hungry Ghost Festival a ritual which is similar to Halloween but lasts an entire month. In the story she depicts a Chinese man born and bred in the West who is completely unfamiliar with any of his heritage or ancestral customs and puts him right in the middle of the Hungry Ghost Festival where his cultural ignorance makes him wonder what kind of mad place he has gone to (Comparing the experience to The Blair Witch Project)
The style and technique used are equally a unique fusion of styles both magna and westernised methods of storytelling, all beautifully depicted. I love that although the lead character is a surly and uneducated teenager, his heart is still very much in the right place and despite the crazy goings on, he still tries to make an (admittedly misguided) attempt to save someone.
In conclusion the collective learnt from each other as a group, severing as inspiration, help and a sounding board for each other, each pushing the others on with their beautifully creative output. All of the collective I would imagine feel both very lucky and proud to have shared such an experience and have possibly even surprised themselves with the things they have managed to do and the experiences that they shared.
One hopes to hear or see from this talented group in the future in ways that we here at the Laydeez could only begin to guess at – one thing’s for certain it will certainly be a very interesting future indeed.