Hi! I’m Pete Hindle, the blogger for the September 2014 London edition of “Laydeez Do Comics”. I’m an artist and part-time writer, living in rural Bedfordshire, and I’ve been coming to LDC for about a year now.

Returning after the summer break, this was the second Laydeez do Comics at the new Foyles location. The old Foyles, with it’s wigglydy pigglidly floorplan, was much more fun, but the seats in the lecture theatre were torture. For anyone who hasn’t come to the new venue yet, I’m glad to report that now the furniture is much kinder to your butt.

Every session of LDC starts with a question, so that the audience know what it’s like to be nervous and speak in front of the whole room. This time, the question was ‘what was your best piece of advice’, and loads of good advice was given out but I didn’t make any notes on it. When this was finished, Nicola looked out over the crowded room, and asked if I’d write this blog because the person who is supposed to do it hadn’t turned up. 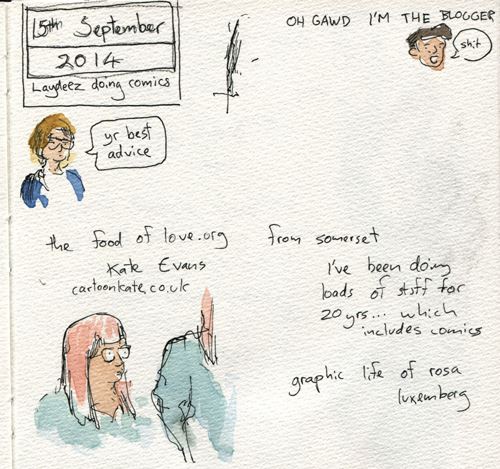 The first presenter was Kate Evans, talking about two of her books. Just published, (By Myriad Editions, who published two of her previous books The Food of Love and Funny Weather) is Bump, a book about childbirth  in a choose-your-own-adventure comic format. I thought this looked great, and was very impressed by Kate’s reading of panels depicting the childbirth process. As Kate stood at the front, saying words like “screaming, pooping, orgasming…” I thought to myself that there could be no more ‘Laydeez Do Comics’ experience than this. Then I remembered I had brought two friends with me and this was their first experience of Laydeez that do Comics. Oops! It’s ok though, I checked, and my friends said they enjoyed themselves. 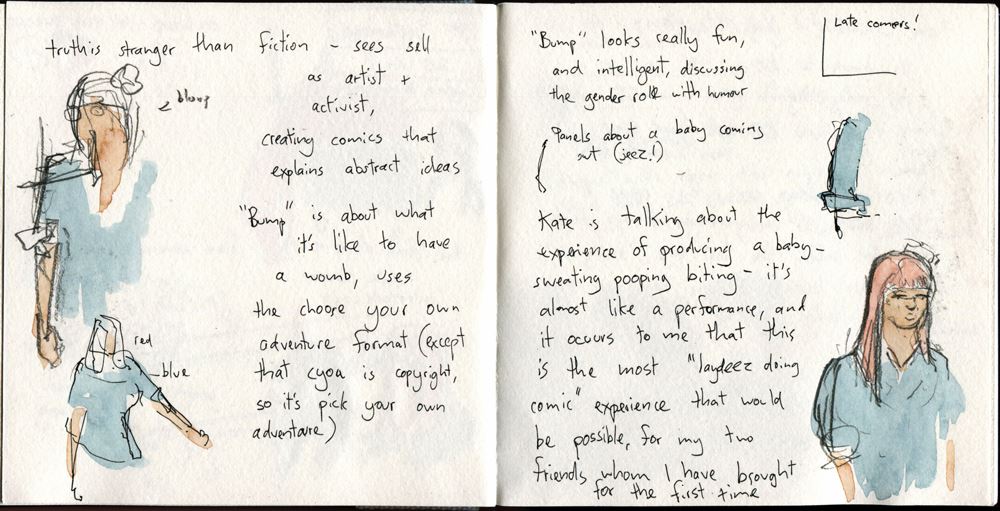 Kate then went on to talk about her biography of Rosa Luxemborg, a work in progress, and showed us some of her rough drafts. Finally, she finished off by showing us a few pages of the Luxemborg book that she had worked up to publication standard, and dipped into her extensive research on the topic. If graphic novels about strident female Communists in pre-War Europe are your thing, than this is the book you have been waiting for. 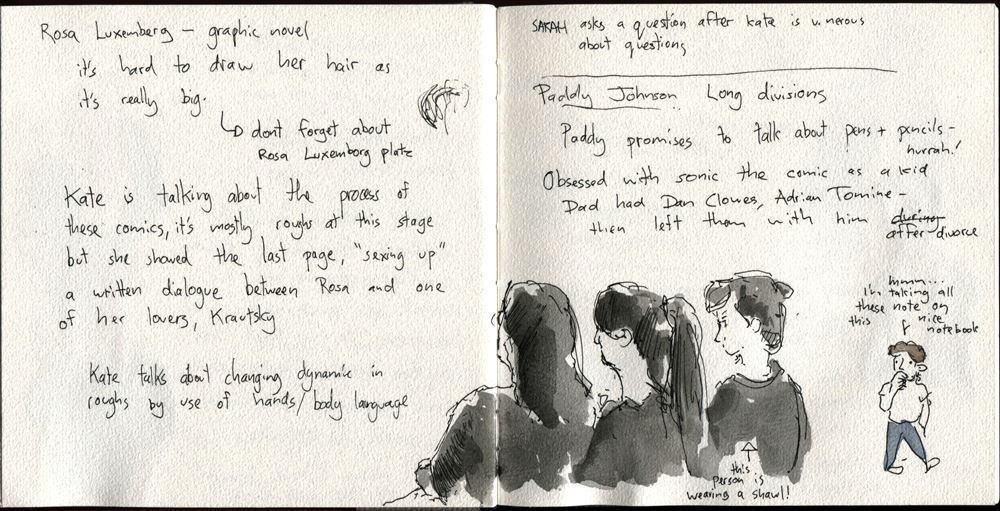 Next was Paddy Johnson, talking about his self-published comic Long Division. Paddy is also a writer and academic (here is his recent essay on Julia Wertz’s career), and he spoke about his shift away from writing fiction into drawing comics whilst studying creative fiction at postgraduate level. His work reminds me a lot of the style of Alec Longstreth, another comic artist heavily into self-publishing. 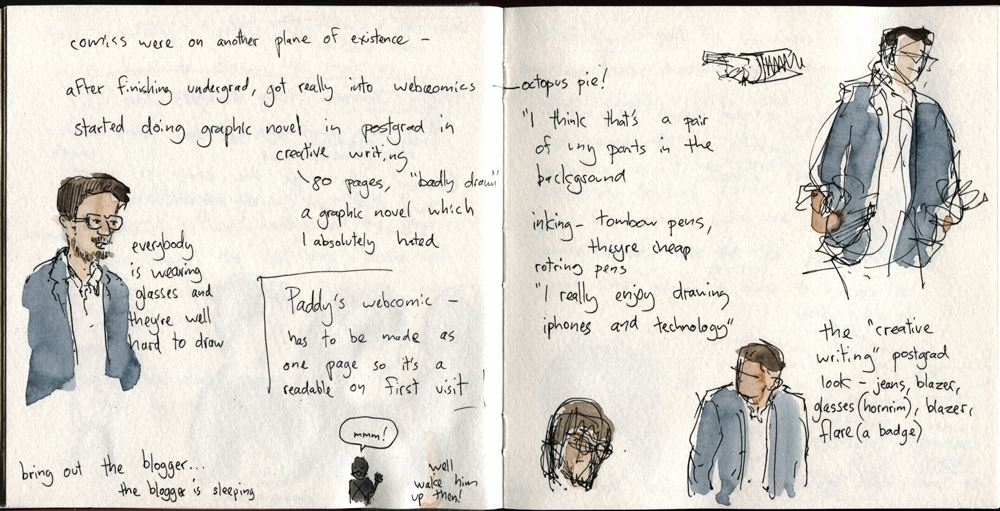 Then, mercifully, it was time for cake.

We were originally told that there would be no cake in the brave new world of Foyles, but at the last minute a reprieve was given. God only knows how Sarah managed to cook a huge apple cake AND an enormous chocolate cake so quickly. If it had been up to me, there would have been an enormous pile of flour and cooking apples, and I would have told people to mix up the ingredients in their stomachs. 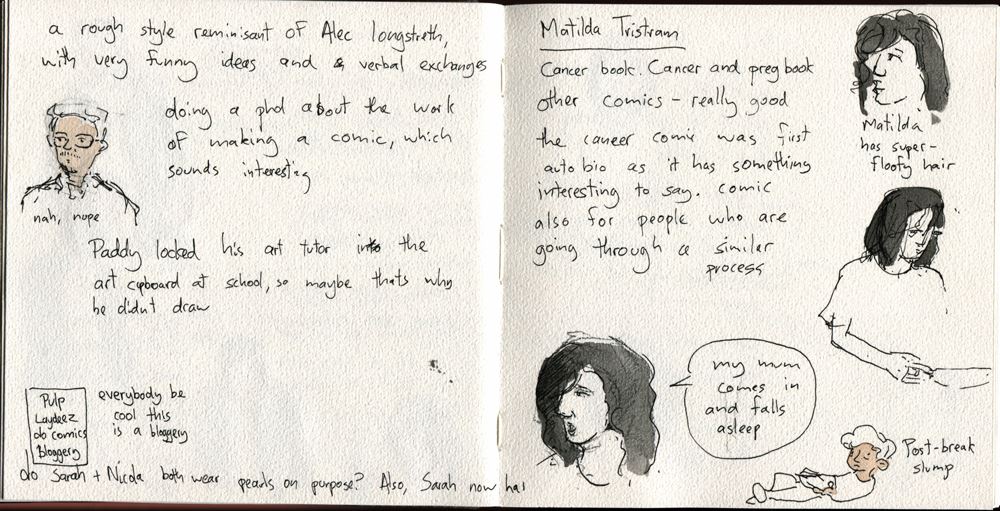 After the break, I felt a bit sleepy and maybe I had to loosen my belt a bit, so my notes were not as good or comprehensive. Which was a shame because Matilda Tristam gave a great talk about her new book, Probably Nothing, (Penguin) a history of her treatment for cancer that she received during pregnancy. 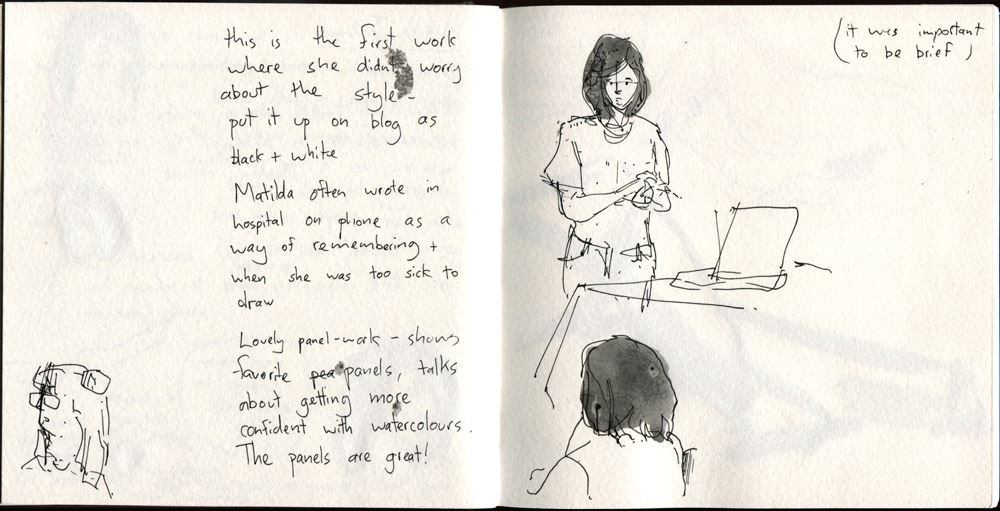 Not only is Matilda a likeable force when presenting her work, but her book is hilarious. The cartoonish style presents some of the most serious things that we face in life – births and deaths – and we’re lucky that she was here to talk about it with us.