Hello there! This is Emily S Rabone blogging for the first EVER Laydeez do Comics Leeds. There is a little bit about me at the end for those interested… (oh the suspense!)

As we travel back in time to Monday 26th November 2012, back when we were busy dreading the Mayan apocalypse, we have a great crowd gathering at the Wharf Chambers for the premiere of ‘Laydeez do Comics Leeds’. The evening’s speakers are Nicola Streeten, Steve Tillotson, and Griselda Pollock.
Before the talks begin, there is a special Laydeez do Comics ice-breaker. We introduce ourselves by giving our name, what we do, what we’d like for the holiday season, and who we would like to see at future events.
In Laydeez do Comics, women are asked to give their full names. This is based on the observation that while men often give their full names, women shy away by giving their first names only. An audience member raised the point that this method of trying to overcome gender inequality seemed in itself a form of discrimination based on sex. Here lies the dilemma faced much too often: ‘Is identifying the socially vulnerable marginalising them further?’ I opted for the full name introduction to stand my ground. (having a common name like Emily was an additional factor)

The introduction also gave the group the opportunity to review our holiday presents list. There were some very interesting suggestions… 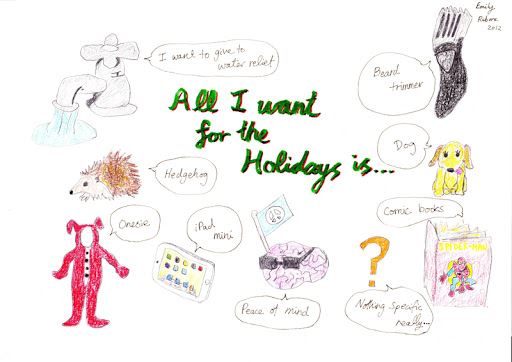 And who did we want to see at future Laydeez do Comics events? There were democratic responses such as  ‘everyone’ and ‘interesting people’, and there were practical responses such as ‘publishers’. And there were also specific, named requests… Simone Lea, Alison Bechdel, Kate Beaton, Posy Simmonds, Lynda Barry… We are looking forward to seeing you in Leeds!
In the meantime, please enjoy the reports from our November meeting. A huge thank you to the first guests of Laydeez do Comics Leeds.

As promised, here is a little bit about myself:
My name is Emily S Rabone, a self-proclaimed writer, comic artist, photographer, and cultural icon (entirely self-proclaimed). I recently graduated with a Master’s degree in Philosophy of Religion from the University of Leeds, and I am now looking for a job. I have been involved with Comics Forum since 2010, which is an academic conference on comics held in Leeds every year. I do not have a website YET, but am working to get one set up. Thank you Helen Iball, Louise Crosby and everyone at Laydeez do Comics for trusting me with the first blog entry for Leeds. 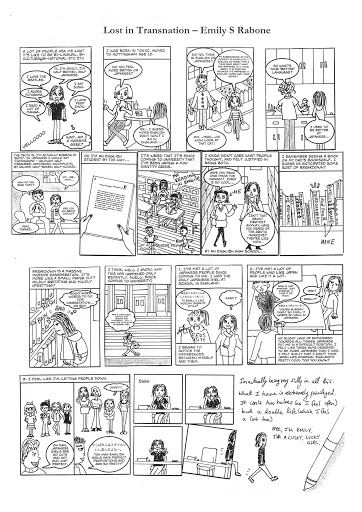