My name is Tara Williamson and I’m a Canadian illustrator living in Glasgow.
I was invited to do the blog for the Glasgow edition of the Laydeez do comics talk on August 11th. You can find my work on tumblr or my on my website.To start off, I’m a terrible person. I was late. As a Canadian, and a relative newcomer to Glasgow. I still manage to totally misjudge transit times and mess up connections. luckily, they hadn’t gotten much further than initial introductions and I hadn’t missed anyone speaking (phew!)
Gillian (from Team Girl Comic) had asked me to share my experience of the August 11 Glasgow Talk back at the beginning of summer and I agreed almost immediately. I checked out the blog and it looked like a lot of fun.
Comic creators in a ted-talks setting? I’m so in. I did some sketches and rough notes while each speaker was talking, hurredly jotting down notes in the semi darkness.
I then compiled these along with my recollections of each speaker and their talk into these 3 Gouache panels depicting each Artist. 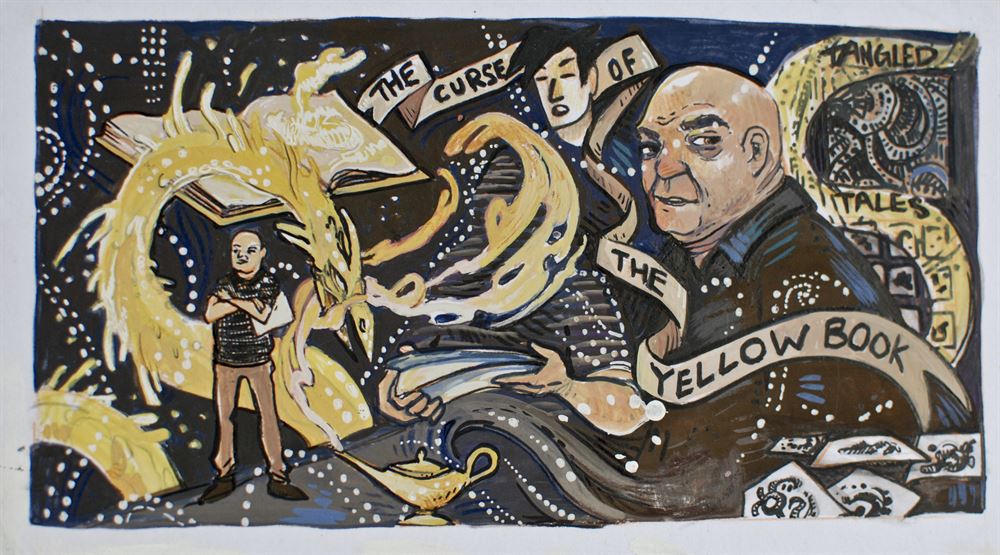 First up was Graham Johnstone (gjohnstone.net). A long-time comics creator and the editor of the zine Dead Trees. He spoke mostly about his new ongoing project The curse of the yellow book.
Graham’s talk was as long and twisty as his proposed epic, weaving elements of mythology, literature and a myriad of other influences into a complex story that he was attempting to explain to us. He spoke briefly at the onset,about his start in comics and some of the projects he’s already completed. My favorite bit of his work is Tangled tales, an apt metaphor for Graham’s talk and a genuinely interesting comic, It consists of six panels with six variations per panel, with endless permutations the reader can alter the comic at will. Its hard to describe, I encourage you to check it out.

His talk mostly focused on his new project, which Graham is clearly passionate about. True to the title, the story features an incendiary  yellow book,
the narrative follows a boring sort of civil servant who’s life is irrevocably changed by the discovery of this book.
Beyond that I remember Graham’s talk as a series of fragmented images, and references to literature. Maybe it was intentional.
The whole talk had a dreamlike quality like much of his work. 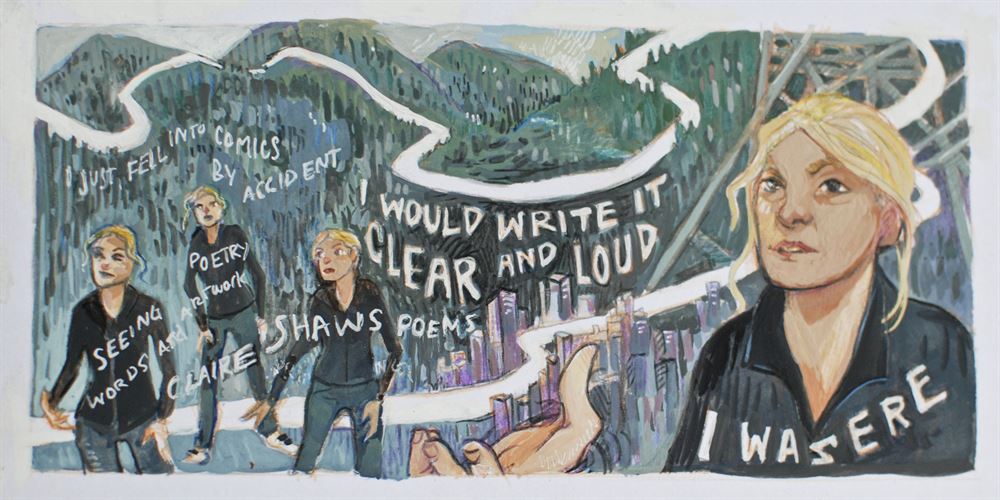 Second up we heard from Louise Crosby illustrator and coordinator of Laydeez Do Comics in Leeds. http://www.lindenartstudio.org/artists/louise-crosby/
Louise comes from a background of Fine arts as an Illustrator and Printmaker. She introduces herself as a fine artist that sort of drifted into comics organically through illustrating the poems of her friend and collaborator Claire Shaw. They call their collaboration Seeing Poetry. She describes her work as a fusion of fine-art and comics, a sort of hybrid form, both and neither. Her early work featured prints with poetry and collages of words and images an early blending of the mediums that led to her later work that more closely follows the comic page format. She talks about the unique constraints of working with complete poems, the challenge and joy of her chosen format. She is passionate about the work of her counterpart, and throughout the talk it is obvious that they are a good team. Dedicated to showcasing the voice and vision of Claire, the poetry is always clear. I took away a sense of passion and consideration, an artist to the last. 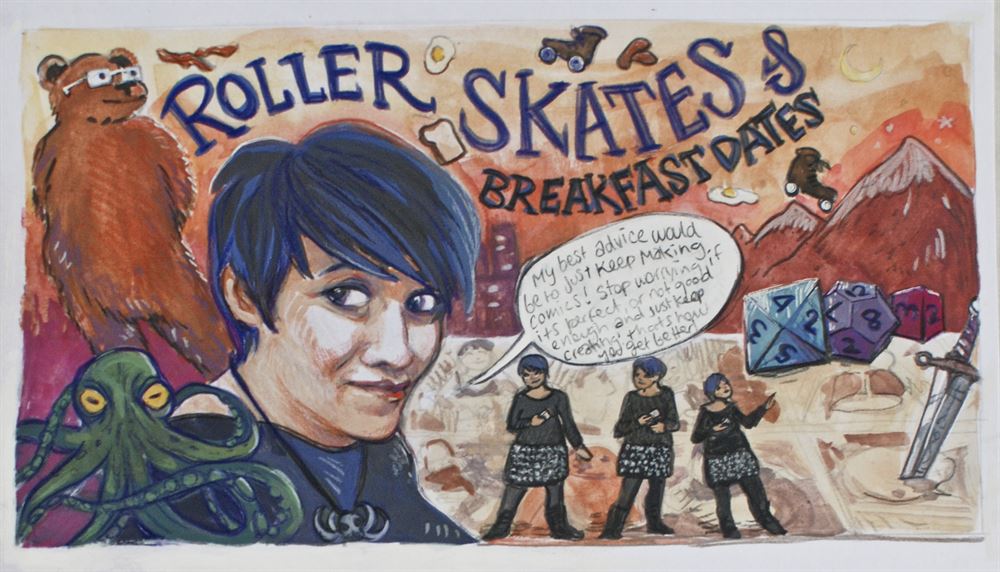 I already know MJ Wallace from Glasgow drink and draw, she is part of Team Girl Comic and a well known member of the Glasgow indie comics scene. She has a webcomic: Roller skates and breakfast dates http://rollerskatesandbreakfastdates.tumblr.com/ a simple and poignant 4 panel strip layout telling stories from her day to day life. Her comic is full of references to classic tabletop gaming comics and genuine human interactions.
Her work and her life are deeply intertwined one reflecting and influencing the other. She is a charming and enthusiastic speaker, describing how she got into comics, the challenges she overcame in accepting and showing her work. Rollerskates and breakfast dates is  a humorous and at times deeply personal account of MJ’s life.
MJ’s talk was brief but really encouraging to new creators. She talked about her shift in perspective that allowed her to show and print her work, developing a process that allowed her room to improve. MJ ended the talk on a fun and lighthearted note, a welcoming and encouraging outlook on the medium, the freedom of self publishing and the acceptance of the independent comics scene. I came away inspired re-vitalized  thinking about my own process, a perspective shift of my own.

All three speakers reflect such different voices in the Indie comics world. Different approaches culminating in a landscape for comics that is vastly different from the dated stereotype of mainstream comics. Demonstrating again that the game has indeed changed. Comics are for everyone, and creators can come from any skill level or background, there’s something for everyone out there, reader or creator.