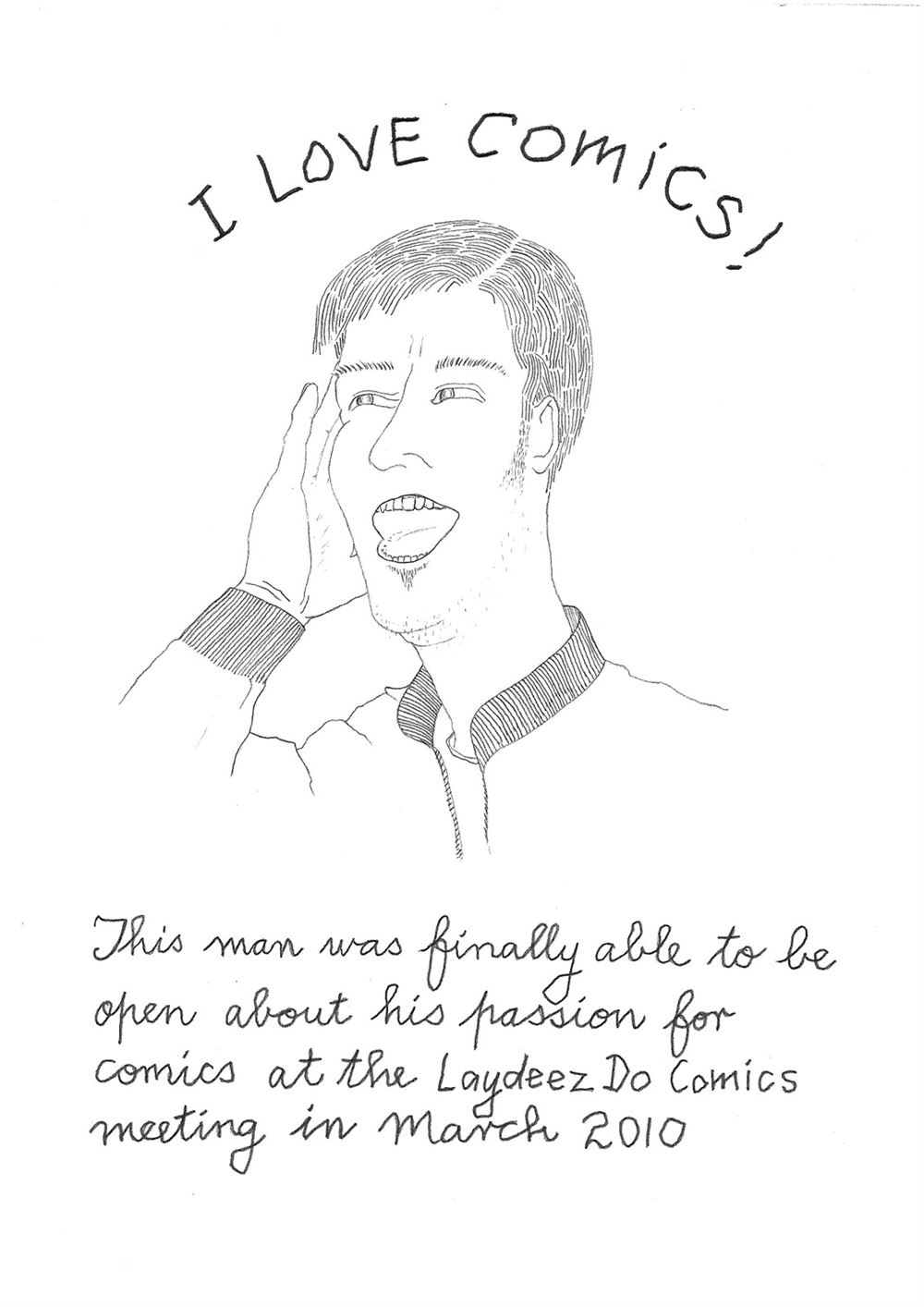 Hi my name is Pam Brabants and I’m guest blogger for this month.

I’m an artist and am currently focussing on pencil drawings with text that have been described as cartoons. Mel Brimfield told me about these meetings last year.

It was great to get inside the Rag Factory on Monday evening, out of the rain and see Nicola’s welcoming smile once more and meet the in-house cat called Sparkly.

Sarah had sent her apologies for not being able to attend triggering a mild wave of panic in the room that there would be none of her delicious cake.

Chairs were arranged, tea was made, wine poured and with the promise of biscuits baked by Nicola’s daughter at interval, 21 of us settled into our semi circle of seats. We did a round of intros which included Jenny showing us a live bottom drawing she did while on the tube, her Evening Standard as sketch pad.

Other things that came up were: The Invention of Hugo Cabret by Brian Selznick; a handmade book by Helen Forde well worth its £8,000 price tag, and the MUST SEE: Celeste Boursier-Mougenot’s commission at The Curve in the Barbican which is on until 23rd of May.

The first speaker was Kate Brown from Oxford comicker & illustrator who talked and showed us through some of her work, including her creation of The Spider Moon with The DFC weekly. Kate said she wanted to encourage girls to read comics and it was with this in mind that she wrote and drew The Spider Moon, as she felt there was nothing like it around when she was a child. Kate recently won the 2010 Arts Foundation Fellowship Graphic Novels award which will be used toward her current project, Fish and Chocolate. This project will be aimed at an adult audience.

The book for discussion was Aromatic Bitters by Erica Sakurazawa. Not many of us had read it and opinion was divided amongst those that had. One liked the focus on the awkward relationships and professional lives of the characters while another thought it the nostalgic writing of a 45 year old. All agreed the power of the manicurist should not be underestimated!

We then broke & mingled for tea and yummy biscuits. Some of our number had brought a few books and cards for sale and also giveaways including brochures for the UniComics Festival 22-24th of April. Nicola thought it would be a good idea to have this mini book stall happen each month.

Jan Wheatley from Margate was this months 10 minute speaker. Jan had a long gap after Art College when she eventually got into writing. She saw her writing and drawings as scripts and then someone told her she had a graphic novel on her hands. Jan showed us pages from part one called Many Happy Returns.

Our final speaker was Karen Rubins. Karen has just finished a 6 month residency as Comics Artist at the V & A Museum As she guided us through some of her work Karen explained that she was obsessed with mythology and its universal resonances. The V & A with its labyrinth building, vast contents and library were a perfect fit for her. She encouraged us all to visit the National Art Library in the V & A which holds a collection of graphic novels and comics in a crypt. They apparently accept donations of comics and graphic novels.

While on her residency she looked at playing cards & tarot which gave birth to Karen’s set of Her Hand of Fate: Comic Strip Playing cards.

Karen wants to do an epic mythological story. She is currently interested in urban beasts and how people’s animal natures influence them. She has a book due out in Sept which has religious icons & blood magic as its theme.

It was close to 9.30pm when we wound up. I didn’t stay for the curry but legged it home instead to catch up on sleep lost from the first day of daylight saving.

Nicola, Sarah and the participants have all created a friendly and relaxed environment for comic curious and comic enthusiasts of both genders at the Laydeez do Comics meetings.

Roll on spring and the next meeting!