Jenny Robins http://www.jennyrobins.com here, illustrator, comic artist and jack of all trades, I’ve been an enthusiastic if not always on time attendee of Laydeez Do Comics since April, although I was a lurking newsletter subscriber for about 3 years before that. If that’s you, I recommend going to the actual events. They’re very good. The edition on Monday was an especially poignant combination of speakers, highlighting the wealth of diversity in artistic modes that is the contemporary comic book scene with much to learn from both the new and old school. One speaker had recently released her first graphic memoir and the other had a long history of cartooning and inner industry comic craft, but both were spot on in their portrayal of both the storytelling power of comics and the love and labour the form asks of its creators, the sacrifices of time, soul and wrist action. I haven’t read any of the books in question, although I of course now want to.

If you’ve never been to Laydeez, or never arrived on time, you won’t know that they usually start with a little intro to the organisation, it’s illustrious feminist heritage and cake fuelled history under the soon returning reign of Sarah Lightman http://www.sarahlightman.com/ and Nicola Streetan http://www.streetenillustration.com , neither of whose names are spelled like I thought they would be.

Then you get a question that everyone has to answer, the theory being that you might remember what someone else said and use it as an ice breaker later when you want to talk to them. Although I’ve not yet managed to remember what anyone said for long enough to do that and usually fall back on my old favourite ice breaker, ‘hello’. Sometimes this has backfired when I’ve accidentally talked to people in the pub after a comic book event that weren’t actually at the event. But less about me, and more about Laydeez. 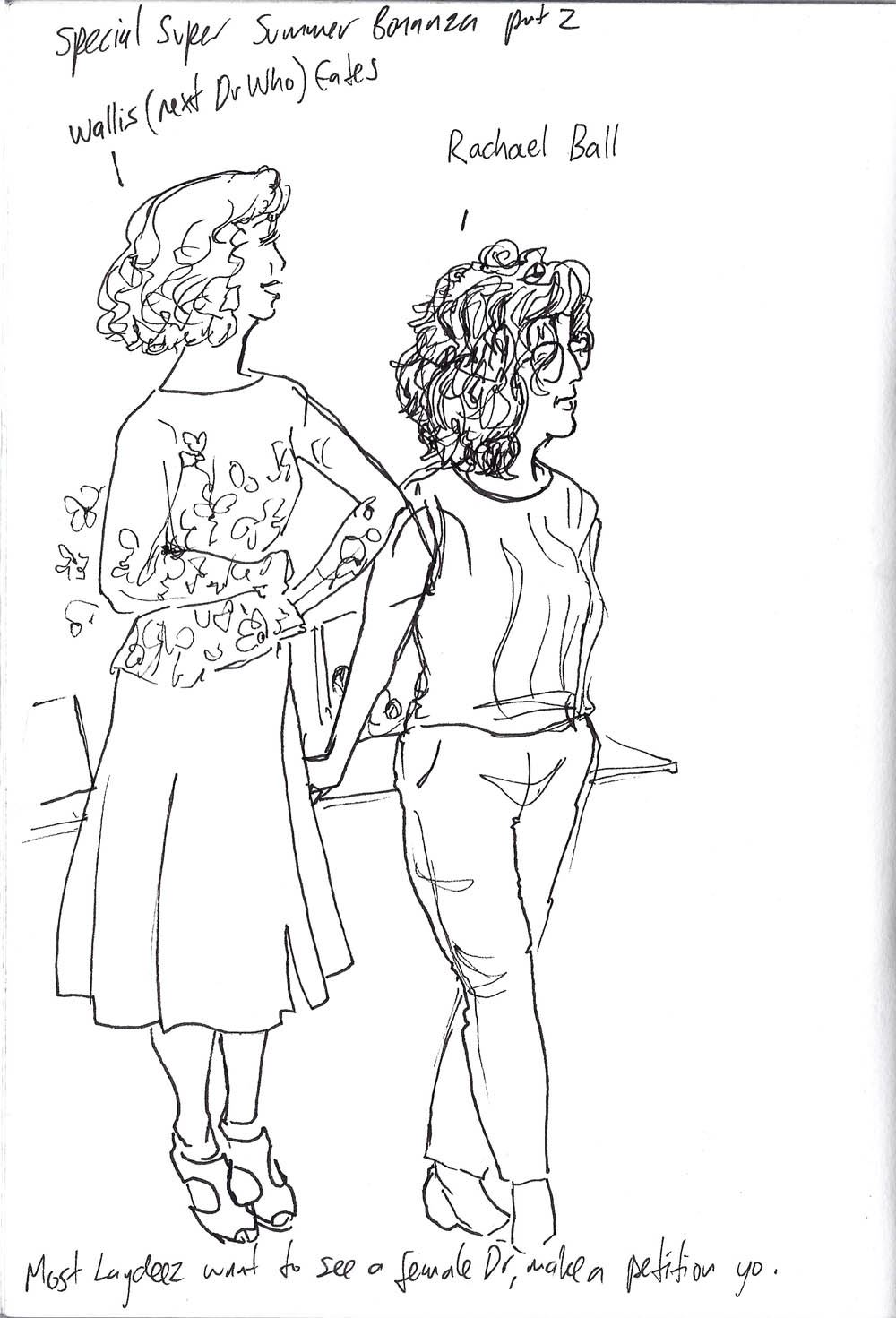 The current reigning matriarchal superpower that is Wallis http://walliseates.tumblr.com/ and Rachael http://rachaelball.tumblr.com/ (both of them tweet more than they tumbl, so I would recommend following them there also) asked the congregated comic lovers who they thought should play the next Dr Who, in deference to Nick’s role as writer on the 10th Doctor comics. Rachael suggested Wallis, probably because of her book fear of species death and the shadow proclamation which you should all buy http://walliseates.bigcartel.com/product/fear-of-mum-death-and-the-shadow-men        I wish I had written down all of the suggestions, also that I had time to draw all of them as Doctors. But I didn’t and I don’t. I do remember Judi Dench and Idris Elba being mentioned, a lot of people were in favour of a female Doctor. Which suggests it’s about time and someone should start one of those online petitions to the BBC. Rachael nominated Wallis. 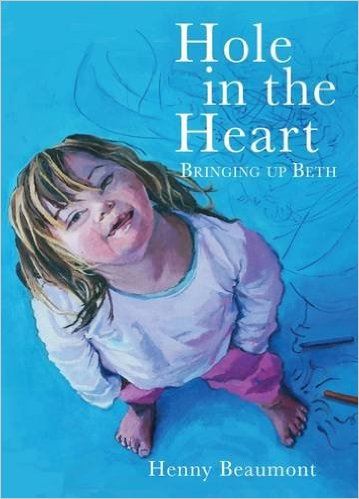 Henny Beaumont then took the floor to talk about her celebrated sky blue tome ‘Hole in the Heart, Bringing up Beth’ recently published by Myriad. It was wonderful to hear about the empowering force in her life of both Laydeez do Comics and Myriad Editions http://www.myriadeditions.com/ both of whom encouraged Beaumont to combine her writing and painting skills in the narrative form. Obviously this work is a personal one, one of a number of powerful works of memoir and graphic medicine celebrated recently at other Laydeez events and clearly a genre that is growing steadily in strength and depth. Hole in the Heart tells the story of Beaumont’s relationship with her daughter Beth, who has Down’s Syndrome. Although she has ‘lots of children’, who joke about when she is going to write a book about them, Henny seems to have hit a nerve with her focus on Beth because the response she’s had from the media and the medical profession show that this is story that needs to be told. This, dare I say it, feminine capacity for narrative testimony in comic form seems to be deeper, harder hitting than many still expect to see from the medium, and is a very powerful tool for communication. Abadzis also touched on this in his talk where he highlighted the growth of visual facilitations in corporate culture, tapping into the inherent “hard wiring” of comics grammar in the human brain. What both of the evening’s speakers show is the potential for words combined with pictures to carry emotional and intellectual messages efficiently and effectively, arguably better than any other medium. 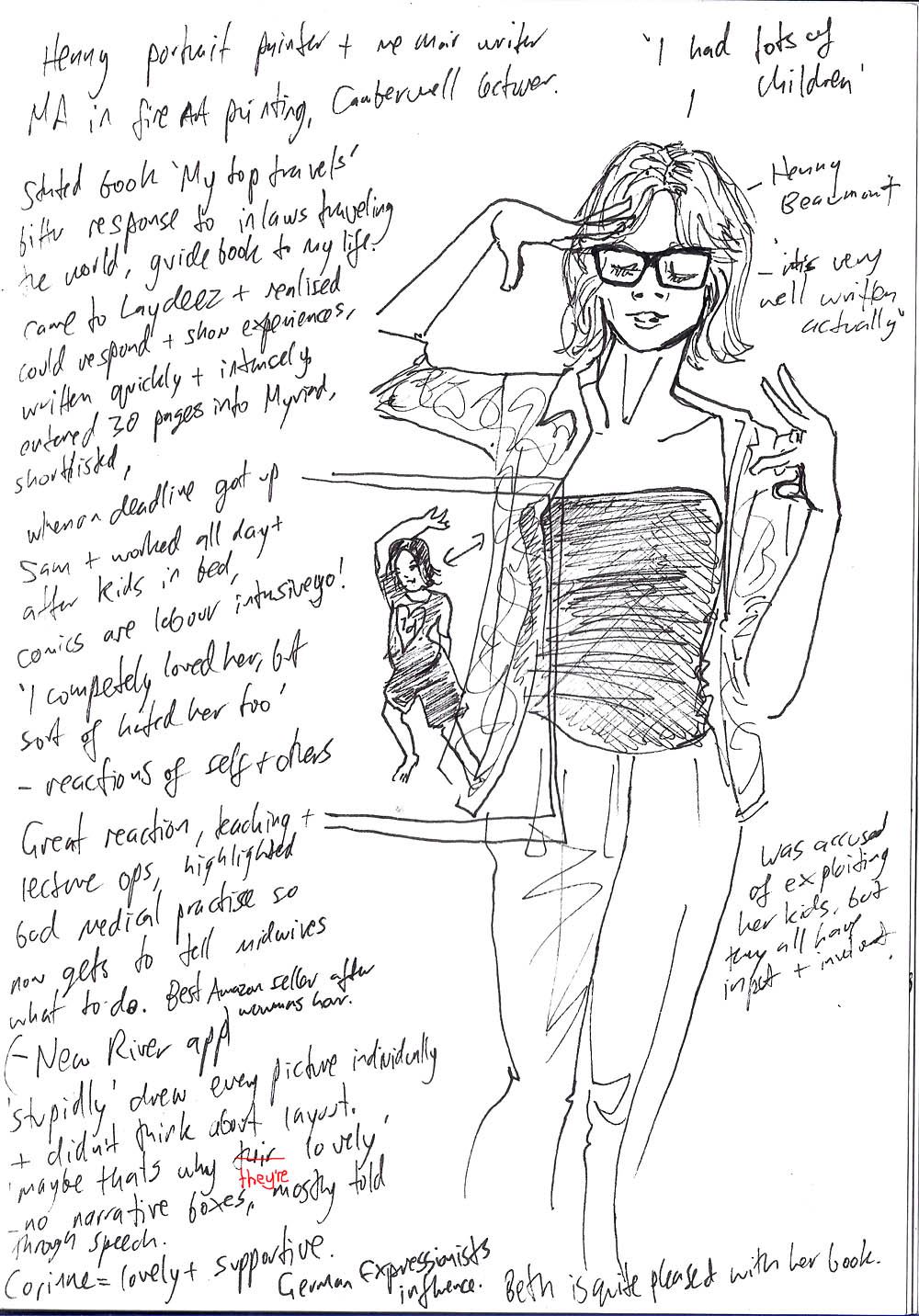 In Hole in the Heart Beaumont painted each panel individually and formatted them together afterwards, she also kept narrative text to an absolute minimum and used speech to carry the story. This approach seems to have created an emotional immediacy that allows her observational art to feel utterly real. Throughout her talk she gesticulated beautifully with her long delicate fingers and one of her final slides showed a painting of Beth striking a dance pose with her fingers expressively flared, radiating confidence. I couldn’t help but draw a parallel (on my sketchbook page) and wonder about the relationship that this mother and daughter must have, learning from each other and growing together. I should probably read the book to find out more about that. And you probably should too. https://www.amazon.co.uk/Hole-Heart-Bringing-Up-Beth/dp/1908434929 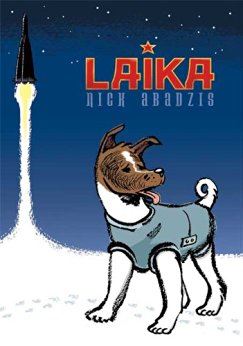 Nick Abadzis then got up to present, Rachael had an introductory spiel about how illustrious his career has been, I only managed to write down ‘all the awards and stuff’ but here’s a Wikipedia link for you https://en.wikipedia.org/wiki/Nick_Abadzis The offering of signed copies of Laika on Gosh’s designated occasional comics table demonstrate what he is most often known for, the Eisner award winning graphic novel about the dog that went into space that one time in the fifties. Nick admitted the fact with obvious ambivalence, mixed but powerful affection for his most famous child which it might be inappropriate for me to compare with Beaumont’s feelings for her actual children referred to in her talk, but I’m going to anyway. 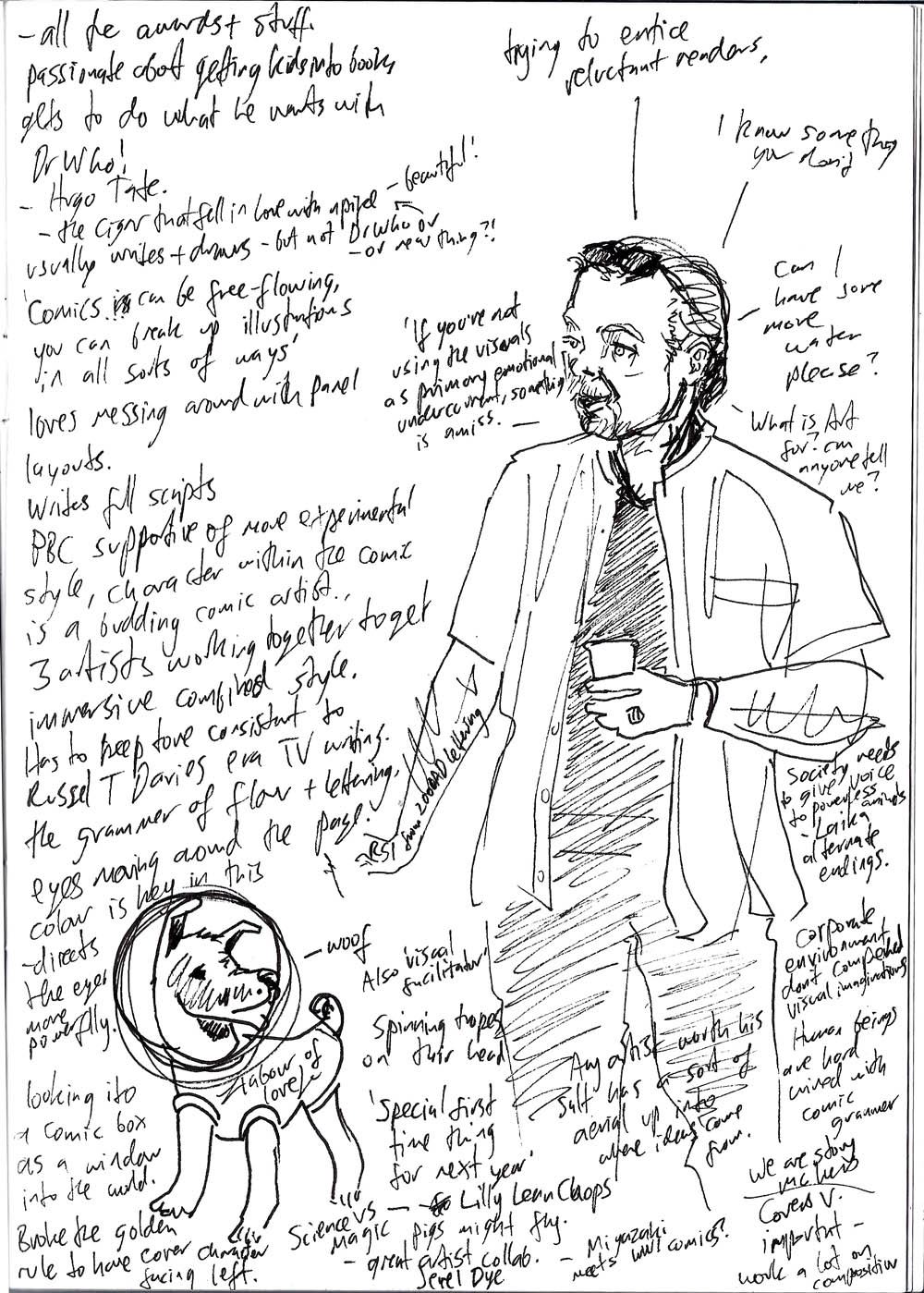 With visuals from a variety of the projects he has worked on over the years, Abadzis dispensed and hinted at a lot of pearls of wisdom gleaned from his long career in the comic book industry. Although very much an artist himself, he often works now with other artists, and showed some great examples of various roughs, pencils, collaborations and process work. Where Beaumont harnessed raw emotion in the relatively unplanned painting of her standalone panels, Nick Abadzis is a master of the planned page, by turns utilising and brazenly breaking the rules of comics syntax, always aware of the flow of the reader’s eye over the words and pictures within and without panels. Like Beaumont he does prefer to minimise narrative text in favour of storytelling through characterisation and dialogue, although one example of where he did the opposite of this was the early pages of his series for The Times, The Trial of the Sober Dog, where he was asked to pander to his publisher’s perception of its readership and keep it safe and Posy Simmondsesque. This relationship with publishers and clients is of course a key thread in a professional creative’s story and Nick touched on the negotiations and endless edits that can happen in comics publishing, something which Henny’s publisher Myriad is known for their kindness and nurturing approach to. He made it clear too, that despite all the awards and the Wikipedia page and stuff, he’s not always making the money he perhaps should be from comic work, especially considering the additional labour intensiveness brought on by such painstaking development.

But that shouldn’t put off aspiring comic book creators, as both of these authors clearly demonstrated. On the one hand because a labour of love is a worthwhile thing, and you have to really love comics to have the sticking power to complete a graphic novel or anything of significant sequence, and on the other because as both demonstrated in different ways, comic communication is our springboard into other fields and opportunities. Henny has been invited to talk and teach on the back of her book, and Nick continues to broach new frontiers in visual facilitating as well as collaborating with teams of creators on diverse projects.

It’s all very inspiring guys. It’s a great time to be into comics.

After that we went to the pub where I considered doing some drawing but didn’t. Wallis said I should use this space to promote myself though, so here is a panel from my current comic project that I’m really pleased with. It’s some coat hangers. You can see more of my comic stuff if you go to http://www.jennyrobins.com and click on comics. Also search for me on the social medias.