My name is Kim Clements and I am relatively new to Laydeez Do Comics. I like to draw and eat chocolate raisins and you can find out more about me here!

Nicola Streeten and Sarah Lightman led the talks and began with some brief comic updates, including that Laydeez will be moving from Foyles in the coming future, so look out for new venues!

The question ‘what have you learnt through social media this week?’ was then directed at the audience for some light hearted introductions. That video of a bear being scared by people and Orvil the Duck, were notable highlights. 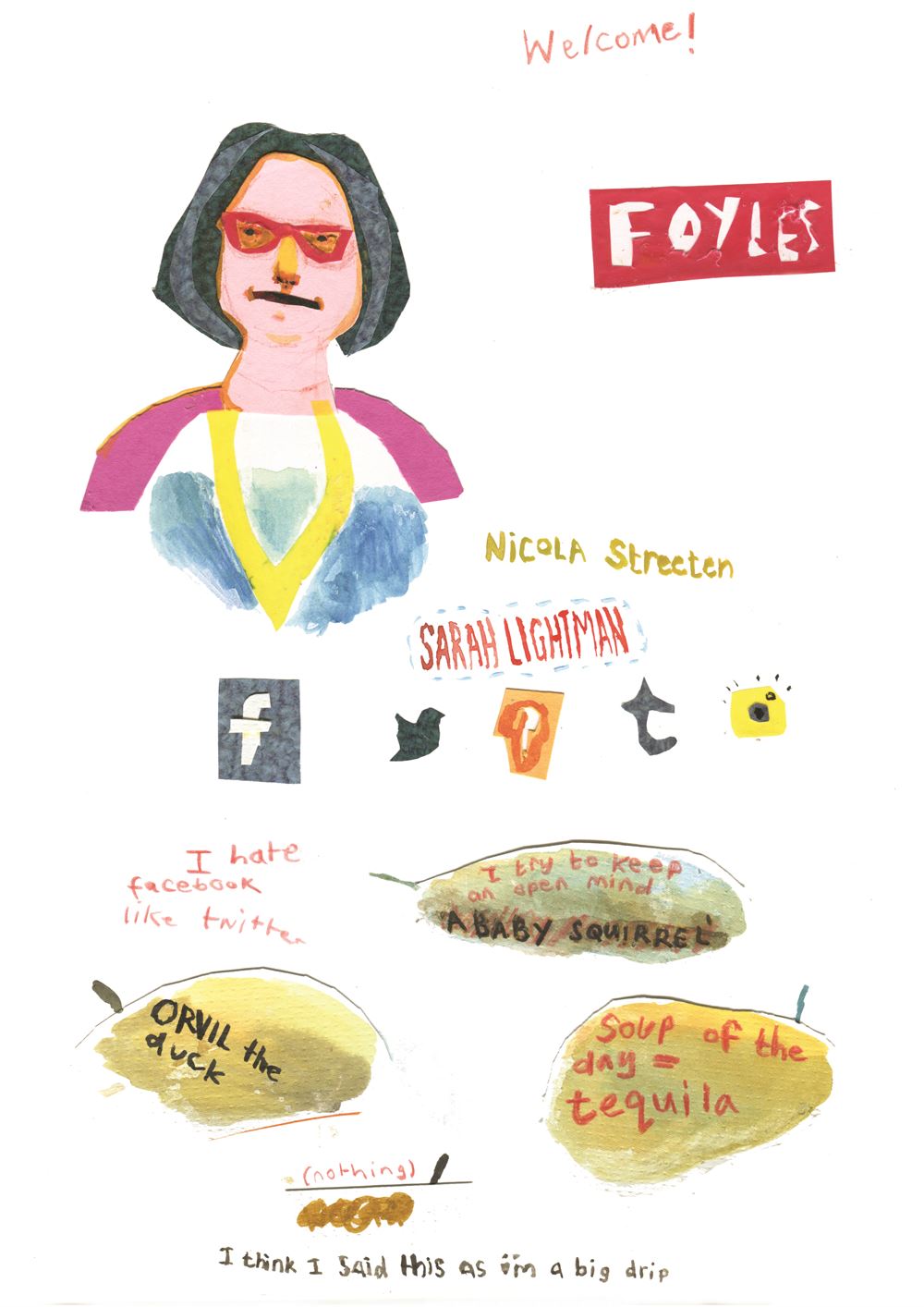 Rebecca Fox was the first speaker and she opened her inspirational talk at Laydeez with advice from Ira Glass, (the producer of This American Life), to keep on making bad art, as ‘through practice and experience you will meet your expectations’.

The accomplished painter and graphic novelist spoke to us about psychology and the subconscious, her link with literature, notably The Yellow Wallpaper by Charlotte Perkin Gilman, and her wonderful encounters with travel, religion and creating emotive stories.

Rebecca’s strong belief in the form of the graphic novel and how it can ‘go beyond fiction’ was reaffirming. A lover of people and ideas, with a degree in post-colonial literature and a history of punk inspired methodologies, Rebecca could back up her points expertly. I really enjoyed hearing her talk and will be looking out for her new Epiphany Series when it is published in the coming year!

Find out more about Rebecca- here! 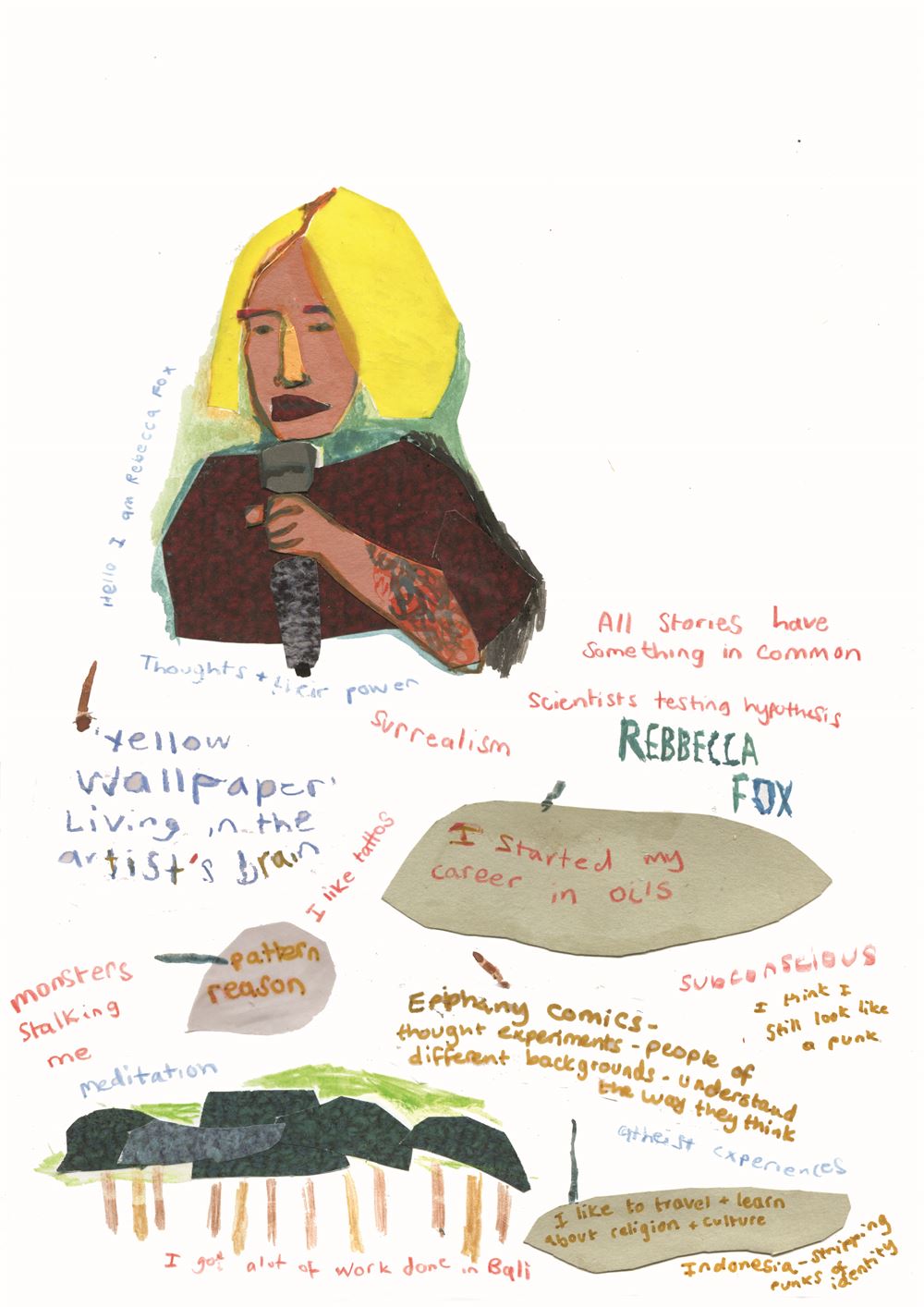 Tilly, Ben and Del the Piggy

Next was an upbeat trio, who like Rebecca Fox had something to say about mental health and using comics to boost awareness. I found Tilly Hughes really uplifting and funny whilst able to strike home about big topics such as tackling autism as an adult, and being independent in-spite of society’s constrictions and ideals.

Ben Connors shared a different side, speaking about comics from an art-school perspective (or as he suggested ‘art-school spectrum’) and spoke of his love of performance and creating comics with Tilly. They complemented each other in a great way throughout the talk and shared projects such as their work with Heart n Soul, a music and comics platform, as well as Snizz Comics. 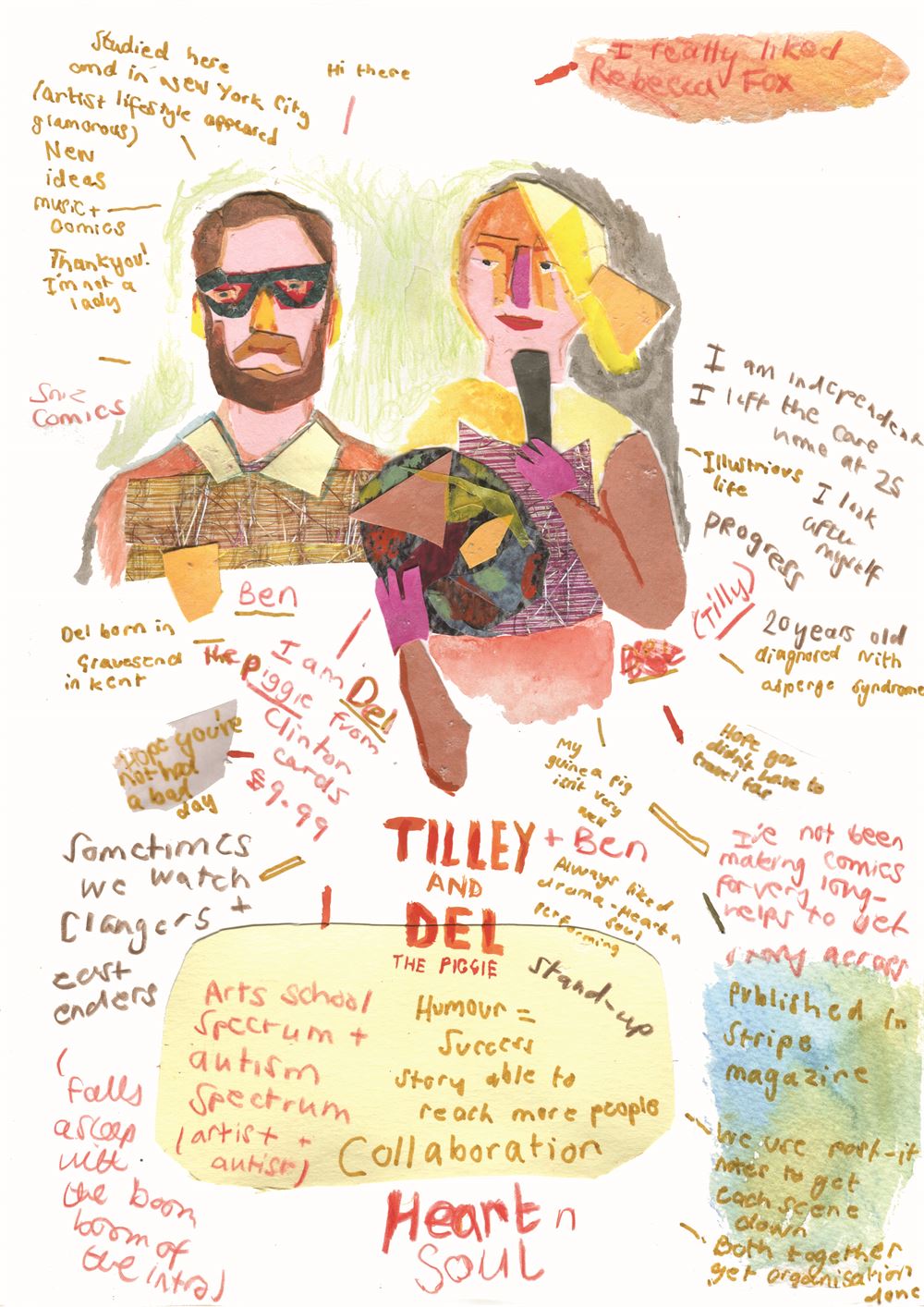 Apologies for misspelling ‘Piggy’ as ‘Piggie’. I got a bit carried away with myself! 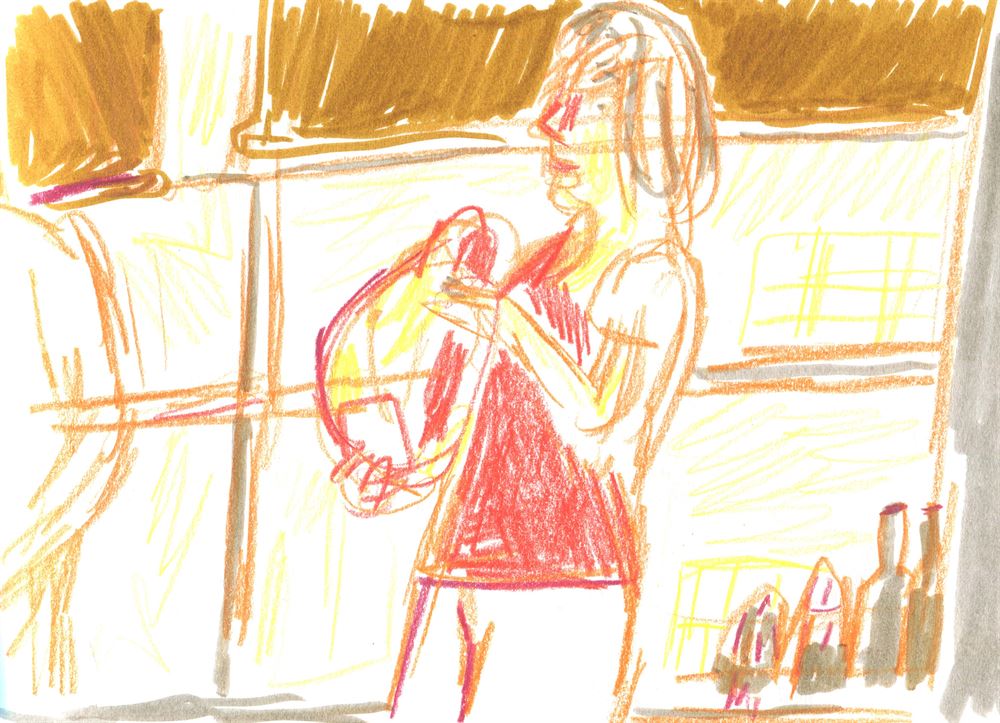 You can find out more about Tilly, Del and Ben by visiting Ben’s blog here!

Last was Anita O’Brien curator and director of The Cartoon Museum  London. A great speaker, Anita was enchanting and very enthusiastic (I managed to draw her a lot as a result of this), and had come to tell us about how the museum works, what it is like to be a part of it and what they have in their collection.

O’Brien also touched upon the Charlie Hedbo tragedy and how she tackled the aftermath of this high calibre media issue with dignity and strength. The power of the subconscious was therefore again very prominent, alongside the clear fact that the pen is still very much potent weapon, and Anita O’Brien was not afraid to talk about this or to give us her viewpoint. 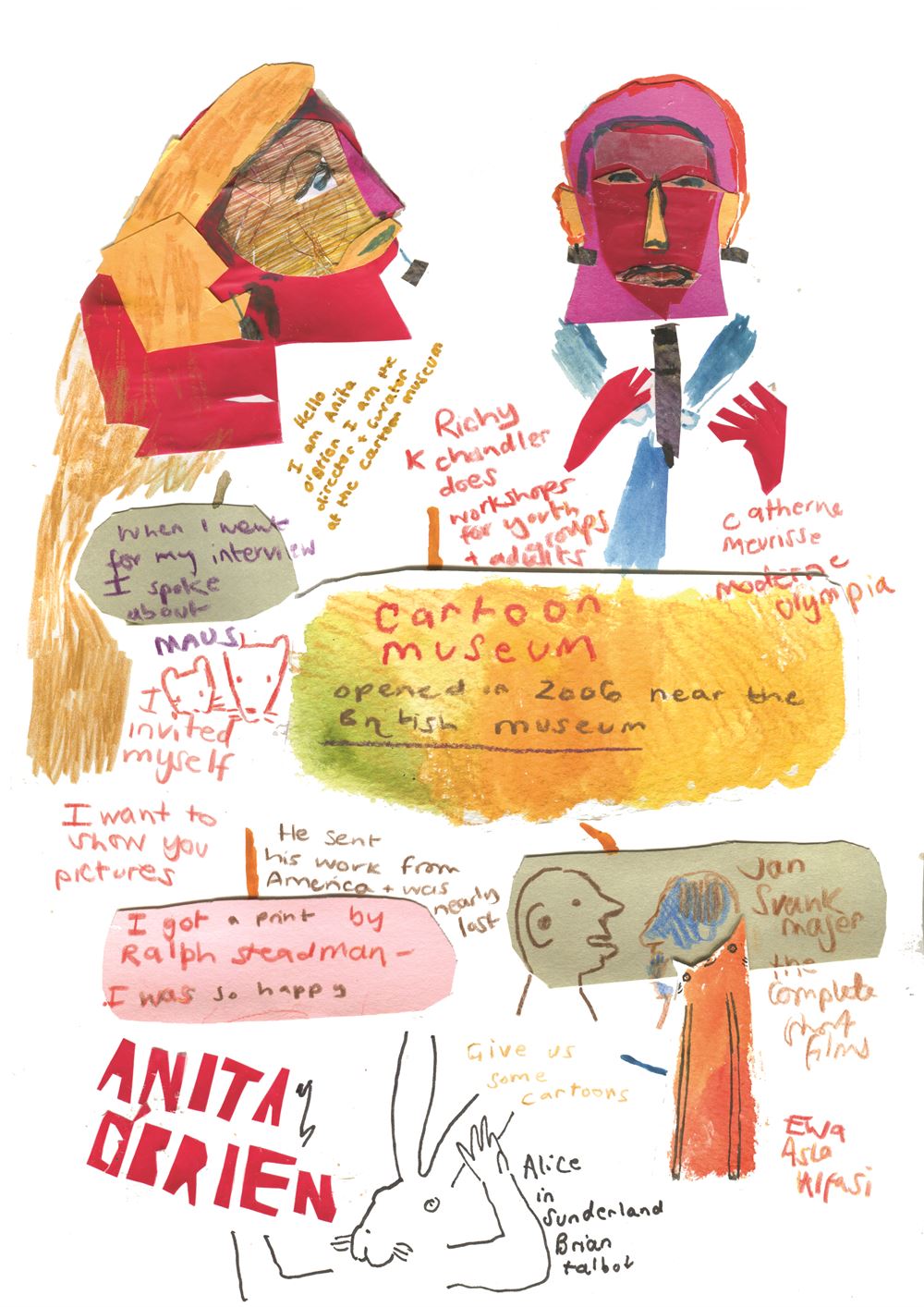 I really enjoyed hearing about Anita’s particular loves, including a glorious tale involving Ralph Steadman and poor postage, and her individual insight into the comics/graphic novel scene.

It was also great to hear about workshops that Laydeez Do Comics’ hardened regular Richy K.Chandler runs at the Cartoon Museum, helping introduce comics to a new audience. 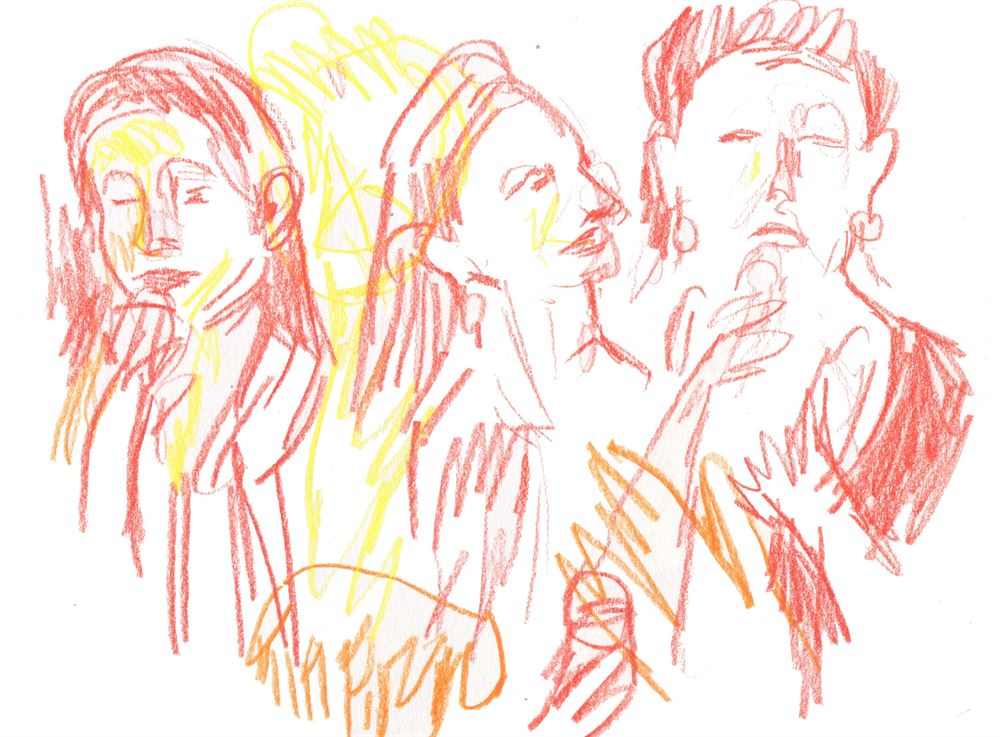 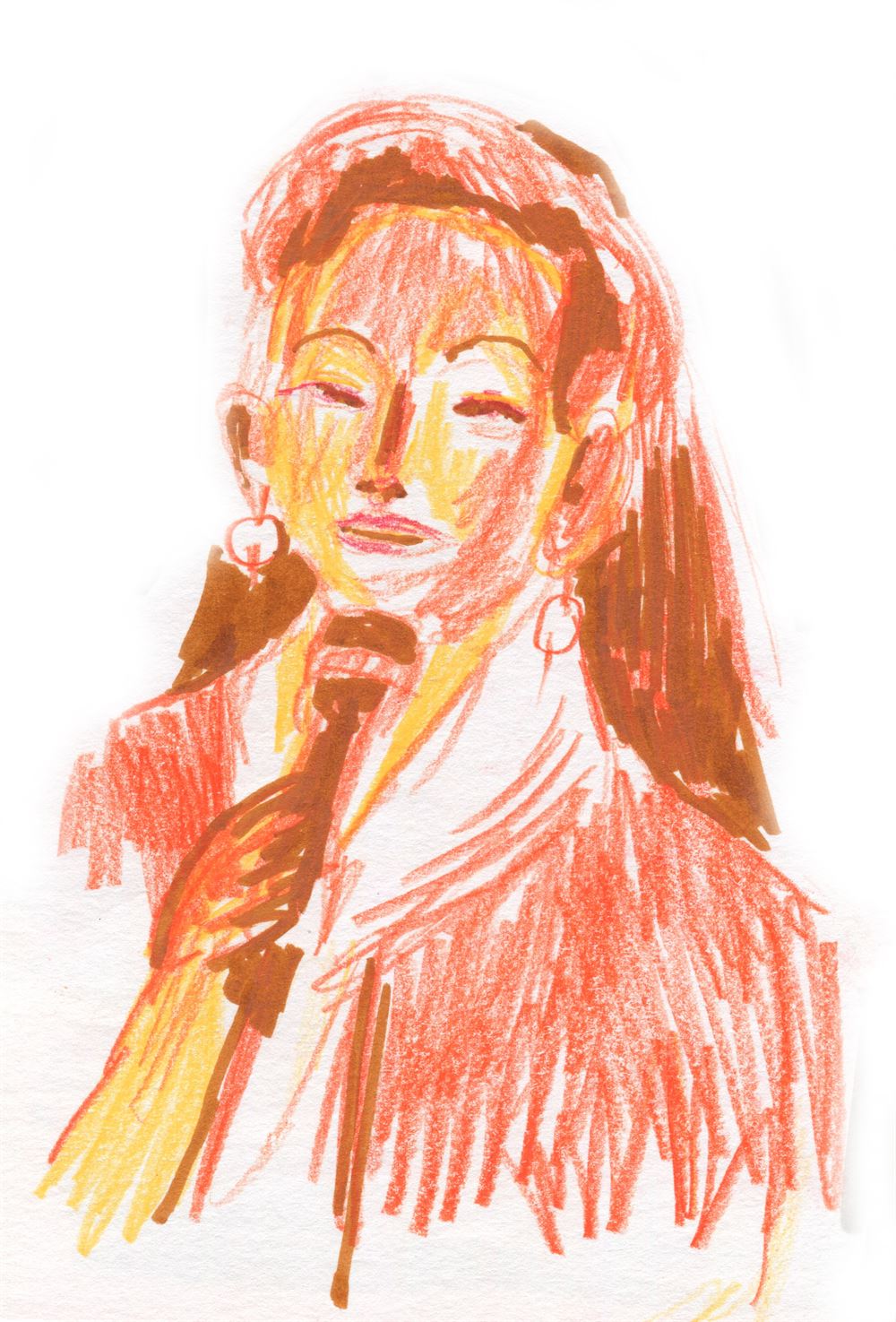 You can visit the Cartoon Museum website by clicking here! And about its ongoing workshops here!