So, it finally happened. I have been asked to be the Laydeez Do Comics Blogguest for the May event! A big honour, but also a big responsibility 🙂
Oh well, if I manage to survive the dreaded introduction + monthly question at the beginning of every Laydeez meetup, I can do everything 🙂

My name is Francesca Mancuso. I work as a web developer in London; I quite like it, but in my spare time I prefer more creative activities.
I’ve always loved drawing; I grew up watching every possible Japanese anime the TV was broadcasting (ie, loads) and reading all the manga I could read. Since I moved to London (from Italy) and met wonderful, talented artists/illustrators/writers, I’ve become more and more interested in graphic novels. The link to my website is http://www.dreamsaddict.com/illustrations 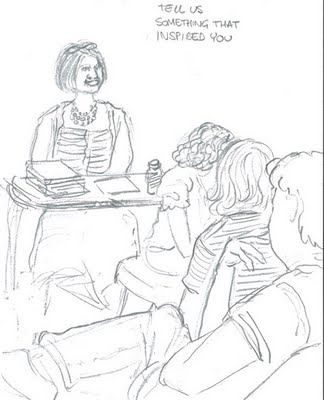 The first presentation was by Paula Knight

Paula has been a freelance illustrator for about 15 years. She has done a lot of children’s illustrations, but recently she is getting into the idea of writing a graphic novel.


Initially she worked with torn paper collage and pencil crayon, but then she had to stop for a while because of a strain injury for tearing a lot of paper!
When she started working again, she began using acrylics.
She has an agent, who often complained that the eyes of her characters were too cartoony. I personally found that they were perfect, but I am a big fan of manga and cute cartoony characters 🙂


She also illustrated a lot of books for education, e.g. safety. We were shown some examples of these illustrations, which were done for publication both in the US and in the UK. So to make the drawings work for both audiences, the person driving the car was sitting in the middle of the car, neither on the left nor on the right!
Then came some samples of illustrations from an anthology of stories for girls (Chicken Licken, Wifred Wolfred), some Christmas card designs for John Lewis (digital work), and an illustrated Korean folk tale (Fat Fox and Fine Crane).
In recent years she has started writing her own stories. She has recently signed her first 2 contracts as an author for picture books (Bright Agency). 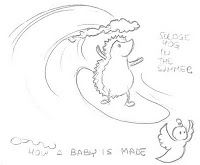 The last part of the talk was dedicated to a short story that Paula entered for the Cape Graphic Short Story competition a few years ago. The title is “How a baby is made – an autobiography of finding out”. It was never meant to be a short story, more like a template for the graphic novel she is going to write. Still, it was surely a good thing for her to have a deadline to work to.


The story starts with Paula as a child, growing up and gradually discovering how a baby is made, which is quite entertaining. But it also includes the story of the 3 miscarriages she had, the last of which was quite painful.
I am personally looking forward to reading this graphic novel, I hope I won’t have to wait too long! 🙂

Alex presents the UK only radio show about comics every Thursday at 5pm on 104.4FM. All the podcasts of his interviews can be found at http://www.alexfitch.com/.


He happened to work for the radio without having any training, starting many years ago working in a video shop in south London. He used to write reviews for the in-house magazine and for the covers of videos/DVDs. One day he tried to get himself fired by writing a terrible review for “A Shark’s Tale”… The review started with: “This is borderline, sexist, homophobic and racist…”… And he got promoted!


At the same time he started putting a few reviews in the internet. Also his flatmate was doing a degree in music technology and he had some work training at Resonance FM, so he invited him to the programme he was producing.
The station was thinking of doing a film show every week and Alex was asked if he wanted to contribute to this show.
He ended up doing the 3rd episode that they broadcast and in a few weeks he was broadcasting every week on Resonance FM.
It didn’t have to be just about film: every kind of narrative was fine, photography, history paintings, comics… Since Alex has always been a fan of comics, he started doing interviews with comic artists.
Paul Gravett was one of the first comics-related people he interviewed.


Soon Alex realised that the Films Show was becoming a Comics Show. He asked to change his show to a Comics Show and got permission. The new name was Panel Borders, mostly because all the other comic terms were taken by other people for websites and magazines!
The first big name he interviewed was Allan Moyle, and after that many doors were opened to him. Recently he has started grouping the shows around a single monthly theme.
Coming soon are medical comics, and next months’ theme will be superhero comics.


Alex is also doing podcasts for other people, like Sci-fi London.
Most important, he does the podcasts for Laydeez Do Comics http://laydeezdopodcasts.wordpress.com 🙂


He also wrote a few comics, 3 in total, 2 of which were entered to the Observer Short Story Competition.
He commissions films reviews in comics format every month for a magazine call The Electric Sheep. 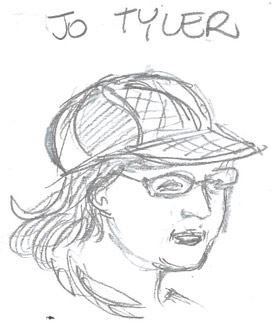 Jo worked for The BBC for 12-15 years, then launched a station called 6 Music in 2002. So her background was very much audio and music (originally a sound producer for the theatre), while in her spare time in London she was digging around comics shops, especially for independent comics.


She doesn’t draw comics herself, even though she claims she is inspired by the fact that you don’t need to draw beautifully to write a good story (same here Jo!).


She left her job because she wasn’t allowed to do what she wanted to do, ie playing with sound. So, without regretting leaving her job, she went to Sundland University and studied for an MA in Radio Production and played around for a year, partly making radio drama, specifically adaptations of the comics she really loved.


After graduating, she did a phD about different radio and the use of sounds in different ways. She called her work (in progress) Pictures to Sound.


The examples we were shown/made listen to were the adaptations of 2 graphic novels.
1. Salmon Doubts by Adam Sacks
2. Lobo published by DC Comics
I enjoyed so much listening to these tracks. It’s not something I can describe easily. I suggest that you listen to the podcast as soon as it is available! 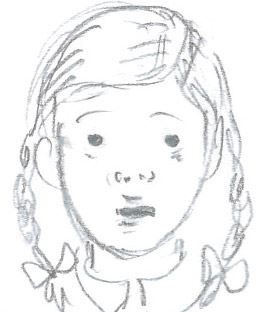 
This is the first time she has given a presentation about her first graphic novel, written in collaboration with her husband Bryan Talbot who created the artwork. Wow, that’s exciting!


As an academic she has been teaching and researching about feminist linguistic and gender studies. She has now retired from academia.


The graphic novel is a graphic memoir, a combination between personal history and biography of James Joyce’s daughter, Lucia Joyce. It starts with her sitting on a train, reading a biography, falling asleep. The plot is a combination of coming-of-age stories, set in two different historical periods, both contrasted by social expectations and gender politics.


Why this connection between Mary and Lucia? Both the women’s parents are called James and Nora. Also, Mary’s father was a Joycean scholar.


Mary’s childhood is set in the 50’s, in Lancashire, in an Anglo catholic environment. She had four big brothers. She discovered gender only at school. At that time girls were segregated and secluded. Father was busy, always argumentative, talking a lot with quotation, Mary a little bratty teenager. The graphic novel explores the contrasting relationship between father and daughter.


I love the fact that Mary’s boards are coloured in sepia, while the scenes from Lucia’s life have a blue tint.


The story follows the fortunes of Joyce’s family. For a while they lived in Trieste (I know this very well, Trieste is my home town!). James was working as an English tutor with methods, that were as unconventional as his personal life. They moved then to Paris, where James found a publisher (Sylvia Beach) and a patron. Lucia was an accomplished dancer. Mary was a dancer as well, even though apparently a much less accomplished one: she didn’t last long, while Lucia did.


Lucia lived in a wonderful period, in the 20s, when she could be involved in a lot of experimental (modernist) dance, while her father was involved in experimental (modernist) writing. She didn’t get support though from her father for her dancing career. Both her parents very discouraging. She was told to stop dancing because it was too hard for her, an obsession that had gone too far.
This had tragic consequences for her. She spent most of her life in mental institutions.


The book is called  Dotter of her Father’s Eyes, is scheduled for publication by Jonathan Cape in the UK and Dark Horse in the US in March 2012, even though it is already complete! Boo, I can’t wait!