Hearing the lives and journeys of comics creators 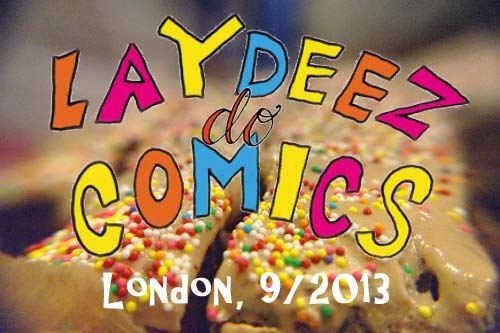 On (most) third Mondays of the month, Foyles bookshop hosts an evening that focuses on autobiographical comics, hosted by the Laydeez: Sarah Lightman and Nicola Streeten. This particular event offered candid insight into journeys of discovery, sometimes fraught with anguish, families offering support and collaboration or judgement and alienation, comics getting to grips with tragedy, humour, irony, and the search for identity.

Coco’s talk introduced a dizzying array of projects, spanning genres such as news reportage, children’s books, humour, fantasy and horror. She’s a prolific creator with a fine art and illustration background at the SLADE and Kingston. As for cultural background she reveals a fascinating yin and yang relationship between her Chinese heritage (from Beijing) and her educational odyssey in the UK (Yorkshire, Oxford, and London). One point which drew out this contrast was her first experience with life drawing at art school, “I was shocked that this person took her clothes off in front of the class!” 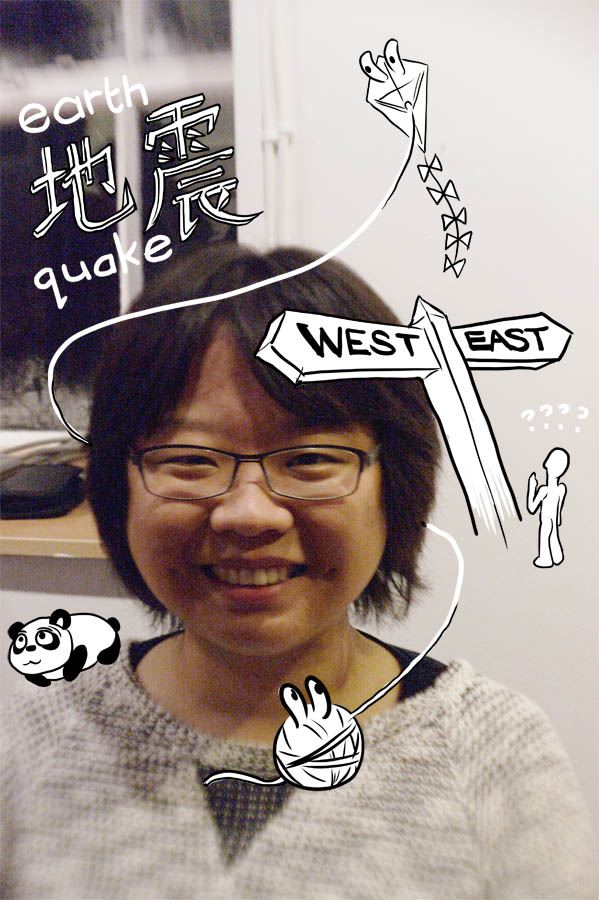 Coco made comics to bridge the intercontinental gap when, on returning to China in 2008, she found herself surrounded by news of the Sichuan earthquake. However, communicating with her network of close friends in Europe revealed a distressing information gap as people based in London were only exposed to flashes of ten seconds or so, nestled among more local news stories. Expressing her turmoil and shock through comics, the EarthquakeStrips that you can see on Coco’s blog translate the Chinese news stories that were emerging at that time. Some brim with tragedy;  we learn of a mother who died making herself into a human shield to protect her child from falling rubble (the child survived). Others highlight more humourous happenings, such as the evacuation of over 60 frightened pandas!

We were given a glimpse of many projects, past, active, and dormant. Her versatility was also a point of adaptation between East and West; the Chinese illustration market happily accepts a varied portfolio and an artist can make a range of different commissions during a career, while the UK market prizes a consistent, homogenous body of work, showing an individual style. Steering her future journey as an artist between different options, and navigating these tensions between East and West, even inwardly wrestling between these opposing forces, Coco seems to find a range of expressions that are true to herself and that resonate with an international audience.

Coco Wang’s principal online presence is her EarthquakeStrips blog. Her illustration work has been published for a range of outlets.

“October 4th 1999, the day I started at the Royal College Art. She disowned me that day with the poignant words, ‘Have a nice life.'”

With this declaration that there’ll be no brakes on this rollercoaster of a talk, Wallis thrust us through her Mumoirs, slices of her conflicted household relationship between a single parent and a lone child. Along the way we learn of a search for her father, imaginary friends, the other men who entered and left mum’s life, trying to mingle at a residential association meeting, and other snapshots both gut-wrenching and banal, the imprints of lives lived and deaths died in a council block. 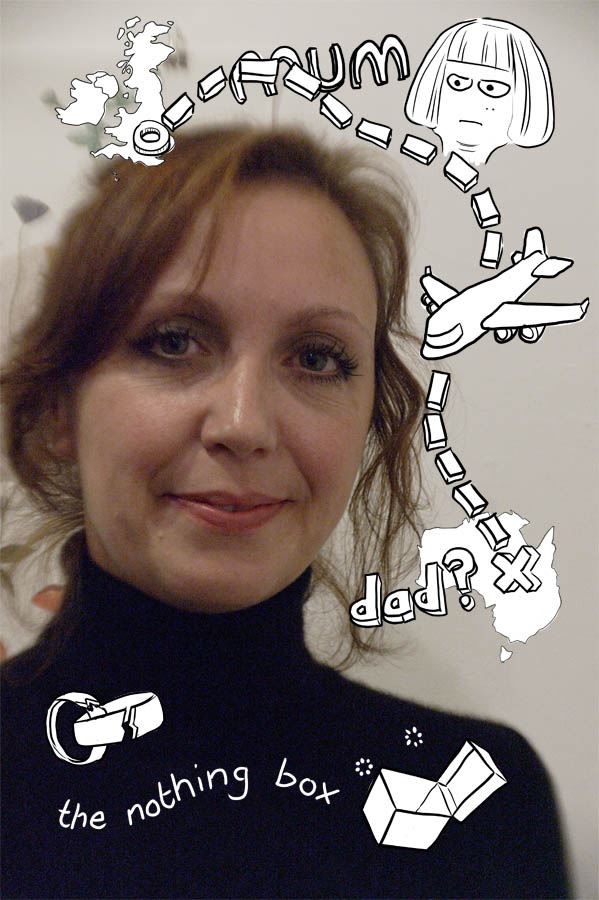 “She suddenly had a realisation that she’d spent all her 20s looking after me and not having any fun. So she did a massive U-turn overnight.”

The recollection that leaves the greatest impression on me is accompanied by a picture of mum staring, staring at her daughter for ages, gaze brimming with blame at a point where she pivots about her 30th birthday and comes to rue the decade spent bringing up her child, followed by a plunge into all the drugs, boyfriends and sex she’d been missing out on during those years. Wallis explains plans for the graphic memoir to contain pop-ups of fleeting faces with the stories of individuals such as Dead Dave and Jilted Jolene.

“The tiny things that are nothingy, I find these important because these make up our existence.”

Despite the heaviness of much of the content, Wallis speaks with a thick-skinned cheeriness, with eyes open to the blackly morbid but also to the mingled shades of irony and the warming memories of simple times. A friend put her finger in my glue. Mum bantering to me as a three-year-old. Doing nothing at all. “That is as much of life as anything else.”

You Chew I Spew comes across as a light-hearted counterpoint to the Mumoirs, albeit with a sober sense of responsibility. It started when friends asked Wallis if she’d draw their memories. The invitation is freely open to submit one short paragraph for interpretation.

Wallis Eates can be found online at The Chews and Spews of Wallis Eates, where you can explore the Mumoirs and You Chew I Spew.

The evening’s final talk told a story of growing up similar but different, one sister becoming an artist, the other a writer; what better circumstances for comics collaborations? Like Wallis, Ginny and Penny grew up reading Bunty and Mandy, an indication of the influence of these forgotten girls’ titles. Their early collaborative projects were short stories, one about a woman who finds a glass eye on the bottom of a swimming pool, another a short murder mystery ending in a punchline.

Ginny and Penny explained how their collaborative style evolved through practice and considered decisions such as taking the Arvon graphic novel course, a residential training week for aspiring comics creators. The introduction to thumbnailing helped Penny appreciate how difficult it is to draw a comic, but gave her insight into the process of interpreting script as images. Later, they disclosed, they found they became able to time-effectively reach consensus on storytelling means by arguing with each other (constructively).

The Arvon course led to a three-part comic: The Art Room, which was a unified story told from three different points of view. This turned into a painful lesson in over-complexity. On the writing side of things, continuity was a real challenge to maintain, and in the artwork they spent ages trying to digitally re-create printed tone in veneration of the pages of Mandy. 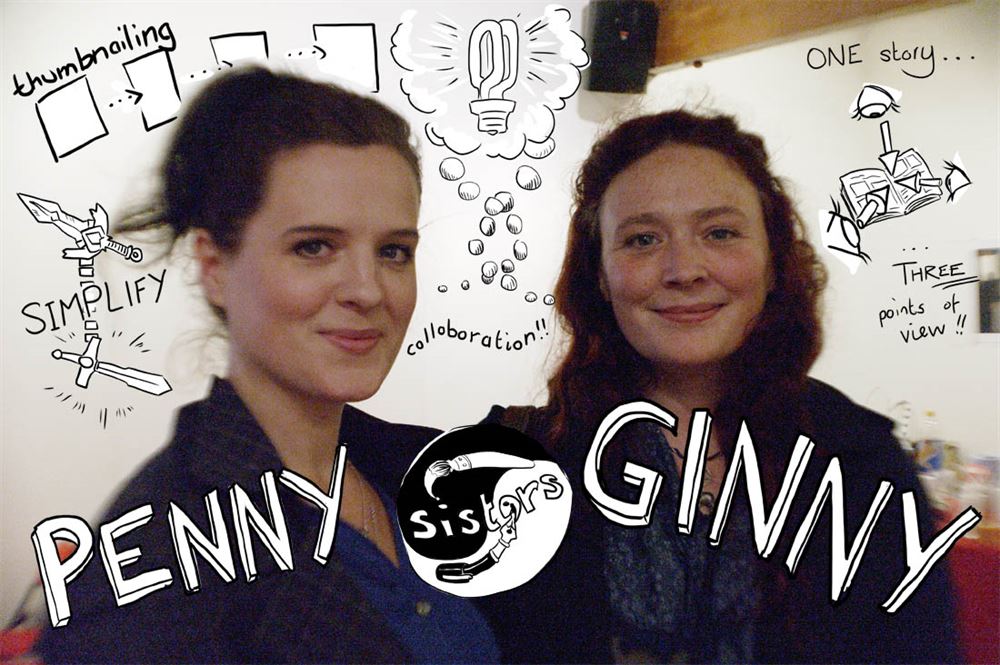 Having learned that hard lesson from The Art Room, the principle to start with and maintain simplicity guided their next project’s development. Briony Hatch goes to school, and, being neither popular, sporty, nor fashionable, seeks escape from the mundaneness of everyday life in the pages of a high fantasy, swords-and-sorcery epic. Ginny’s artwork evokes the childlike spirit of the girls’ comics, while Penny scribes cutting commentary on the lives of the surrounding people in Briony’s thought bubbles. Pages of Briony Hatch will surely resonate with the childhood and teenage memories of many a female geek reader.

The Skinner sisters have a Skinner Sisters website, with details about Briony Hatch and other projects.

I draw and I write and I combine these efforts to make comics, mostly. Other things I make and help to realise include videogames, non-digital games, events, learning opportunities, and hybrids of all the above. At time of writing, my website is “coming soon” status, but my blog is here. You can often find me under the creative ID “emeraldsong” (sometimes emeralds0ng with a zero) in places such as these: