About me – I was invited to be guest blogger at London’s Laydeez do Comics in October 2013, exciting! I’m Keara Stewart, a comics lover and maker. I graduated from Camberwell College of Arts (BA Hons Drawing) in 2007. Some of my first drawings to appear in print were my cut-out-and-keep entertainment collectors cards in ARTY #24, a Transition Gallery publication. I’m currently working on a comic pamphlet for Researcher Hannah Zeilig, as part of an AHRC funded project into Arts and Dementia. I’m also excited to be collaborating on an illustrated story with the remarkable Ravi Thornton. Also in October, my drawings were exhibited as part of Mirror Mirror at London College of Fashion. You can follow me on twitter and see my posts on tumblr.

My love of comics is slowly taking over my life (in a good way!) and of all the events and talks out there, nowhere has a more inspiring and supportive atmosphere than Laydeez do Comics. The evening began with the fabulous duo, Nicola Streeten and Sarah Lightman introducing themselves…

..and then ‘The Question’, which this month asked us about something we have lost… As usual there was a range of answers, some hilarious, some painful! Answers included: “I think on Saturday I lost my dignity” “I lost my temper” “I lost five cameras in one trip! But it did mean I had to draw absolutely everything” “I always lose stuff in my hair”

First to present was Roz Streeten… Roz Streeten is the creator of the hugely successful ‘Rosie Flo’s colouring Books‘. The idea for the books came out of endless drawing requests from her two daughters, Sophie and Sasha. It began with drawing after drawing of dresses to which her daughters could add heads, arms and legs. Roz knew that her daughters couldn’t be the only ones “who wanted dress after dress after dress” and so the first Rosie Flo Colouring Book was born!

From the very beginning the books have been self published. For the first book, Roz took a financial risk in printing 800 books, as although she didn’t know what the reception would be, this kept the unit price down. First stop was Daunt Books in Hampstead. The lady there asked what they were priced at and Roz said maybe £6.00. Daunt Books recommended £5.99 and bought 9 copies of the book, a result! Roz went on to 17 more bookshops and sold out – they have now been selling in the Tate Bookshop for over nine years! Ros has also taken The Rosie Flo Books to Camp Bestival and other events to publicize them. 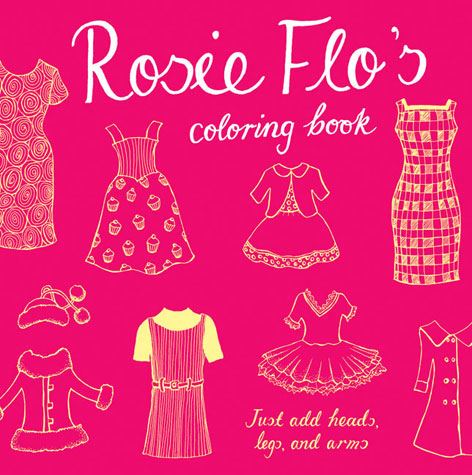 One of the unique selling points of the Rosie Flo books are the thin lines of the drawings. For younger children, they don’t have to worry about colour going over the edges, but because they do not have the thick lines of other colouring books they also appeal to older children up to about twelve years old. The different themes of the books include Animals (with various dresses including a fish dress with fins), Sporty (including a super shuttlecock dress) Arty (with a fabulous melting Salvador Dali dress) and Johnny Joe’s (including pirates, flying and diving gear). Though they do have girls and boys names, they are not prescribed as for being for particular sexes, with Roz describing in relation to gender stereotyping the books that “it’s really our own preconceptions”. She has found that although boys don’t use the Rosie Flo books so much, girls tend not to distinguish between Johnny Joe’s and Rosie Flo’s. Of all the colouring books, there are two that I am most drawn to, because of their material and concept. Firstly, The Rosie Flo Night-time Colouring book, which is printed on black paper with white line drawings. The second is the Rosie Flo Kitchen Colouring Book, (including sweet corn and broccoli dresses) which has some pages printed on baking paper to create different layers of the dress. Since then, The Rosie Flo Colouring Books have grown to include posters and colouring-in-kit-models including a catwalk kit. The kit that started off as a cafe was transformed, after a suggestion from Roz’s husband and co-director of the company, that she turn the lid into a pool – and so the cafe became a pool party! Roz describes how with the kits you can “create your own characters and then play with them”. In Japan, adults have also embraced the Rosie Flo Colouring Books and this led to a successful Rosie Flo Colouring Competition in the country!

Although she was asked if she would ever consider a deal with a publisher, Roz Streeten continues to self publish (using offset litho for printing) as this gives her full control and is more financially rewarding. It was a great talk which gave us a real insight on how to follow through an idea into print. I urge you all to buy The Rosie Flo Colouring books as Christmas presents for any children in your life – I certainly have! Up next was Marina Magi…

Marina Magi has been drawing comics since she was 3 years old. She studied Fine Arts in Argentina and spoke to us at Laydeez do Comics about various projects. While showing images of her varied comic styles, Marina described to us her Manga and fashion influences.

Marina gave us an insight into ‘Romeos’, a story about human trafficking in Argentina and the conspiracies surrounding this, relating to the Argentine Government. Marina had been advised to make ‘Romeos’ erotic, rather than pornographic, but she disagreed – “I didn’t want to make it classy, I wanted to make it rough and I wanted to make it ugly because I think that must be the world that these people live in”. It is about a guy that works in a bar as a prostitute and who daydreams about being a musician. It is a ten issue comic, that is interconnected and tells the same story but told from different views. Marina explained her fascination with how the characters can tell you what they want to be, that she felt that the characters were guiding her in her telling of the story. She imagines what kind of music the character would listen to, for example. An exhibition of the Romeo drawings was also held in Argentina, which received great feedback.

In response to a question, Marina described some of the stories she came across through her research into trafficking nets in Argentina and across the world. She spoke about how living in this world as a female, you have to be careful, not to go out alone, but that this applies to males too, and her Romeos comic highlights this. Marina is currently working on a website, but until then you can follow her on twitter!

We then had the all important break to get to know each other and to eat Sarah Lightman’s famous cakes – the chocolate cake was the best yet!

I took the opportunity to chat to the hugely talented Wallis Eates, who spoke at last month’s LDC…and to draw this gentleman who was talking to Katie Green, our final speaker…

Last to present was Katie Green…

Katie Green, creator of the much loved zine, ‘The Green Bean‘ was invited to LDC to talk about her latest work, her first full length graphic novel, the stupendous ‘Lighter Than My Shadow’ (published by Jonathan Cape) and children’s book, ‘The Crystal Mirror’ (Vala Publishing), which she has illustrated. Katie’s love of animals and desire to be like David Attenborough played a part in her studying for a biology degree. It was her Art Foundation Course though, following her degree, that was more suited to her as she explained that she got to “animate bunnies rather than cutting them up!” With ‘The Green Bean’, Katie told us that “basically, I just love drawing”. Luckily for us, we get to share in her creativity, reading about her loves and interests and favourite books. ‘Lighter Than My Shadow’ is Katie’s first graphic novel which is 500 pages long and took five years to complete. It explores her life while suffering from anorexia and her recovery, “I was anorexic. I’m not anymore”. Many people have asked whether it was a cathartic experience writing the book. The Green Bean, Volume 4, Issue 1 focused on the process of creating LTMS which in every way was cathartic. This was not the case with the book itself. It was a difficult journey to recovery and is an ongoing process, “I used to think that recovery was closing the door and leaving everything behind”. If anything, Katie has experienced the opposite, especially as while writing the book her disease became part of her identity again. Once Katie was diagnosed with anorexia, she was frustrated to find that there were no books that were any help to her or her family. They either told you to think positively, snap out of it and you’ll be ok, or that you would never recover. Katie had drawn a picture to try and explain her disease to her family, which was later used to communicate with nurses and doctors, to try and articulate how she felt. This drawing was a starting point when she had the idea to write her own book, which she hoped would be “the book about recovery”. Physically and mentally, she went through many ups and downs which meant it took many years before she was able to begin work on the book. Katie has been brave enough to return to return to some painful memories in order to create a book that she hopes will help others. She wanted to write an honest book, “I really wanted to not shy away from the hardest things about it. But also show that you can recover”. Without a doubt, I feel she has achieved this and that her book will help sufferers and their families too.

In the book, Katie’s illness is represented as a dark black cloud and as the disease gets worse, the cloud gets bigger, engulfing her whole family. After being sexually abused, the cloud changes shape, as she begins to binge eat. Binge eating is an eating disorder which is in many ways, far less understood than anorexia. Katie describes how as a culture “we slightly admire and revere anorexia… bingeing and abuse particularly, we are disgusted by”. This is something she wanted to address, her belief in the importance of changing attitudes and also to show that there is always hope of recovery. Katie’s talk generated lots of discussion, from who the book is helpful to, to issues surrounding her abuser and whether or not to report him and also how she managed her time in order to complete the book. Katie was able to secure funding from the Arts Council (following her time at the Arvon Foundation) which allowed her to focus solely on LTMS for the final two years. The grey colour of the paper along with the folded pages to create the panels make LTMS beautiful and unique in it’s physicality as well as it’s content, “you’re really held by this vision” (Corinne Pearlman, Myriad Editions). I couldn’t agree more. This grand tome was a great undertaking which Katie described as “kind of like making a film on your own”. It completely bowled me over. When LTMS was finished, Katie moved up to the light loft space in her home to begin work on the beautifully illustrated story ‘The Crystal Mirror’. This has now been published and I cannot wait to read it! Another fascinating evening at Laydeez do Comics, thank you All!