I am artist Jacqueline Nicholls and I was the guest blogger at the February London meeting of Laydeez do comics. You can see more of my work on my website http://www.jacquelinenicholls.com/

Laydeez began that night with their awkward question which was which woman would you nominate for the Woman’s Hour power list of top 100 influential women. All sorts were suggested. Not surprising given the crowd, a lot of writers, artists and comics creators. but also fictional characters: Lucy from Peanuts, Kathleen Turner in Serial Mom. Historical figures: Cleopatra, Florence Nightingale, and woman who lived before the 20th century who had to live without the vote, modern medicine etc. And my personal favourite was “my mum. which makes sense if you met my dad.” With everyone sharing the awkwardness of public speaking, and with appetites whetted by hearing snippets of stories of inspirational women, it was time to hear the presentations…

Lora grew up in America and currently lives in Paris. She presented us with highlights of her career, how it developed from creating her own comics, part of the underground comics scene, in 1960’s US to the work she is doing today as a publishing agent.

In the 1950’s Lora read comics in magazines. She did a masters in Public Health and was introduced through a friend to underground comics, “Fabulous Furry Friends Bros” and met Gilbert Shelton. She moved to San Francisco in the 1960’s a “magnet for loonies.”

She was involved with “Facts of Life Funnies” that included in it’s first volume Gilbert Shelton, Robert Crumb, Shey Flenniken (founder of Wimmen’s Comix) and others. It sold out and artists were paid $50 a page. Lora was also involved with the development of the influential Wimmen’s Comix, contributors included Aline Komsky-Crumb, Lee Mars, Diane Nooman, Trina Robbins and Carol Tyler. Wimmen’s Comix ran for about 30 issues.

In 1984 Lora moved to Paris, where she still lives and works. Lora described the different status that comics have today in France, compared with the atmosphere of something fringe and underground of former times. The French minister for culture opened the comics festival, and it is an accepted and respected art-form in Paris. She works as an agent for comics creators, and is also involved in securing translation rights to comics. This she sees as an important aspect for the global reach of comics, and stressed that a bad translation can kill a good book. Lora compared her work as an agent to a matchmaker, trying to place the right book with the right publisher. 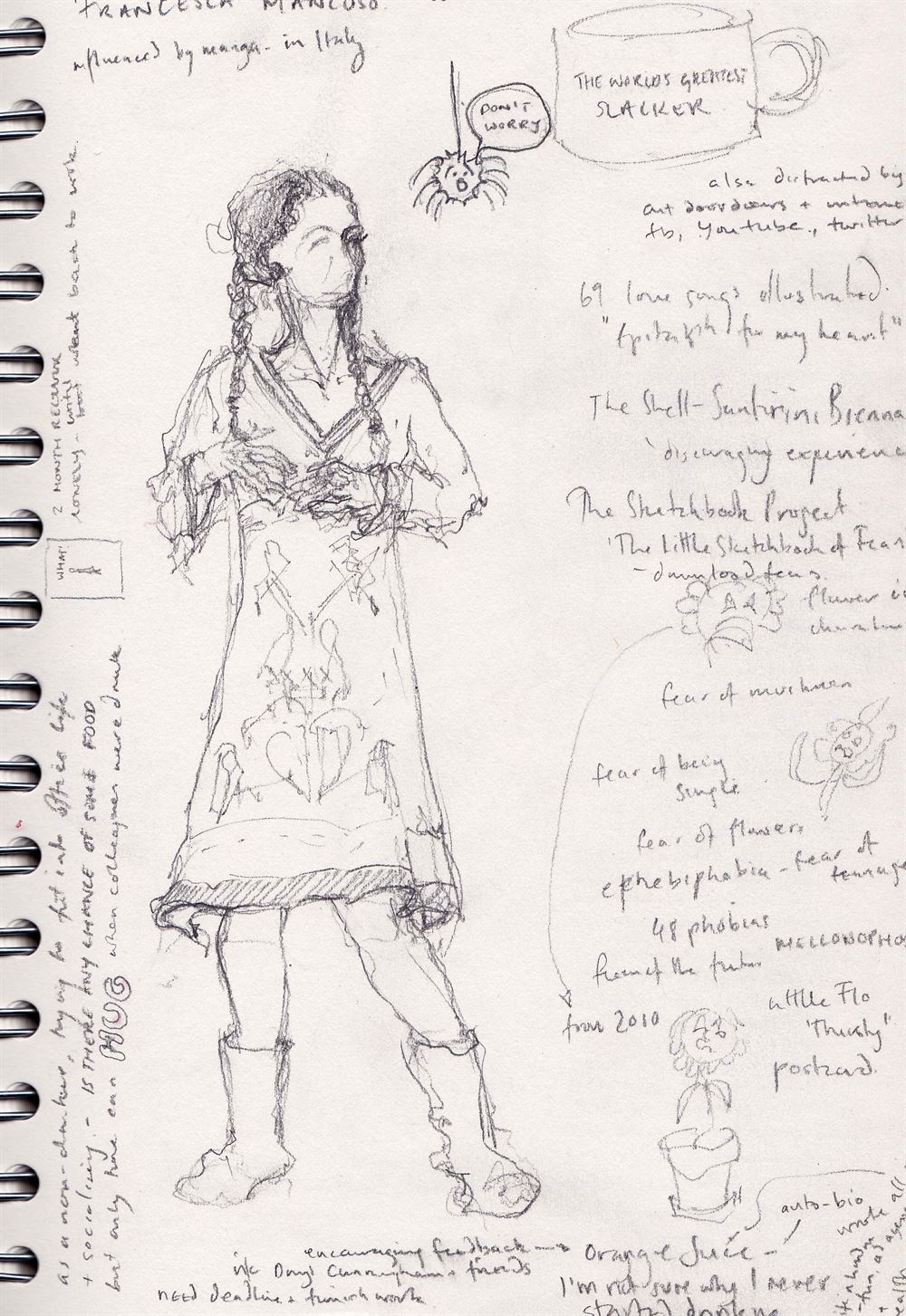 Francesca grew up in Italy where she read and was influenced by a lot of Manga comics. She describes herself as easily distracted and  ‘The World’s Greatest Slacker’ (although given my timing of sending this in I think she has quite a bit of competition for that).

As part of The Sketchbook Project, an international project that gathers sketchbooks from artists, Francesca created The Little Sketchbook of Fears. A guide to 48 different phobias as illustrated by a charming, and very expressive, pot plant called Little Flo. The fears range from fear of being single, to fear of mushrooms, fear of the future, ‘ephebiphobia’ fear of teenagers, and inconvenient for a pot plant – fear of flowers.

Francesca is currently working on a comic called ‘Orange Juice’ – loosely about her experiences being in social situations here in the UK where the pub and drinking culture play an important part in social bonding, and herself not drinking alcohol. She wrote this auto-biographical work more or less in one sitting, describing being part of a fun ad agency in London that also made her sad, with unfriendly colleagues. As a non-drinker, trying to fit in with office life and the way they socialised, the fact that they only made friendly physical contact was when they were drunk, led to feelings of alienation and loneliness. The comic has a friendly office spider that pops up every so often, and there is a sweet drawing of it with a reassuring message “don’t worry.”

Steve is a comics creator. He moved to London in 1986 ran the Cartoon Centre and has been a youth worker for 18 years. He also facilitates a comic making process for people to express themselves and communicate their reality. This is aimed at people who are marginalised, whose voices and stories are not always told from their own perspective. Steve also writes comics to educate and inform young people about various social issues. eg educating school children about state pensions and getting older. Told as a ghost story, why grandad can’t pay for things with a back to the future distopian Bladerunner future. His ‘Teenage Kicks’ for Lewisham Council was a project to provide information about issues such as drugs and pregnancy for teenagers, in a way that would be looked at rather than going in the bin. Despite being popular with the target audience this series was discontinued due to the council cutting the funding. His aim when working with teenagers is to encourage kids’ love of comics and to “graphically portray what is in their heart and mind.” Working with children, teaching basic skills and then reworking their drawings to produce something that demonstrates the children’s potential. Other projects include ‘Living’ a workshop in Wapping partnered with the charity Shelter that tells the stories of homelessness using real case studies. ‘Baby Love’ – a project for Watham Forest, working with teenage mums, describing the reality of life with a baby that was distributed to youth centres.

Steve’s more commercial work includes creating a character for the management books “Guru in a bottle” that he describes as best-selling but tedious. It seems the work that makes money is not as interesting or as vital as the work that engages with the marginalised, addresses social issues and relies on precarious public funding and charities.