A suspected murder in an Alaskan village; a house that has its history written on its walls; and a wolf with what seemed to be women’s parts. These are some of the things I saw that night.

Six o’clock had passed when I walked deep into the streets of London. I knew their meeting would happen in Charing Cross Road so I turned into Shaftesbury Avenue. Just before it started to get dark, I identified the building. Red neon letters. Foyles.

I had to understand the modus operandi of this group. I had to go unnoticed; I had to be an observer. I stubbed out the cigarette with my shoe and entered the place.

I walked between the rows of books. I saw Plato, Aristotle, ancient metaphysics scriptures, but also Rob Brydon and Steve Coogan – Where does the event take place? I asked a young man in the Maps section. I walked into the room he indicated.

The space was crowded. I occupied one of the empty chairs and took out my notebook. I was feeling – in my bones – ready for anything.

A woman in a blue cardigan walked to the front of the room. Nicola Streeten. Artist and writer, interested in the arts. She is one of the brains behind this meeting. 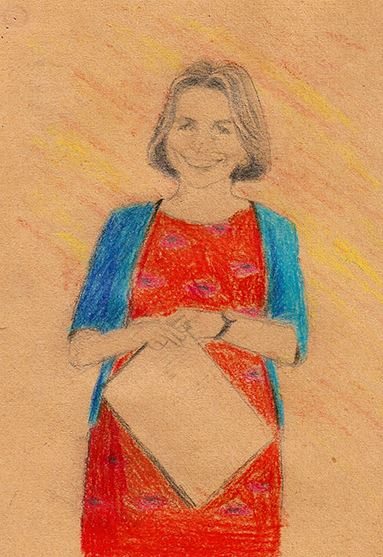 The people remained silent. She introduced the session followed by a woman in a pearl necklace. Sarah Lightman, artist and writer. She is known also for baking and bringing to the meetings what some call ‘irresistible cakes’. Accomplice and core member of this intelligentsia. 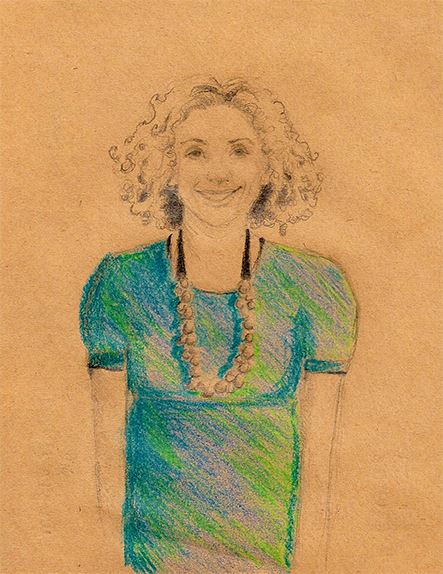 6:30 pm: Streeten and Lightman posed ​​an introductory question for everyone present in the room. My heart started to beat faster, knowing that this was one of their rituals. “What is the best or worst thing you’ve done in your life for money?” (Where to start? I covered my face with the notebook). One by one, people gave their answers. I remember two. The first, a Londoner female rabbi, said that at one time she was the official photographer of a football team, until one day the ball knocked her down. Another member of the audience — a book editor — said that the best thing he’s done for money is working as a Daily Mail subscriptions salesman. The worst thing he has done, he said, was ‘being good at it’.

7:15 pm: Two women walk to the front. They are collaborators on the graphic novel Winterland. The first one, Kathleen Bryson, filmmaker, painter, and writer. 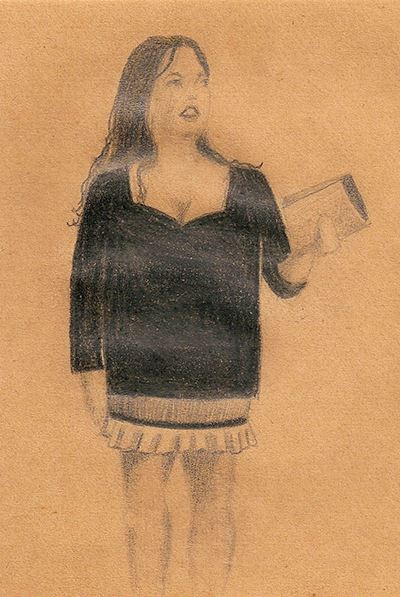 She told the audience the trigger of the plot of her graphic novel set in a small town in Alaska. “Jocelyn witnesses at age eight, the murder of a woman and she keeps quiet about it. As the story develops through the narrative, things start to become aggressively more surreal”. Simultaneously, Bryson showed a black and white movie clip of herself as a child in her snowy hometown. “In December, when I was born, the sun actually goes below the horizon… in day time”.

I couldn’t help but wonder, is this plot related to her own life? Is this story autobiographical? Does she know more than she’s letting on? I felt goosebumps on my neck.

“Two of my cousins died in a car accident when I was eight years old,” she said. “This event keeps influencing my work. Also, two children disappeared from the neighbour town when I was a girl. They were never found.”

Although she said that she has also been influenced by paganism, surrealism, and landscape, at that point I couldn’t get out of my head, as Woody Allen would put it, “I am not afraid of death; I just don’t want to be there when it happens.” 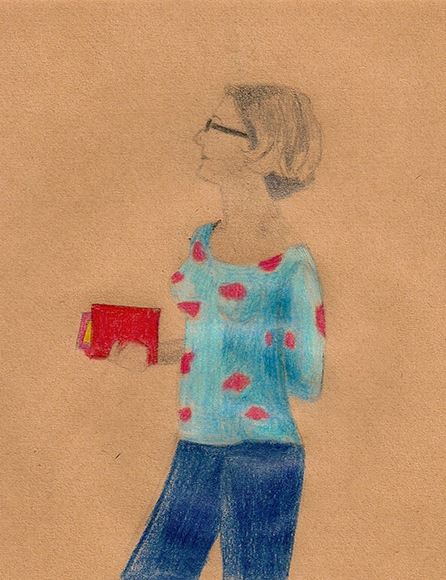 She showed the group her painting of the half-wolf, half-woman, wearing a wedding ring.  This image, she said, represents my work on the novel and also the domestication of the beast.

Cheeseman is interested in the possibilities of lights and shadows. She makes her drawings from the perspective of a filmmaker. “I was trying to imagine the lights of Alaska… the reflections of the light on the snow. Also, many of my memories are part of films.”

She has been influenced by psychedelic visual work, but also by medieval icons and calligrams, where the actual text creates a visual image.

“At the end, the novel and my dreams began to bleed into each other. When working for Winterland, I started dreaming of landscapes of snow.”

I was taking notes. I was trying to connect the dots.

7:35 pm: Streeten announced a break. People rose from their chairs. I could feel in the air that the session would soon be ending. I recognised this was a unique opportunity to understand the procedures of the group, so I stayed alert, unnoticed but alert.

7:50 pm: The last two women walked to the front of the room. Angela Wraight, painter and comic artist 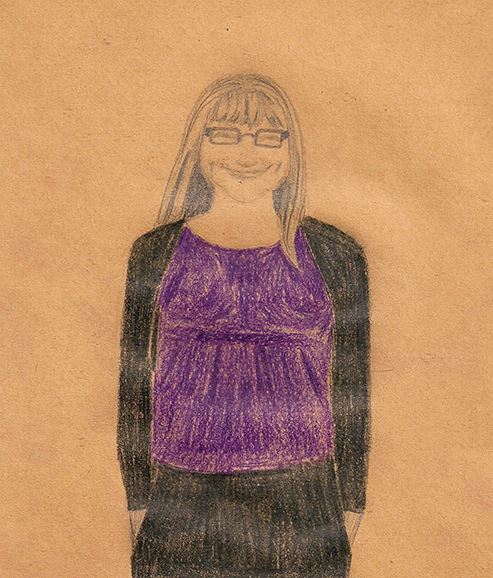 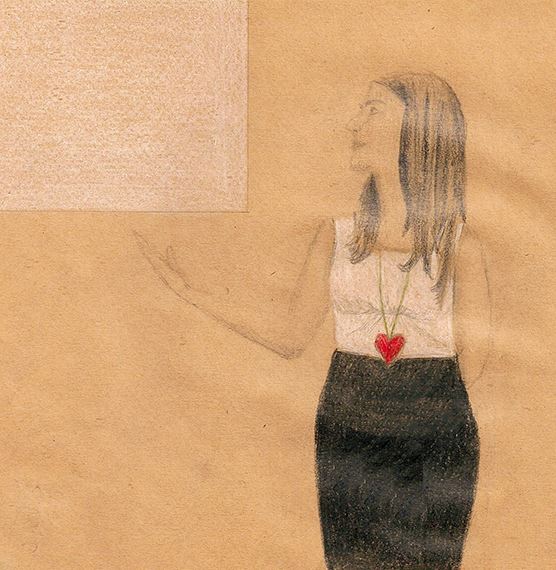 Collaborators in projects that include text and image.

I was so close to solving the puzzle.

Begum said that she enjoys being a social worker, but to hear such negative stories exposed by the media made her think that she could tell the other side of the story, through her writings. And Wraight began to illustrate those stories.

“Aha!” I thought. But this wasn’t the time for talking.

One day, Wraight started building small paper houses where drawings and text were represented. “You can raise the roof and find more intimate details about the narrative.”

These stories deal with obsessions, with anxieties, with the pursuit of understanding the world around us.

8:15 pm: I closed my notebook and put on my coat. I left the room. Once on the street, with the red neon letters behind, I pulled up the collar on my coat and lit a cigarette. I blew the smoke into the night air. “I need to make sense of this evidence,” I thought.

I coughed (and I must give up smoking). I turned and walked away.

My name is Helen Blejerman. I am a writer and artist originally from Mexico City, now based in the UK. You can find more of my work at http://helenblejerman.com or in my blog http://elastrorey.wordpress.com

Thank you to Nicola and Sarah. Thank you to the four artists that presented that day. It was an inspiring experience to see all the interesting work and a creative one to be the blogger of the month in London. 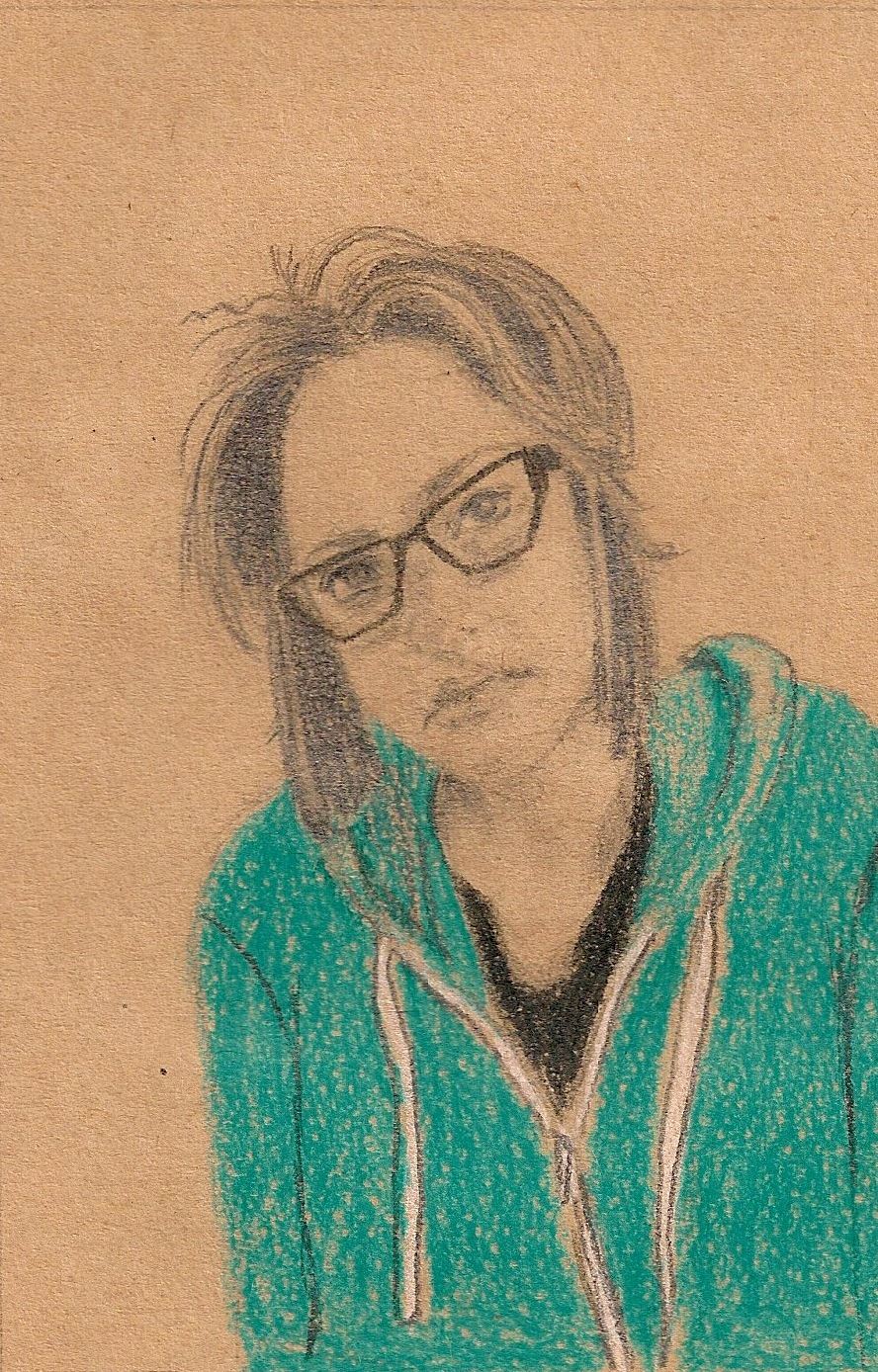 (In order of appearance)