Hello, I’m Sonja Todd, and the reason I’m guest blogging for Laydeez Do Comics is that I recently began to draw comics after years of just being a fan, and I love to hear the stories of other creators. Last spring I drafted a comic about a work trip to New York, and took Emily Haworth-Booth’s excellent course at the Prince’s Drawing School, Drawing the Graphic Novel. I’m currently doing another great graphic novel course run by Simone Lia at Number 57, and I’m keeping a comics diary.

My top tip? Diary strips come easier a day or two later when you’ve had a chance to digest everything. So long as you make some daily notes on the day’s happenings : )

One of the best bits of Laydeez Do Comics is when everyone in the audience has to answer a question. This month it was ‘What have you learnt recently?’ My favourite answers were:

Arabian Nights wasn’t written by an Arab in Arabia.

Cruella Deville is a play on ‘cruel devil’.

Men are twice as likely to be left-handed than women.

When you TP someone’s house, it doesn’t mean turning their house into a teepee.

The ravens in the Tower of London can live for up to 50 years.

The smallest screw is so small, you could fit 47,000 of them into a thimble.

To turn a wine bottle into a vase, soak some string in nail varnish remover, wrap it around the top part, then set it on fire. The top pops off really smoothly.

Please don’t try that last one at home without at least looking up more in-depth instructions on Pinterest, or achieving fully-fledged adulthood. 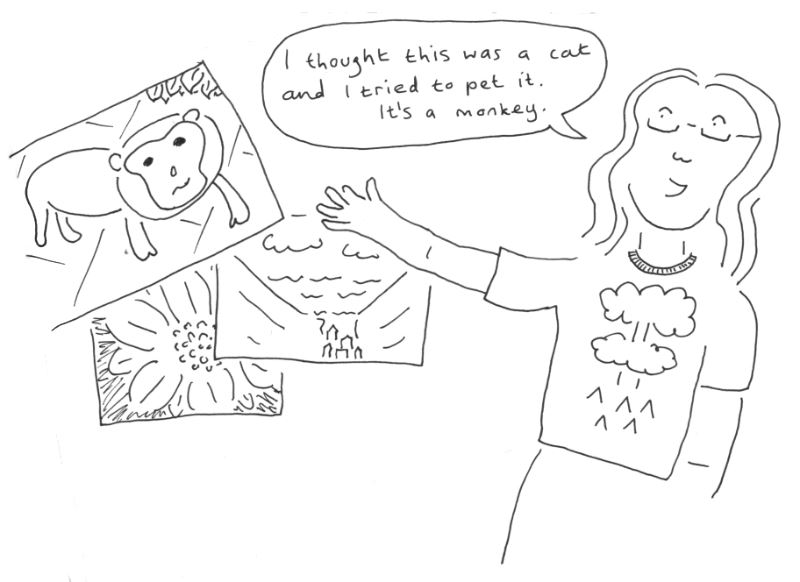 She let us flick through three tiny notebooks in which each page is illustrated by a different comics artist she met on a trip around the world: 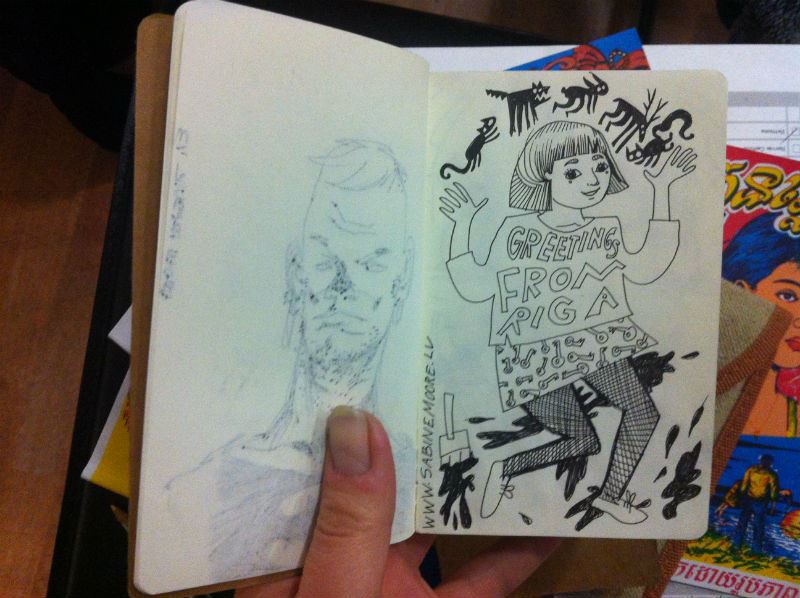 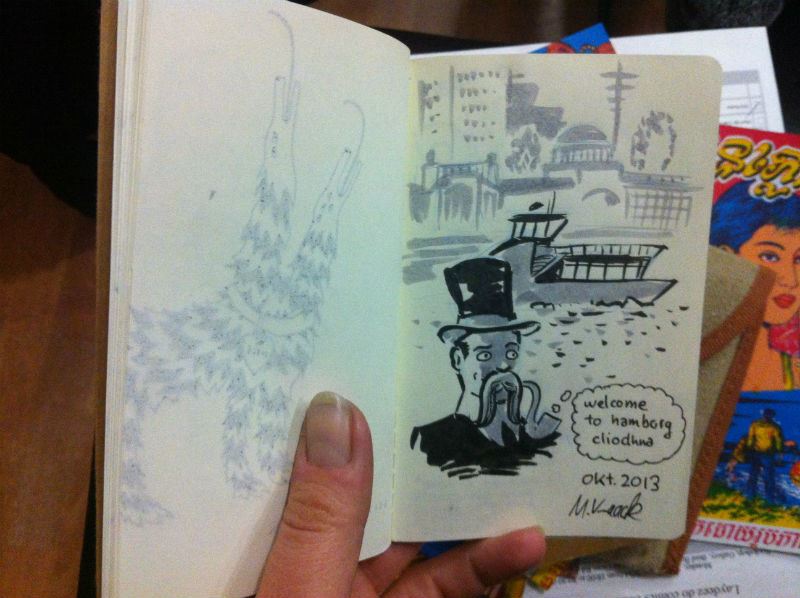 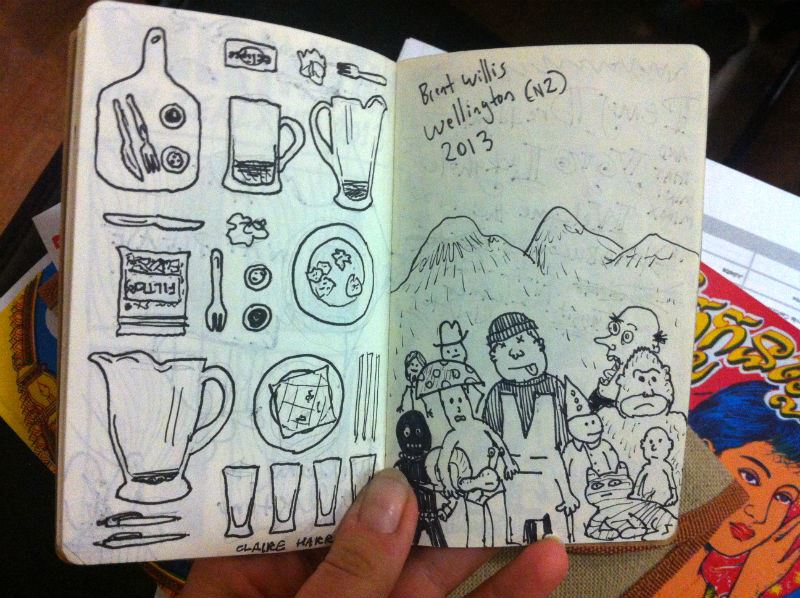 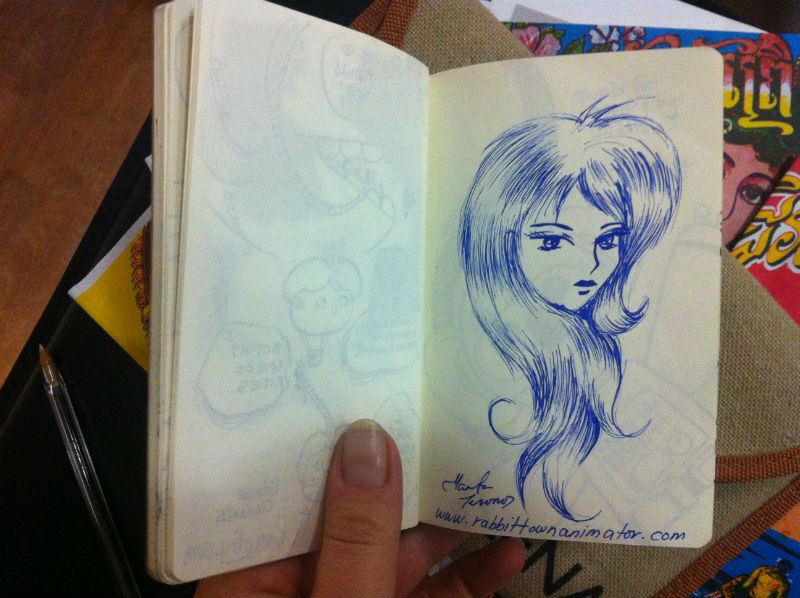 She showed us some beautiful screenprinted comics from Cambodia, where comics were often printed on the back of old bus timetables and shopping lists due to a paper shortage after the fall of the Khmer Rouge: 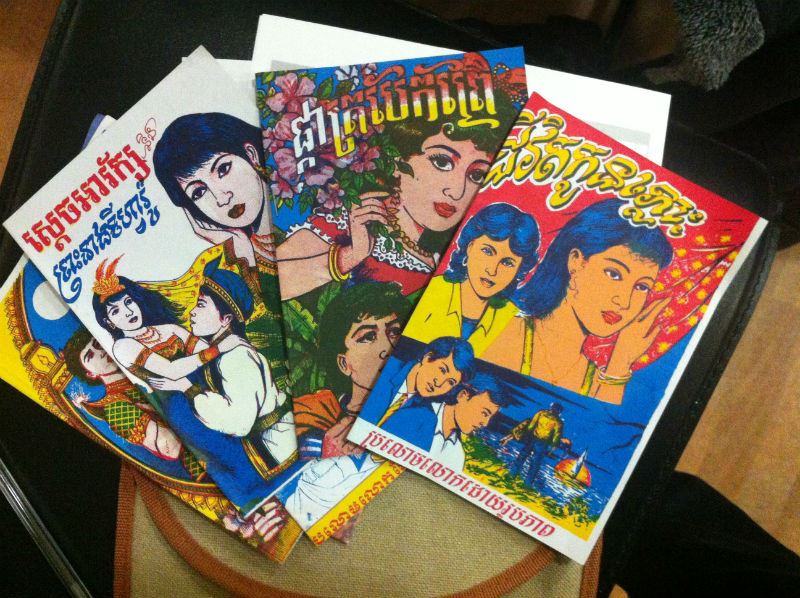 She told us about a new centre for comics in Hong Kong called the Comix Home Base which includes permanent artists’ studios on the top floor.

Her approach was to simply email comics creators ahead of her arrival asking to meet up. People responded enthusiastically, which was delightful to hear. The number of sketchbooks she filled with her own work on her trip was an impressive 8 1/2: 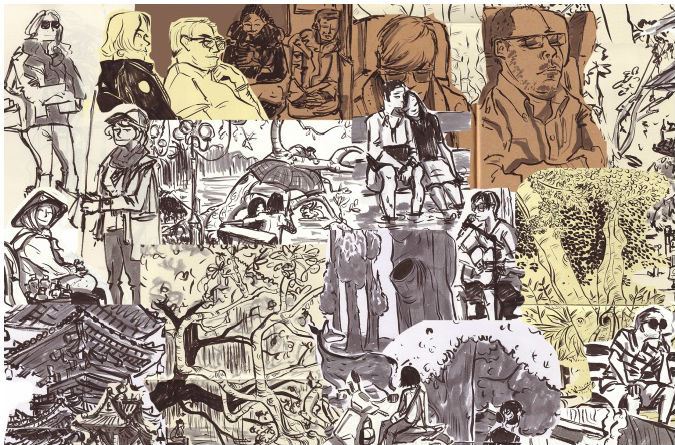 Cliodhna’s enthusiasm for travel made me want to jump on the next train to Mongolia.

A. Dee stands for the Artful Dodger, which is an apt name for a street artist who dodges around the visual world, from graffiti and airbrushing via calligraphy and Wacom pen to 3D animation and comics. He showed us how trying new forms and techniques gives you a bag of tricks to take wherever you go. Comics is still quite new to A. Dee, and he’s already mixing in photography and digital art. He described his main comics challenge as “working out visual flow”. You’re not alone, A. Dee.

He talked about masked characters being known more for their masks than what’s behind them. I love Miffed, the evil twin he created inspired by Miffy: 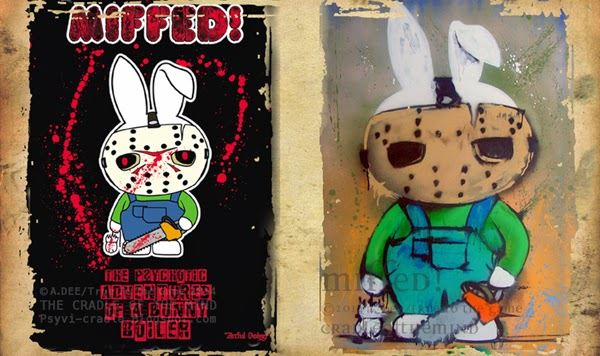 This Miffed character morphed into a masked rabbit who is the star of A. Dee’s comic-in-progress. My favourite bit was when A. Dee explained he’s given his character a painting of herself that is hung on her wall “like a mirror”. All art and stories acts as a kind of mirror so this was a neat touch. Also, look at the level of furry detailing you can get with a Wacom pen! 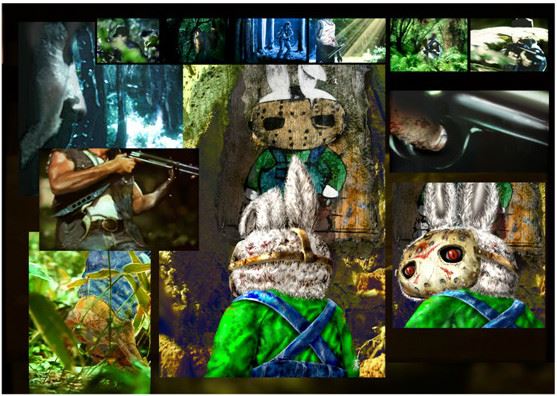 In the break I spoke to a lovely lady from the British Council’s literature division who plans to introduce more graphic novels into their programmes, which is great news. It should help more UK artists to international recognition, and give them extra sources of income. Hurrah British Council! 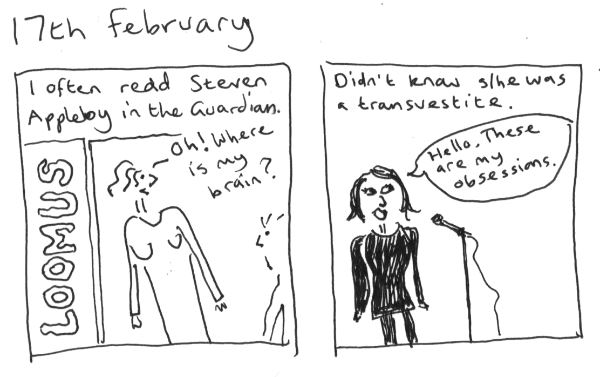 The thing I liked best tonight was the way Steven Appleby (who you’ll know from his regular Guardian strip) presented his work as Obsessions. Steven’s obsessions are secrets, things beneath the surface, thinking and thoughts, pointlessness, meaninglessness, and death. He takes all those dark angsty existential thoughts that murmur away beneath most people’s surface, and reveals them in such a lighthearted way that you don’t mind having them. His work often appears frivolous and surreal, but is actually philosophically provoking. And also really funny. 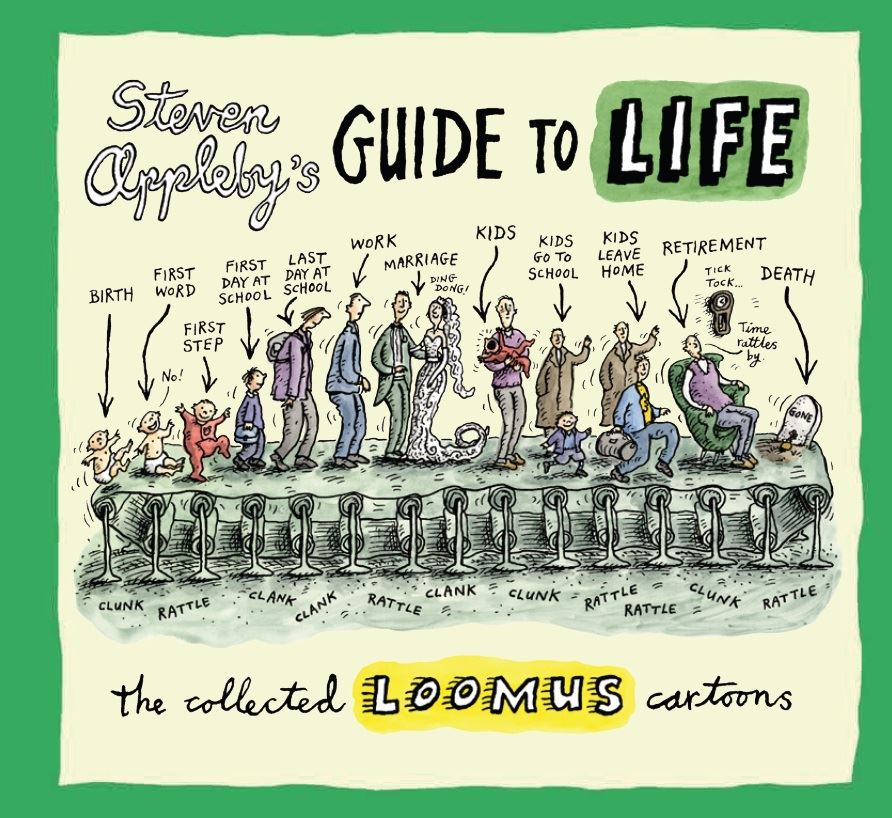 He likes “messing around with identities and the idea that nobody is quite what they show you.”

In the late 80s and early 90s, Steven made “pictures that were quite hidden”, including a whole exhibition called Icebergs about what is hidden below the surface.

There was a magical moment when he revealed some comics his mum drew in her schoolbooks in the 1930s, which Steven wasn’t aware of until fairly recently. He obviously has the comic strip gene.

Steven made me want to list my own obsessions, which I did, and it felt creatively useful. I recommend listing yours too.

I asked him the old chestnut question, ‘Do you have any advice?’

“If an idea’s brilliant, you can draw it rubbish,” he said (hurrah!) and “go with your instinct and do what you want to do. Don’t second guess. I did a book about farting because I thought it might become a bestseller. It didn’t.”

Steven’s output is impressive – roughly a book a year for the last 18 years. His work has been turned into a stage show, a radio series (“I wasn’t a good enough actor to play myself!”) and an animation.

He said his books sell only just enough to warrant doing the next book, which may have been part-joke, part-truth, but we should all buy more Appleby to ensure a steady supply. 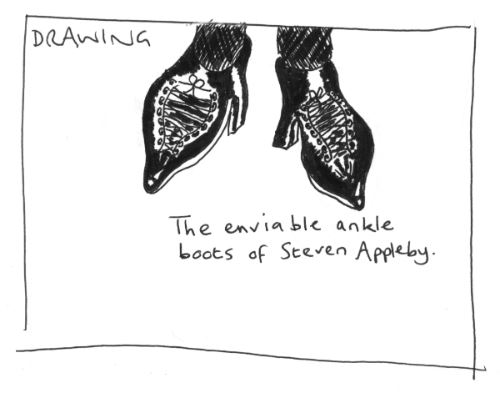 From the whole audience, I’d like to say a huge congratulations to Sarah Lightman, one of the Laydeez organisers, on the birth of her first baby six weeks ago – we missed you Sarah! Thank you to Nasrin for stepping in on baking duties. See you next month everybody!