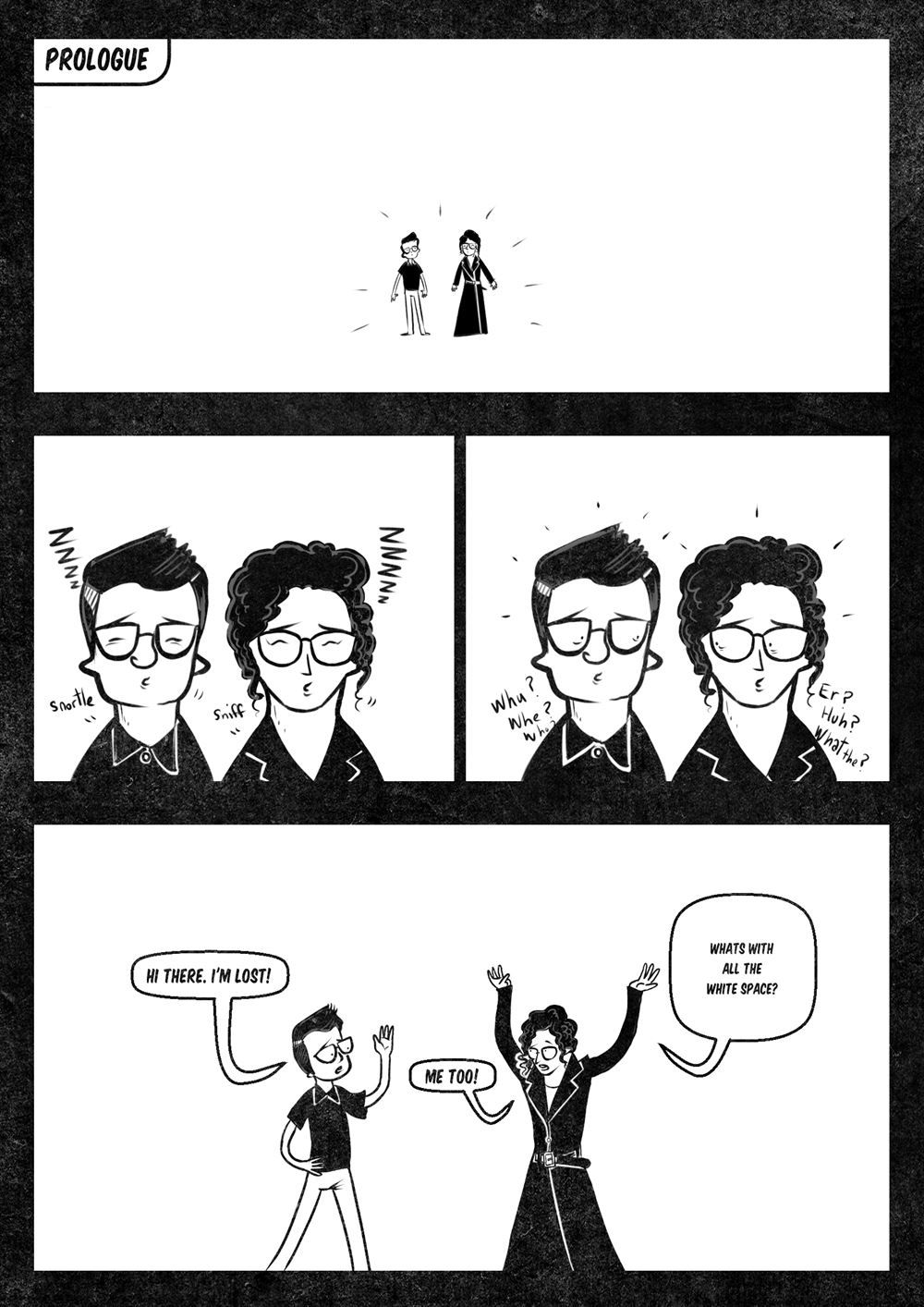 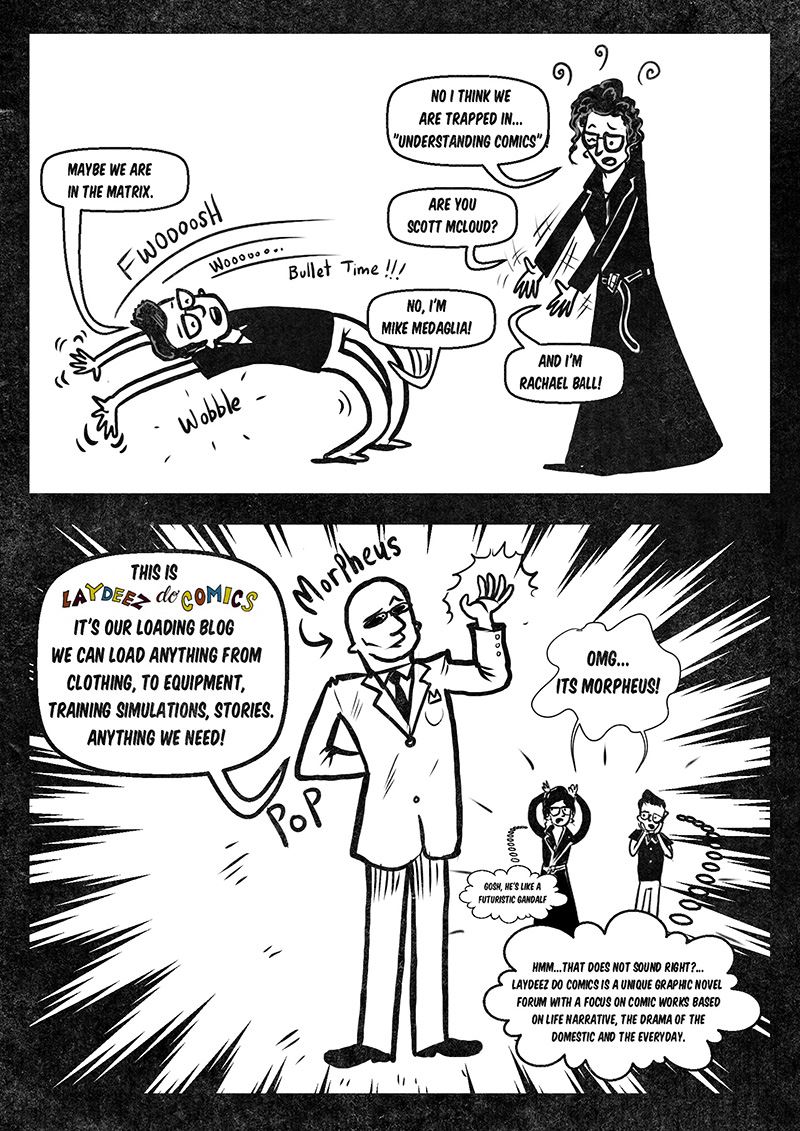 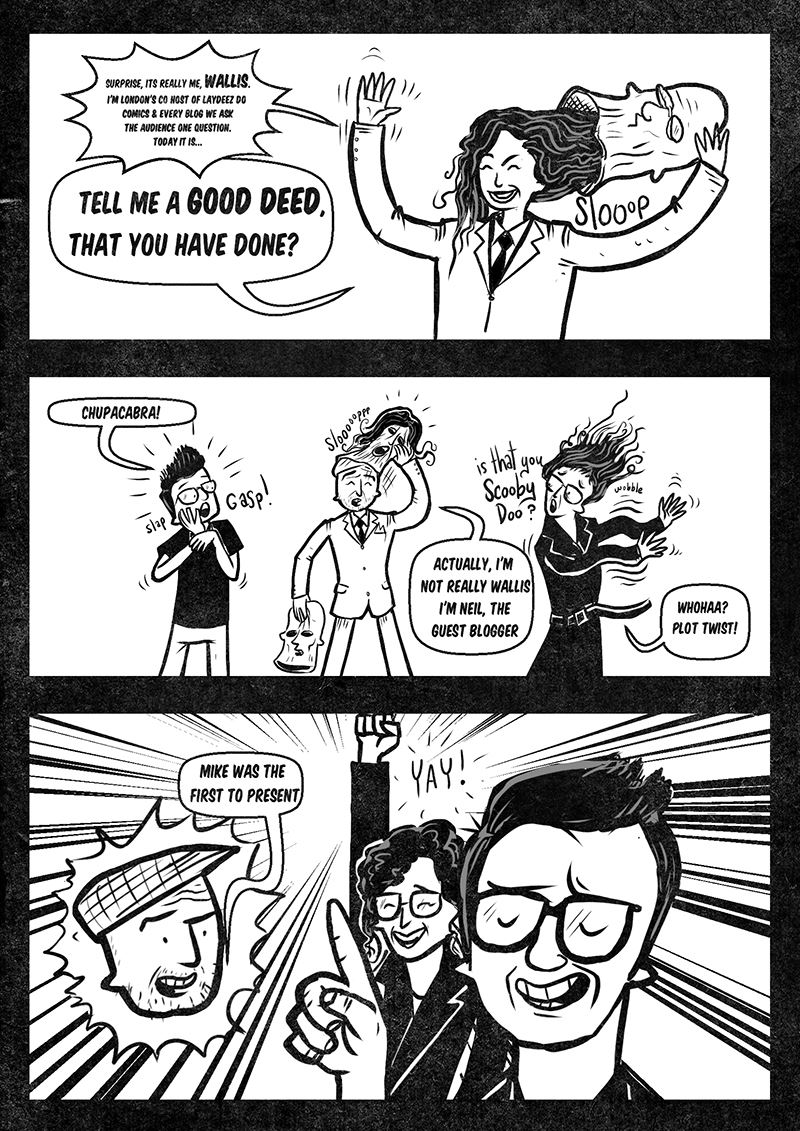 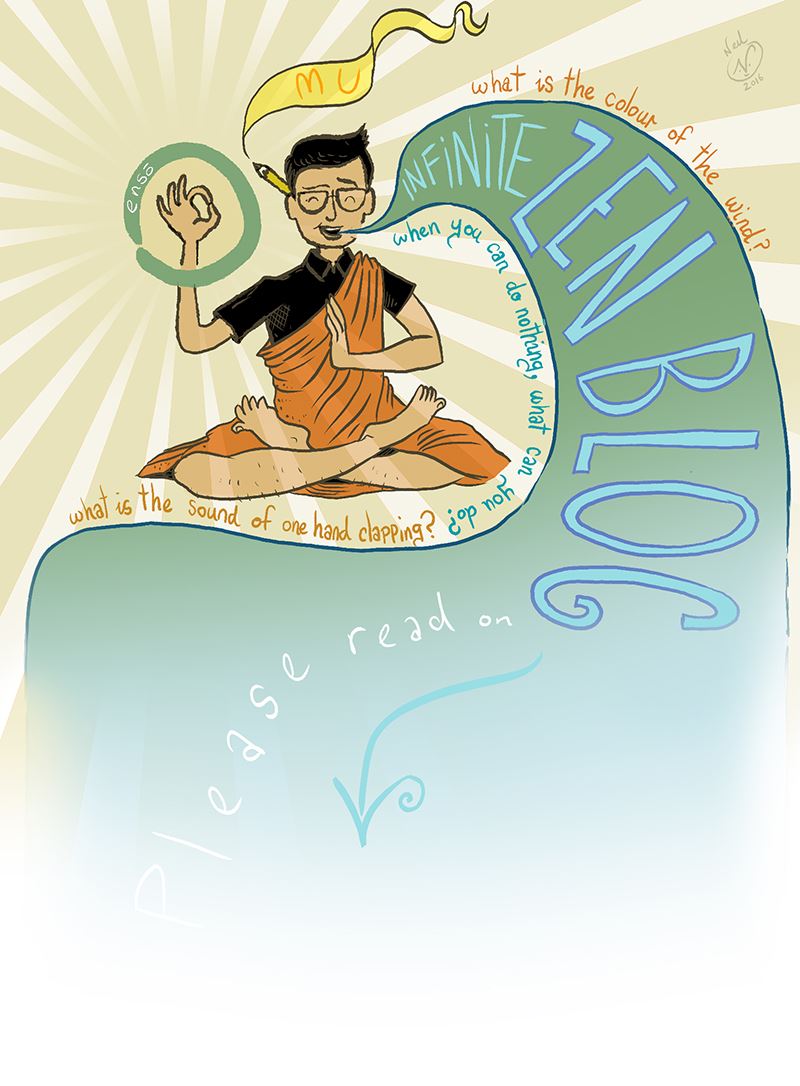 I arrived in a complete Mcflurry which betrayed my attempts to melt into a spare seat near the front of a packed room full of shelves, people and comics. This was a trinity of firsts for me; I had never been to a “Laydeez Do Comics” meeting, this is my first time guest-blogging and, in fact, blogging in general. As usual, no pressure.

Wallis Eates, London’s co-host with Keara Stewart was facilitating the proceedings with a customary warm up. This was in the form of an open invitation, “Tell me a good deed you have done”. The invitation to divulge was a counter point to the previous session’s, “Tell me a bad deed you have done”. Apparently only Wallis had done a bad deed that week, but that’s a different story for a different guest blogger. Everyone had a chance to respond with good deeds zipping round the room. When we were done, I told myself that I really aught to do more good deeding.

Now warmed up and focused, we were ready for the first guest speaker, Mike Medaglia. A calm man with a fine Italian name, not too dissimilar from the creator of Hellboy (my favourite comic). He looked every bit the cool Canadian boutique comic artist: slick, cropped short dark hair with a scooping bit at the front – I tried not to display my quiff envy. As you will see, he has been very busy and quite prolific.

Mike’s gentle and warm manner set the scene. He had spoken at LDC 4 years prior and was no stranger to Gosh! Comics, a place where he ran a reading group, worked, and met friends – even his agent and publisher. Gosh! was the real beginning of his journey.

Mike gave us an overview of what he had been up to since. And went on to present his earlier works which included:

“Wet Ashes” his first crack at making a graphic novel; “Wu Wei”, his first attempt at blending spirituality with the comic medium; an anthology that was web based; “Seasons” which are stories about the seasons in the year and how they relate to the seasons in a life; “Wu Wei 2” a spirituality anthology of different artists and an opportunity to editorialise; “Last Days” a story about the last sad days of Vincent Van Gogh; “Blue Bottle Mystery”, a comic book he adapted with the wonderful Artist Rachael Smith, based on the novel by Kathy Hoopman; and comic strips for Huffington Post. These deal with a Zen Buddhist koan (story, statement, question or dialogue to provoke introspection in the reader). Mike refered to them as infinite canvas comics.

It is clear that Mike’s interest in spirituality and Buddhist philosophy is a driving tour de force behind his creativity. His current book, “One Year Wiser”, is his biggest novel to date. The premise is that there is an illustrated quote for every day of the year. The concept is strong, matched by the execution. The ink lines are well balanced. He draws satisfying compositions which are part pattern, part surreal, part metaphor but all good. The colours on each page work together like a team of shaolin monks. wisdom wafts out of each page, facilitating introspection, reflection and a sense of well being.

Mike also works 2 days a week as an editor at Jessica Kingsley Publishers developing a line of comic books based on themes of aspergers, autism, trauma, sexual abuse, arts therapies and other such health issues. This is an area where I see comics performing a much needed social service.

Mike is currently working on the sequel to Blue Bottle Mystery, called “Lisa and the Lace Maker” about a young girl with aspergers. 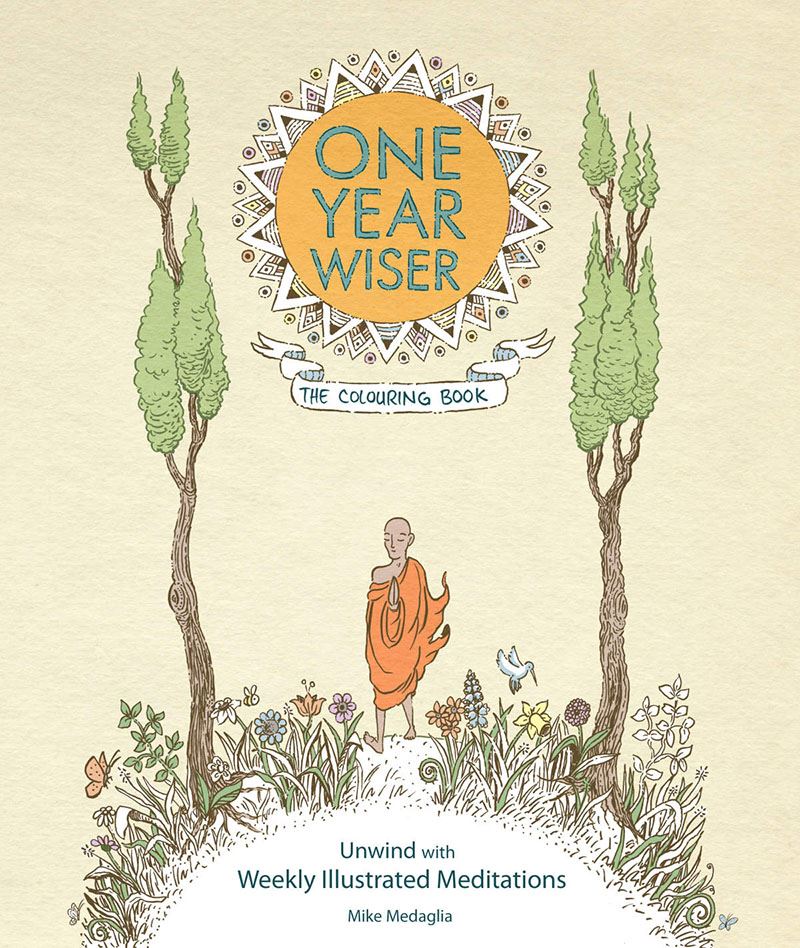 For more information on Mike and his comics visit http://mikemedaglia.com/

From the enlightened spiritual to the engaging personal…
Rachael Ball was our next guest speaker at once grounding us in her captivating talk. Matching Mike in noir attire and glasses framing her curly dark locks, she traversed the boundaries between cool and elegant, rocking it like a boss. We were in the presence of a formidable force. Her manner appeared to me to be honest and eloquent. You could anticipate that she was going to emotionally move all of us in that intimate comic space.

Rachael worked in cartoons 20 years ago, working for a comic called “Deadline” for 4 years, she went on to do an illustration MA at St Martin’s School of Art, then becoming a full time teacher.
After being diagnosed with breast cancer 4 years ago she decided to make some massive changes in her life. 7 months after her treatment she felt able enough to begin making her recent experience into a comic of some sort. Initially 13 blog episodes became a 17 chapter graphic novel called, “The Inflatable Woman”.

Her characters in the book range from ones that are supportive, comical or they freak out the book’s protagonist Iris. Some were fictional whilst others were based on real people. Rachael introduced us to them:

Iris a zoo keeper who is diagnosed with breast cancer while she develops a supportive online relationship with a lighthouse keeper, creating two kinds of tensions that run throughout the book. Part of Rachael’s inspiration for the book came from her experiences through internet dating.
Maud representing Rachael’s best friends Sally and Lucy who were supportive through her treatments.
Cat a funny cat character who does the household chores.
Penguins at the zoo, they are part of her zoo, they behave like kids at school.
A surgeon called Dr Vida, a very compassionate doctor.
Nurse Bobby, a thick skinned nurse who gradually becomes more evil, representing the paranoia felt when going through the cancer treatments.
Dr Magic based on Rachael’s surgeon, a showman.
Grandma Sugs, a character who says things in the wrong moment.
Mr and Mrs Death, foreboding characters based on two strange staring tube passengers who Rachael kept bumping into on three separate occasions after her diagnosis.
Sailor Buoy is Iris’ internet date and love interest.

Rachael then talked about some of the visual metaphors in the book using moths, paper dolls, a poem about a sick child, dark trees with tumours (which later blossom), and rounded off the talk by explaining some of her process.

She did not spend a lot of time thinking about the plot but made lot of long lists of things that she could remember over each month. Rachael spent a lot of time coming up with characters.
Rachael is a skilful renderer. The drawing style is pencilly with its heavy shading and textured areas balanced with sparing lines and white paper. All used to good effect in all the right places. The charcoal black pages are not overcrowded having 1 or sometimes 2 per page . Allowing for a well paced story. A true page turner. Poetry pops up every now and then adding to the atmosphere and feeling. The dark aspects of the book are masterfully blended with humour and dreamy sequences.

Rachael’s current book is called “Wolf Man” which is about a family whose father dies and how they cope with the loss. 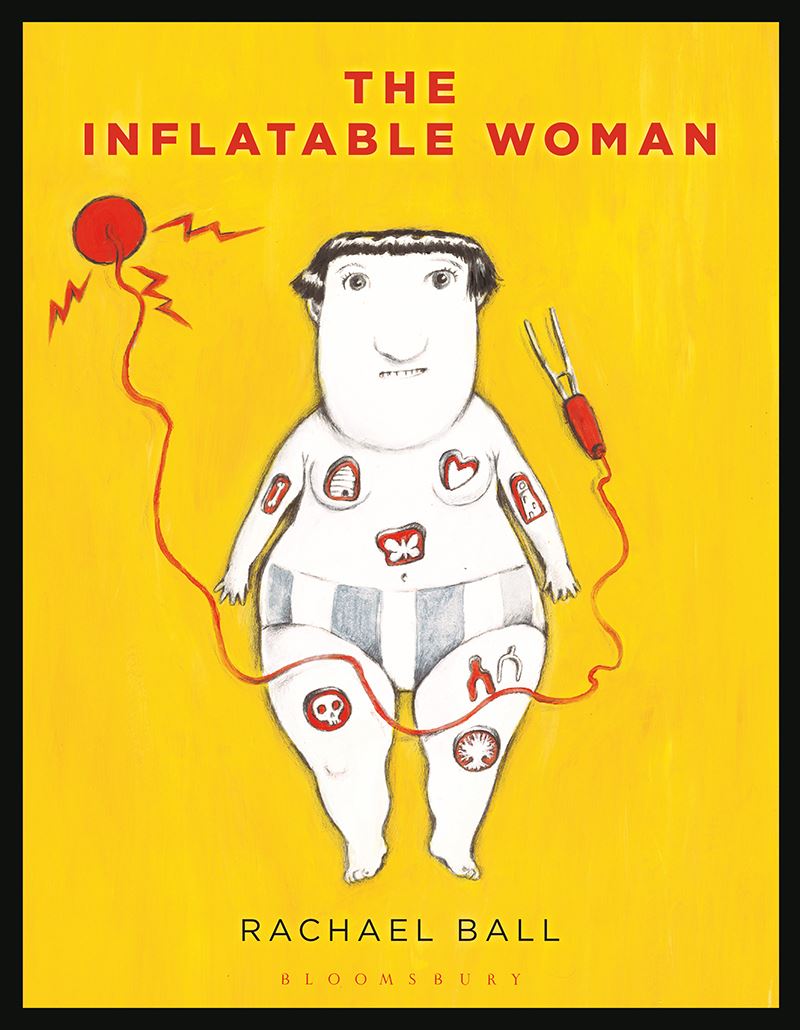 For more information on Rachael and her comics visit http://rachaelball.tumblr.com/

After a nice round of questions from the audience, I simply could not help myself. I picked up copies of both books from Mike and Rachael. I was, after all, in the best comic shop in town. 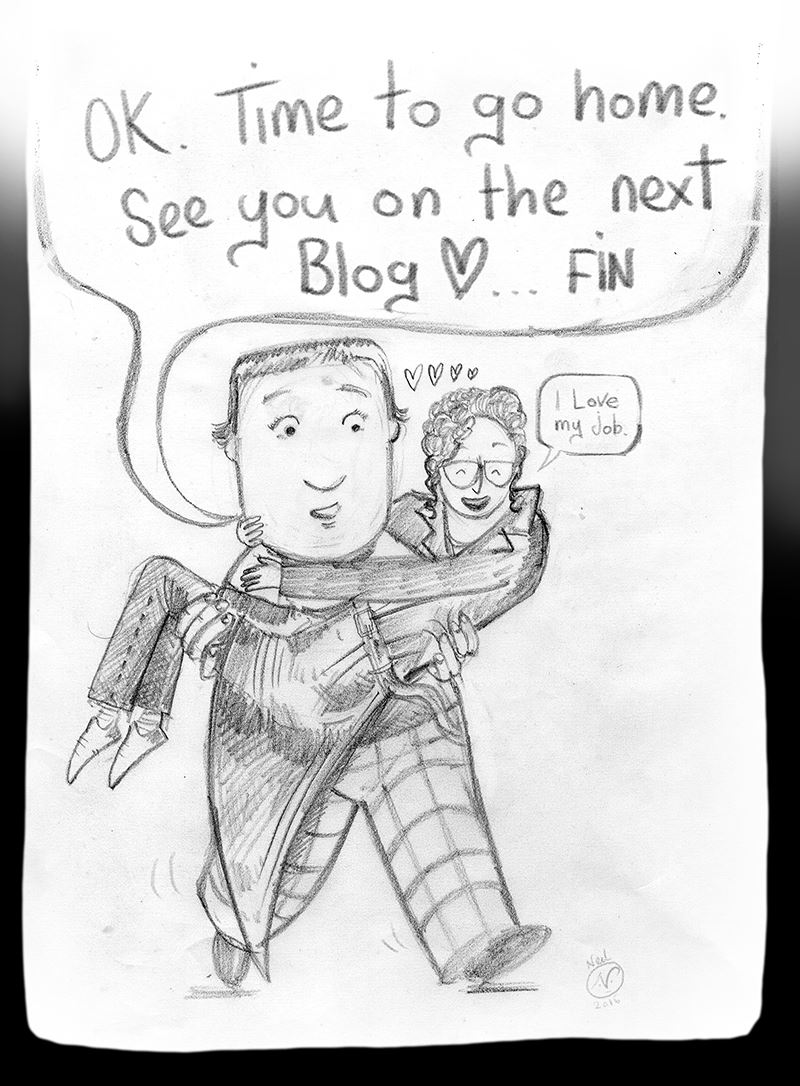 This blog was created by Neil Emmanuel.

You can see more of Neil’s work at neilemmanuel.com and you can buy his book here: Hunting for History: Saxon Gold.