Hi, I’m Fiona Marchbank and I work as a freelance Illustrator and Designer and do comics projects for fun on the side. I was asked to guest blog at the Laydeez do Comics Leeds in November. I will say in advance, I’ve had a bit of time left alone with the sketches I did on the night before I’ve had to make this post, and might have gone a little bit overboard with the drawings. I regret nothing!

Thanks to Thought Bubble Comic Convention attracting artists (and attendees) from far and wide Laydeez was able to snag some artists who wouldn’t normally be able to make it up to Leeds but were here for the convention. The speakers were Gemma Correll, Paula Knight and Ian Williams.

First thing on the agenda was to wish Laydeez do Comics Leeds a happy 1st Birthday. 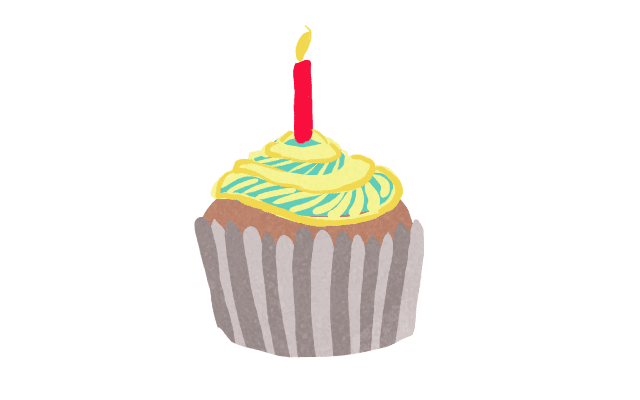 Unfortunately there was no cake, but there was soup on offer from the venue, Wharf Chambers, and that’s almost as good as cake.

Gemma was a requested guest through the suggestions forms, so it really can work to suggest artists you’d love to see speak at a Laydeez Event.

Due to needing to catch an early train home, Gemma Correll was our first speaker, before the usual introductory questions. She opened with photographs of her two adorable pugs.

Though professing to not be very good at giving presentations Gemma was very engaging, enlightening us with a large range of work from professional and personal comics to illustration work.

Refreshingly, Gemma’s illustrations also make use of comic styling, a light, graphic approach and integrated text and image. Though she claims they’re not ‘real illustration’ but she gets paid for them anyway.

Gemma’s work revels in it’s spontaneity. She doesn’t sketch her work first, rather draws the final cartoons straight on paper, as her work needs that freshness that can be lost in excessive planning, sketching and inking.

Gemma’s pugs play a large role in her comic work, where she has illustrated and made books about her pugs, and made little cartoons about their inner thoughts. Her book “A Pugs Guide to Ettiquette” is entirely from the point of view of her dog. Gemma also makes cat comics for Emirates Airline magazine.

Gemma likes to put in comic diary format things going on in her life. She talked about how she was useless at sport, yet was currently trying to do more and showed us examples of her diary work about sport.

As a previous fan of Gemma’s animal work it was great to be able to see a more diverse range of her work, and be able to talk to her before the meeting as she had to dash off fairly quickly after her talk was over to catch her train. It was fab that she made the effort to stay the extra time after the convention to speak to Laydeez do Comics.

After Gemma’s talk we then had the introductory questions, which this time was about characters or people to add (or remove) from the Comics Hall of Fame.

It was suggested that the balloon boob comic ladies of superhero infamy needed out of the hall of fame, and that Garfield, Tintin, Marjane Satrapi, Charlie Brown and the gang, Calvin and Hobbs, Jean Grey, Death from Sandman and Superman amoung others should be allowed in.

The second speaker was Paula Knight, from the Bristol Laydeez do Comics. Paula was talking about her work on a graphic memoir, and her first slide was a scene from a motorway, chosen because it had “Leeds” written on a sign in the background.

Paula’s work deals a lot with what it means to be female, as well as adressing some tough issues such as pregnancy and Miscarriage.

Paula’s memoir (or the pages that were shown to us) really makes use of the illustrative nature of comics, sometimes needing to use no words at all to describe the storyline or feelings of the author. The illustrations are sometimes very detailed and sometimes very stark, using the right amount of detail to give impact to what she’s talking about at that time.

While her topic was often sombre and heartfelt, Paula was very engaging and remarked that “It wouldn’t be Laydeez do Comics if I didn’t mention Vaginas”

Paula’s memoir is due out in 2015, published by Myriad Editions. While we were shown a lot of work in process slides, I am looking forward to seeing the finished product.

Ian Williams is a comic book artist, physician and writer. He was presenting a talk about his approach to using comics within the medical profession to help doctors come to terms with the everyday realities of their job.

He presented us parts of his soon to be published book, The Bad Doctor. It is a fictional story about a rural GP but contains some autobiographical elements with Ian’s history in medicine. Previously Ian has published comics under a pseudonym, Thom Ferrier,  to avoid patients recognising themselves in his work.

He also talked about his own struggles withing the medical industry and how comics have been his outlet for his thoughts about being a doctor.

It was fascinating to hear Ian speak, especially as I come from a purely art background, and Ian approaches comics from a completely different perspective. His book, The Bad Doctor,  is yet another that I will be looking forward to getting my hands on.

Unfortunately I was unable to stay for drinks and a chat after the event as I had also spent the previous few days in a comics haze, first at the Comics Forum and then at Thought Bubble, and I was ready to pass out, but once again all the speakers were diverse and interesting and a good night was had, hopefully by all.

And here are some of the original sketches before I went a little nuts on them.

I did my live drawing upon my recently acquired iPad, thanks to a wonderful piece of software by adobe, because as a predominantly digital artist I’m more comfortable with the ability to use colour and all that jazz, but mostly because I just got an iPad and I’m a gadget fan so I’m going to use this thing if it kills me.
My other work can be found on my portfolio. http://fionacreates.net