Hello! My name is Becky Kidner. This is my second time blogging for LDC Leeds (first was for the 30th September 2013 meeting, which you can see here). Tonight it was an impromptu volunteering job from me since there wasn’t a designated blogger for the evening! To see more of my work, please visit my website. 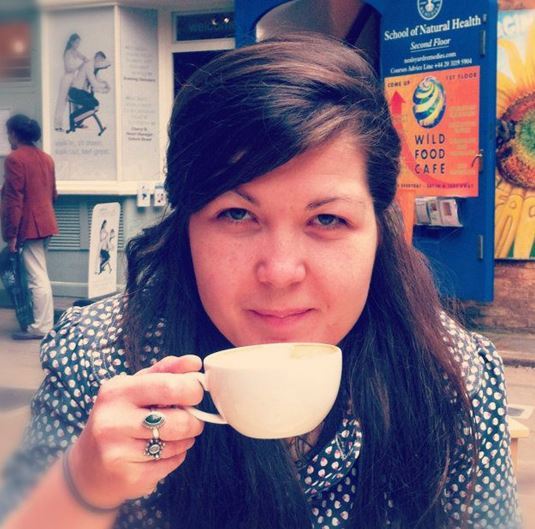 As I mentioned in my last blog post, I gave a talk at LDC Leeds in May 2013 and really enjoyed it. I love Laydeez Do Comics and really enjoy attending the groups. I have missed the last two for one reason and another so was super pleased to be back and listening to interesting and inspiring people talk about their work!

I made a little zine from the evening, only because I had forgotten my notebook and needed something to make notes on! 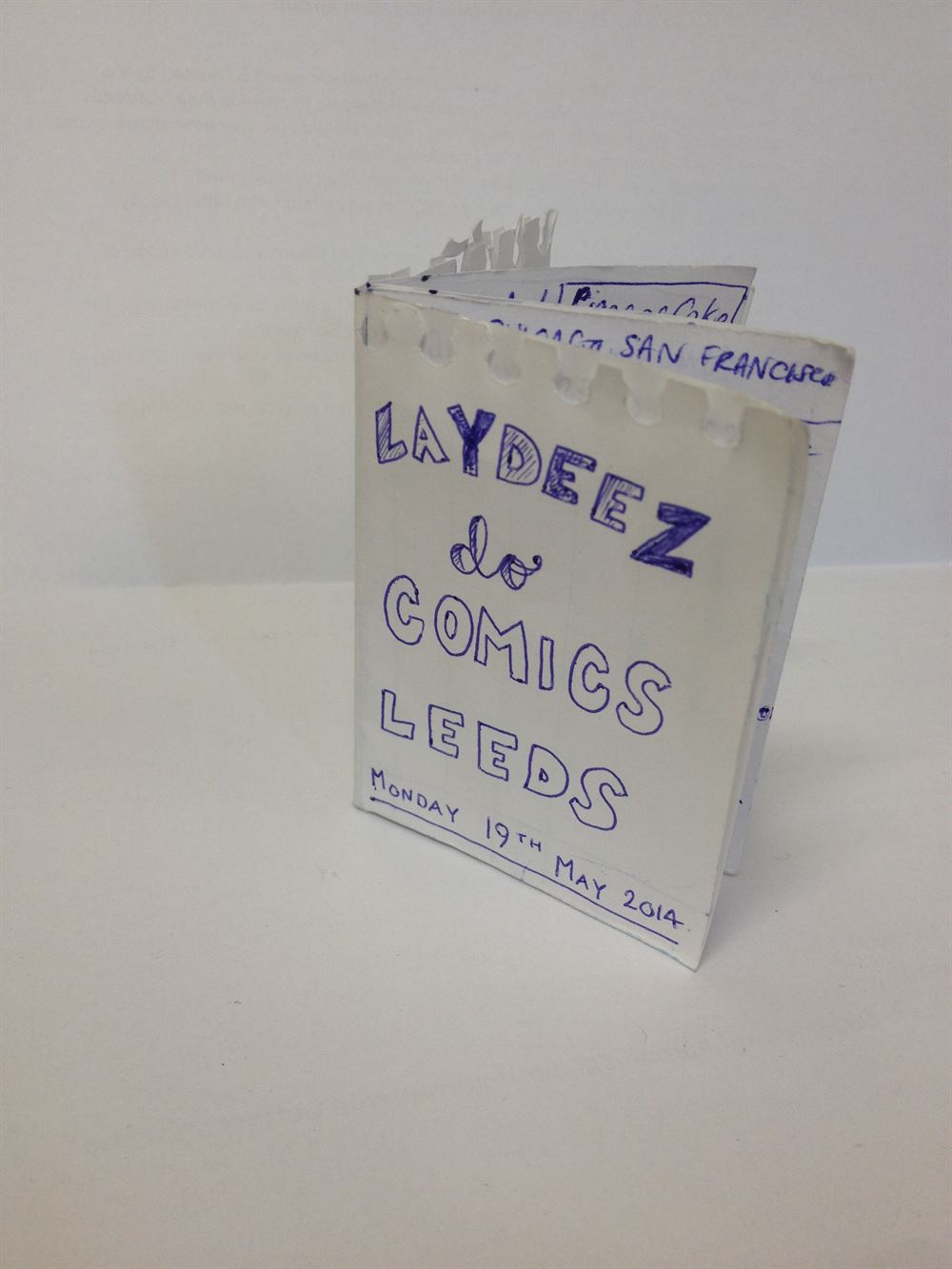 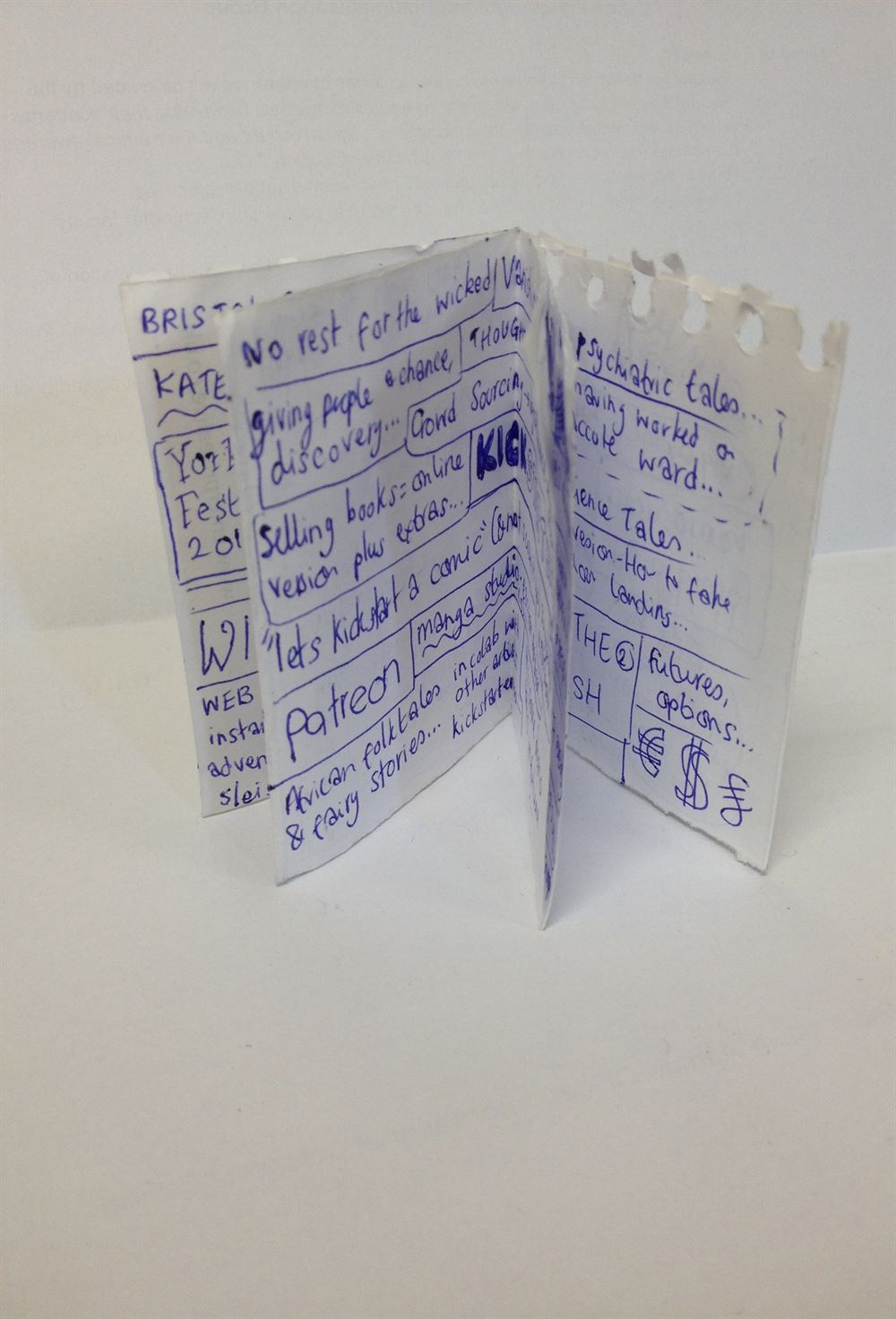 The meeting started very promptly at 6.30pm, at the always lovely Wharf Chambers (such a cool little place).

This meeting we had a choice of two questions: ‘What’s your Favourite Colour?’ or ‘What was the last thing you drew?’ We had the following answers: Blue… Orange… Red… A Roulette Wheel… Green… Blue… Red… Purple… Red… Blue… Blue (as in nature blue, not political blue) … Yellow… Purple… Pink… friends face in chemistry… an underwater scene… a racoon peeking from behind a fence… 90 photo fits of Peter Sutcliffe… green… a 99 ice cream with a tentacle instead of a flake… girlfriends birthday card. 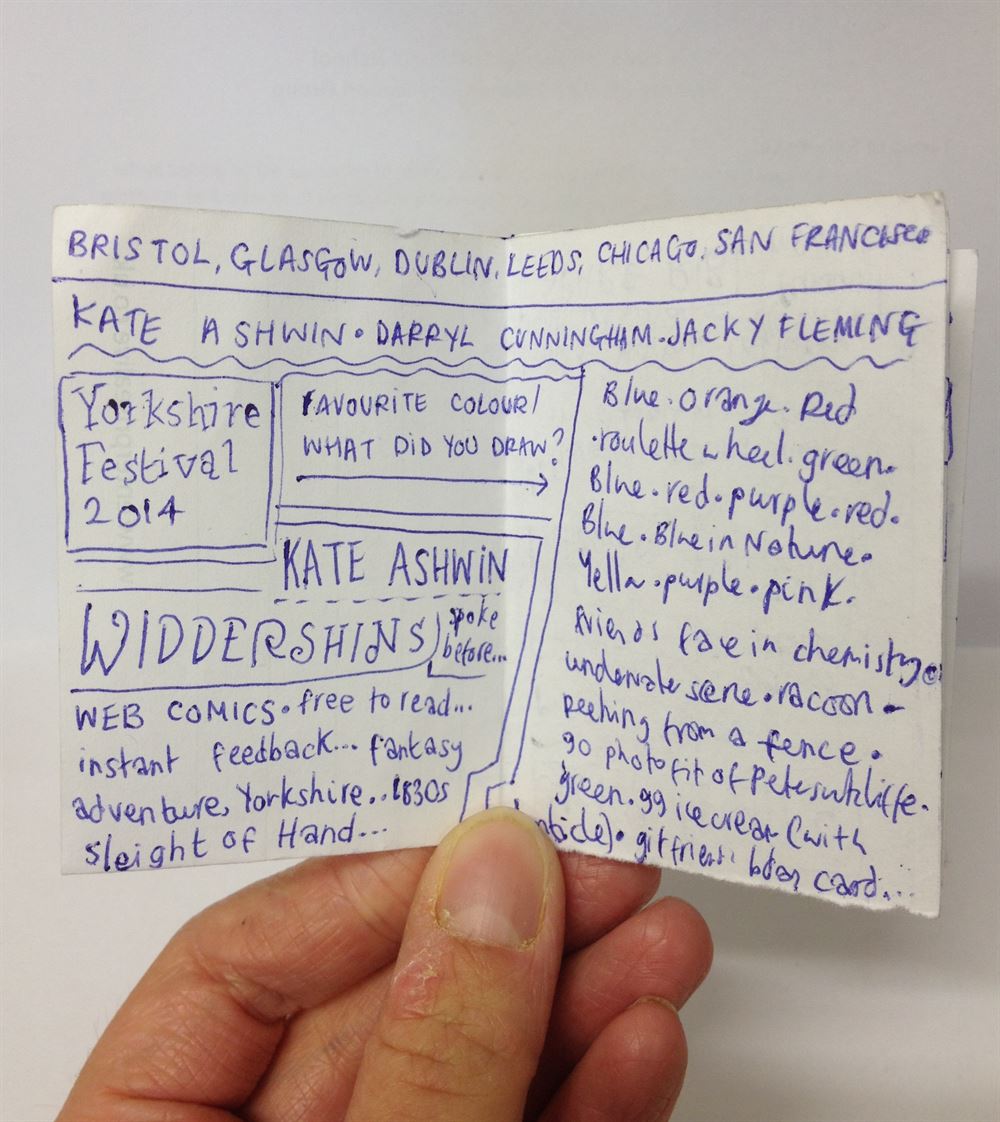 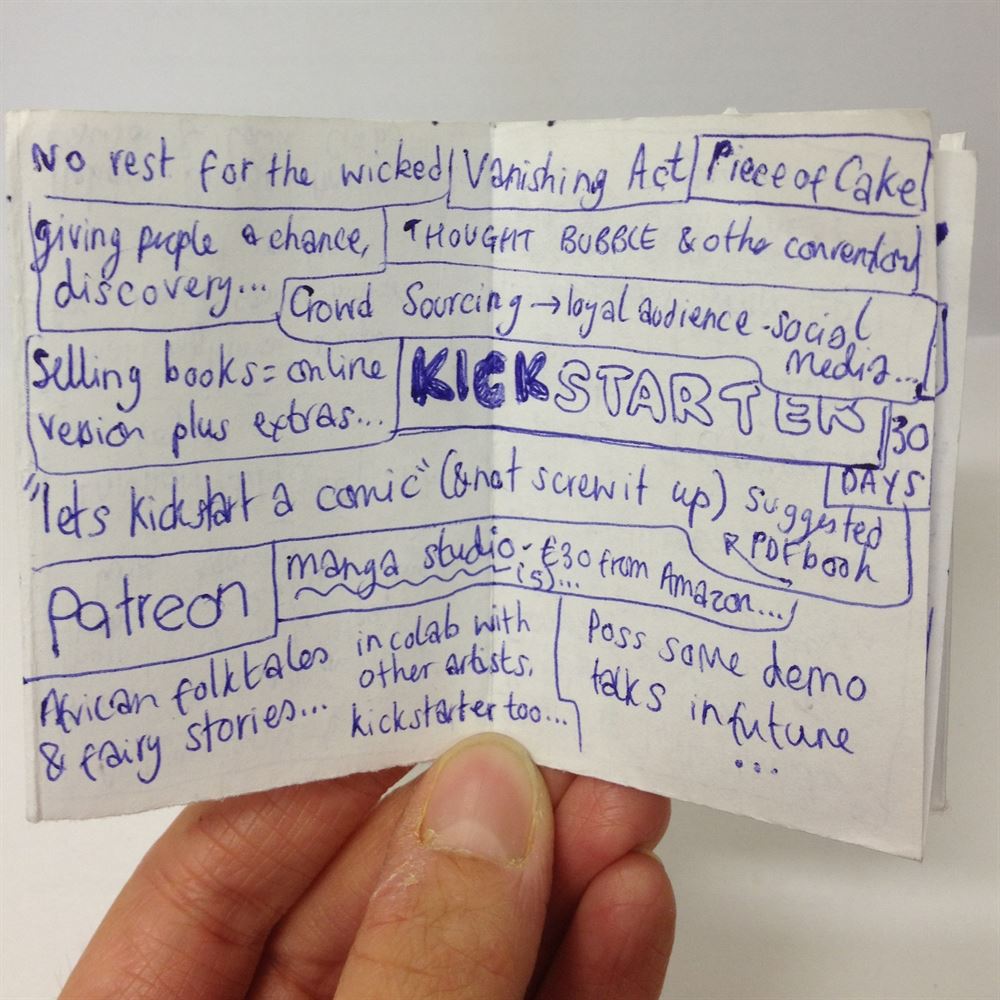 I heard Kate talk at my very first LDC meeting in January 2013. Kate has an online web comic ‘Widdershins’ which is a fantasy adventure comic set in 1830s Britain. Widdershins proved to be really popular and gained a loyal following, which allowed Kate to use Kickstarter to fund two printed books: ‘No Rest for the Wicked’ and ‘Vanishing Act’. You can see Kate’s Kickstarter profile here.

Kate has since gone onto crowd source funding for other projects, including a book in collaboration with other artists “Cautionary Fables and Fairy Tales: Africa Edition” which you can see here.

Kate suggested a good PDF downloadable book for anyone looking to crowd fund a project in this way: “Lets Kickstart a Comic (& not screw it up)”. Kate also suggested another site for crowd funding: Patreon.

A discussion was had about the methods Kate uses to draw her comics. It turns out she uses a tool called Manga Studio, which you can pick up for around £20-30 on Amazon.  The fact that it’s called ‘Manga’ studio shouldn’t put anyone off, as any style of comics drawing can be done using this software. It’s easy to create frames and speech bubbles and Kate says it has saved her countless hours previously spent on Photoshop amending ellipses!

It was suggested that for a future LDC meeting a demo of this and other tools/software people use to make their comics could be had – people seemed keen on this idea, so watch this space for a demo meeting in the future! 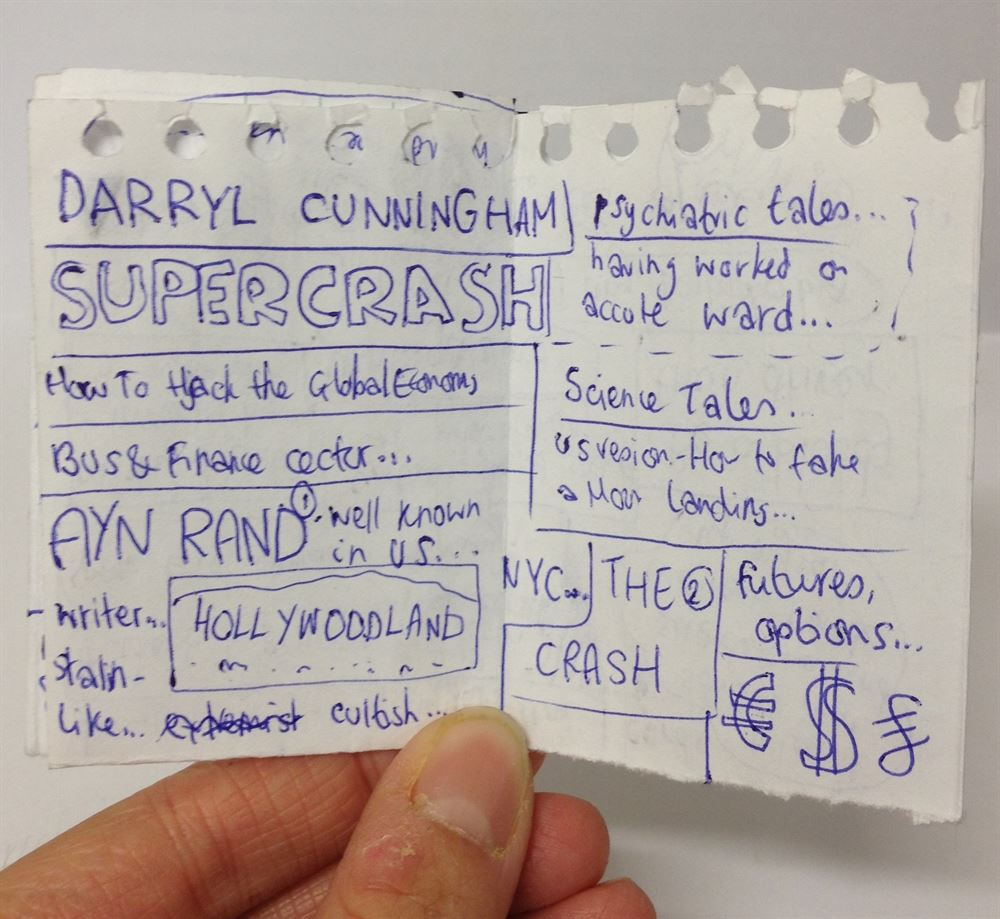 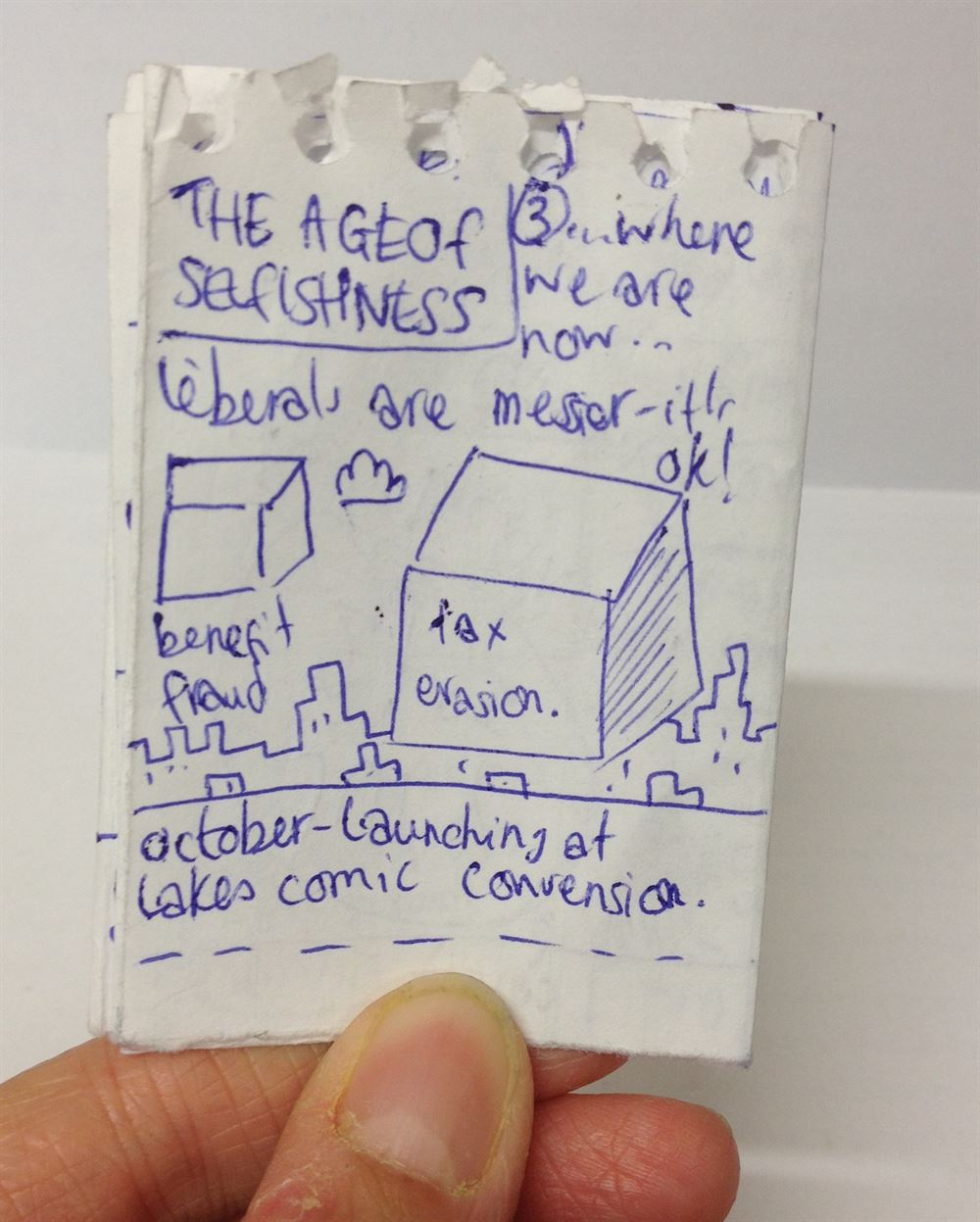 I also heard Darryl speak at the LDC meeting in January 2013! Last time around, Darryl was talking about first two books: ‘Psychiatric Tales’ which is a combination of his personal experiences with depression, and also of his experiences working on an acute psychiatric ward. His second book ‘Science Tales’, “debunks popular myths and exposes the lies of scientific naysayers and conspiracy theorists”.

Today Darryl was talking about his upcoming book: “Supercrash: How to Hijack the Global Economy”. It will be launched at the Lakes Comic Festival in October this year.

I absolutely love Darryl’s drawing style and his humour. With this new book Darryl spoke of making a conscious effort to make his drawings better and use colour effectively. It definitely shows, as the colour palette is very striking, and the drawings are fantastic to look at and deceptively simple.  I particularly love the cityscapes.

I really admire how he tackles huge topics with such a lightness of touch – making amusing and easy to understand comics from complicated and difficult subjects.

One thing which I found particularly interesting in what Darryl showed us was the panel illustrating what percentage of funds the government loses due to benefit fraud, versus what is lost on tax evasion. It was startling to see it laid out in this way, so infuriating too about how the media mis-represents things like this.

Another thing I took from Darryl’s talk was that liberal minded people are by nature, a bit messier. Thanks Darryl – at least now I have an excuse! : )

2. Laydeez Do Comics is 5 Years Old! On Tuesday 1st July in London. Places are free but you have to book in advance:

3. Sarah Lightman: Symposium for Jewish Comics Makers: If you are interested in participating in this, please get in touch with Sarah:

5. ‘Violence: A Conference in Comics’: Click here to download the call for papers. Deadline for abstracts is 14th June 2014.

6. DIY Cultures Zine Fair : I did my own bit of shameless self-promotion as I took part in this zine fair (Sunday 26th May in London). You can find out more and keep an eye out for next year’s event here

7. Lakes Comic Festival & Thought Bubble: Two great events comic up in autumn this year. LDC have a stall at both of these events. Find out more here: http://www.comicartfestival.com/ http://thoughtbubblefestival.com/ .

8. LDC Collaborative Zine: It would be great if we could put together a collaborative zine to sell at Thought Bubble & the Lakes Comic Festival. If you are interested in this idea (details a bit sketchy atm!) please get in touch! Bex_purple@msn.com .

9. LDC Speakers Wanted!: If you would like to give a talk about your work at LDC Leeds, or have an idea of someone you would love to hear from – do let us know! It can come off, as we found out when someone suggested Gemma Correll (Gemma spoke at LDC Leeds in November.) Please email: laydeezdocomicsleeds@gmail.com 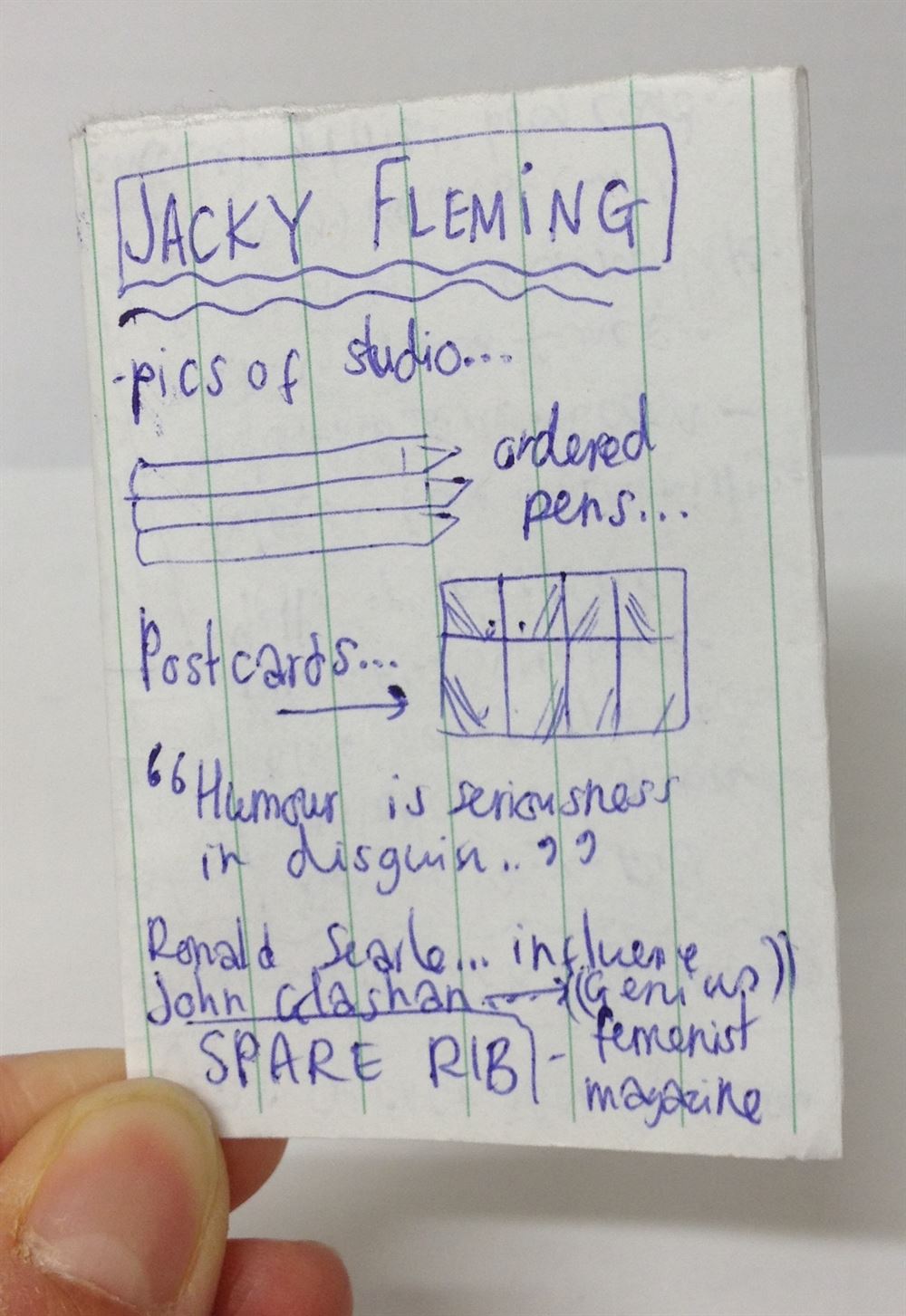 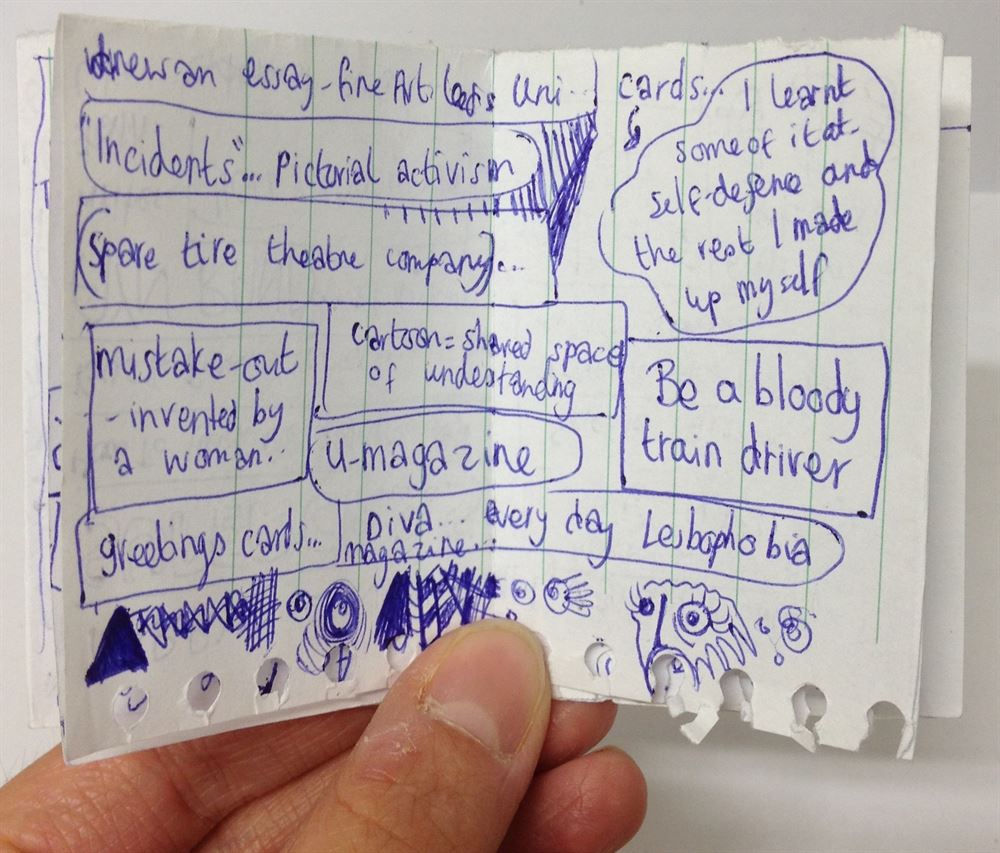 Quite a few of the audience members had come to tonight’s meeting specifically to hear from Jacky. I had seen her at some of the past LDC meetings and was really interested in hearing from her. I don’t massively see myself as a feminist, or pretend to know a great deal about feminism, so it was an education for me to hear from someone who is so well respected in these circles and who very clearly is a feminist.

Jacky started her talk by showing us some pictures of her studio – I love seeing where people work, and Jacky’s studio looked fab! I especially loved her shelves where she keeps all her postcards, and how all her pens were lined up in order (I do this too with my pens!)

Jacky studied Fine Art at Leeds University, and once submitted a drawn essay. She told us of some of her artistic influences which included Ronald Searle and John Glashan (who she described as a genius). I can definitely see similarities reflected in Jacky’s work, and I really do love her style, it seems very loose and free (though we heard it takes hours for Jacky to draw them!).

Jacky was first published in a feminist magazine called ‘Spare Rib’ (you can pick up old copies of spare rib on ebay). She said that the first original artworks she submitted were cited as being the worst the editor had ever seen! I would have loved to see some of the original drawings, where she had covered over mistakes and used ‘MistakeOut’ (I learned that ‘MistakeOut’ was invented by a woman, very interesting factoid! Find out more on the subject here).

Jacky did a series of illustrated ‘incidents’, things that happened to her, and do still happen to women on a regular basis (e.g. flashing – particularly when the sun comes out). Jacky said there is a “shared space of understanding” in a cartoon and that she sees her illustrations as “Pictorial Activism”. There’s a whole series of Jacky’s cartoons, a lot of them featuring business men in suits, depicting casual sexism and the hypocrisy visible in our society.

There were some parallels in Jacky’s cartoons to what arose in Darryl’s talk, with regards to MPs and bankers with their overblown salaries and bonuses- stealing from the general public whilst saying “look over there! A benefit cheat!”

Jacky made a series of postcards, many of which are still floating around today! The postcards were collated and published into a book “How to be a Bloody Train Driver”.

Jacky currently works on various illustrations and cartoons, such as “Every Day Lesbophobia” featured in Diva magazine. She also has a series of greetings cards available.

Before the meeting finished, all the speakers were thanked, and our host Louise Crosby was thanked too and given a round of applause for all her hard work in setting up these meetings and making it happen every other month- THANKS LOUISE! You do an awesome job and we love LDC Leeds! : D 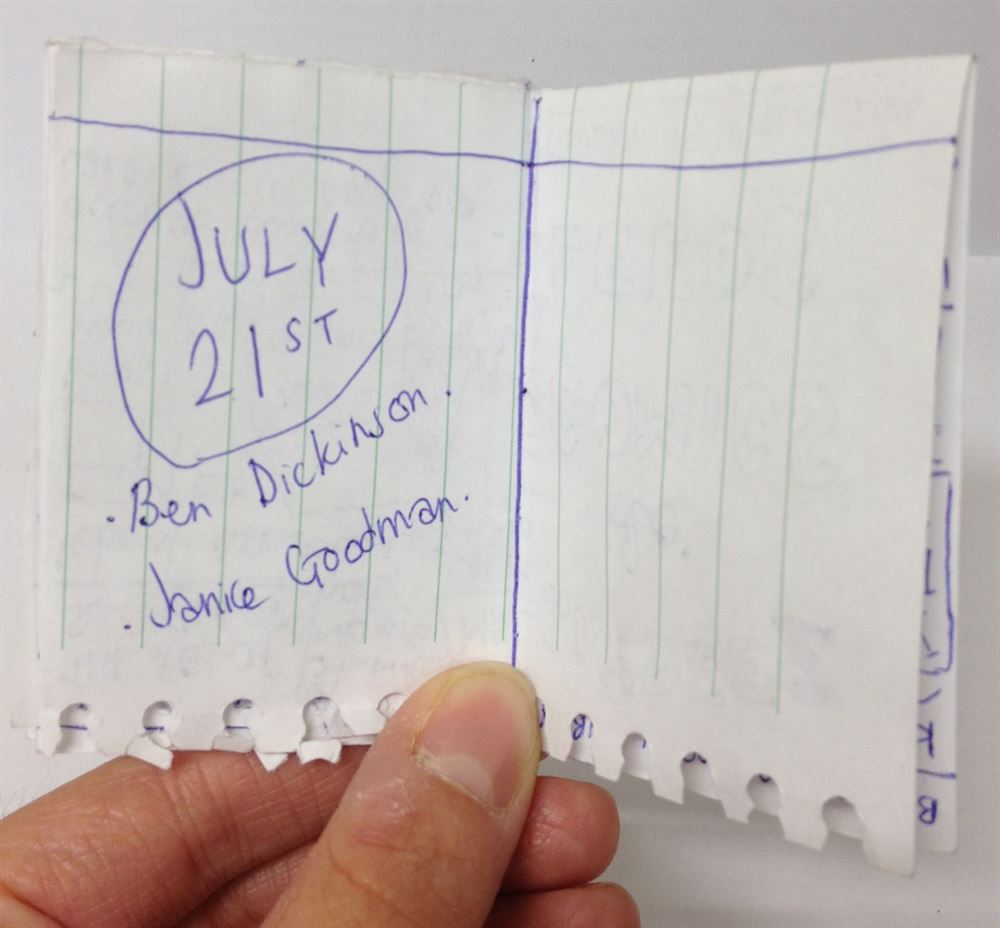 Date of Next Meeting:

I’m currently working on a finished piece of tonight’s meeting. Last time it took me ages to get round to finishing and posting, so I thought I would post the blog post up now – and I’ll add my finished piece on here once it’s done!