Menu
£0.00 Cart
Laydeez Do Comics Leeds: January, 2013
by Christine Chettle
As in November, I was struck by the diversity of the attendees at Laydeez Do Comics. The audience was of a range of ages and interests: as well as comic artists, there was an intriguing mix of students, chefs, illustrators, academics, and a whole lot more.  The speakers were Kate Ashwin, Kristyna Baczynski, and Darryl Cunningham. Interestingly, all of the speakers framed their presentations in the context of how they developed professionally, in quite different ways. Taken together, this combination gave an empowering and multi-faceted inspiration. In addition to the considerable insight given in their presentations, each presenter was kind enough to answer two further questions from me about a) women in comics and b) any specific words of wisdom for artists just starting out.  Before talking about the feature artists, here’s a quick plug for some other projects mentioned during the session. The Blood Bag Project is a craft project that aims to raise awareness of Diamond Blackfan Anaemia, set up by the aunt of a 2-year-old girl who suffers from this condition (Chloe). Check it out here: www.wix.com/leighlalovesyou/thebloodbagproject.  Becoming is a feminist coming-of-age collective, currently accepting proposals. Check it out hereː www.project-babe.tumblr.com. I’ll also talk about my own work at the end (part of the perks of blogging for Laydeez Do Comics), so stay tuned for that. I’m afraid I’m more one to consume comics and talk about them rather than draw them, so please have patience with my attempts at illustration . . . 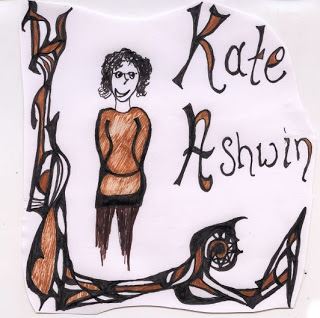 Kate Ashwin:
www.widdershinscomic.com/, www.kateashwin.com/ and @katedrawscomics
Ashwin has been working in comics for twelve years.  She started off with Darken, a swords and sorcery comic and she currently writes the Victorian webcomic Widdershins.  Widdershins is an alternative version of Victorian Englandː it represents Victorian Yorkshire as an epicentre of magic and has been called ‘Indiana Jones with magic’. In contrast to other webcomics which follow more of a diary format, she always writes a story arc first.  Ashwin finds it helpful to use short stories to test out characters.
Ashwin talked a lot about how artists can use social media to raise their profile. She has just recently funded a graphic novel through Kickstarter, which she was able to do in part because she has a fan base.   Establishing a fan base takes time and can be difficult, of course.  Ashwin has built this up over the past twelve years, through being connected with other webcomic artists in various different ways, including conventions, ads like Project Wonderful, and through the comic art buzz on twitter/facebook/tumblr, which helped her to disseminate the project and other work.  Kickstarter (an independent crowdsourcing programme) has different tiers of rewards, offering a chance for people from different incomes to contribute. As well as the comic, she offered extra book pages, bookmarks, and excerpts from the drawing process.  Her project was funded in just 2 weeks, reaching twice its financial goal. This occurred partly through her fan base and partly through promotions by Kickstarter, which come as part of its package. She was also assisted by some generous re-tweeting from Neil Gaiman!
How is it being a female webcomic artist in the comics industry?
Being online is a shield from potential negativity, especially as Ashwin’s  public name is gender neutral ,  which helps since people assume that it is male by default.  There is a danger than people can be a bit creepy at conventions; people sometimes focus more on the artist’s self-portrait than their actual work. However, generally Ashwin has been able to deflect unwanted attention.  There is a sense of ‘background radiation’ but this is changing: fifty percent of webcomics are by women.
Any advice?
‘Draw what you’d like to read; that’s something I’ve gone by. There’s a lot of excellent stuff out there and it’s great to be contributing to it. Take risks!’ 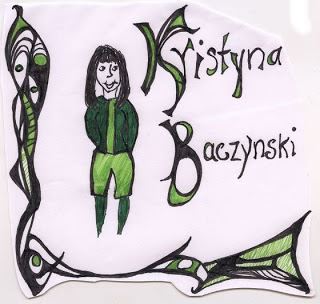 Kristyna Baczynski
http://www.kristyna.co.uk/ and @kbaczynski
Baczynski is a freelance comics artist, an illustrator, and a designer. She has been drawing since childhood, and so decided to do a degree in Graphics and Design, specializing in illustration and animation. She won a Northern Design Award for a short animation that she did during her final year, which led to her working for the animation and media development team at Hallmark Cards’s Creative Studios in Bradford; she eventually became a designer and art director there. Baczynski worked on comics after hours, often staying up until one in the morning.
After university, she found herself lost without the peer support she’d known from likeminded friends in her course.   So she created some little ‘zines—these were just sheets, folded and then cut up by hand– and bought a table at Thought Bubble Comic Festival 2009 to sell them, and discovered a whole world of inspiration. As well as making back what she’d spend on the ‘zines and more, Baczynski made friends with other comic artists across the UK who have helped and inspired her ever since. Some of these are Tom Humberstone (another comic book artist and also the editor of Solipsistic Pop), Matt Sheret and Julia Scheele (the people behind We Are Words and Pictures, publishers of the comics paper, Paper Science).  Baczynski has since contributed to multiple issues of both Solipsistic Pop and Paper Science. She continued to work hard on her comics outside of 9-5 hours, making self-published comic books and ‘zines to sell online and to take to fairs and conventions.
Her hard work has paid off. In 2011, Baczynski was the first Thought Bubble Artist in Residence, which was affirming in many ways.   She was asked to be part of Nelson, a collaborative story anthology created by comics artists all over the UK. Nelson was coordinated by Rob Davis and Woodrow Phoenix and published by Blank Slate Books.  Baczynski received positive mentions in both the Guardian’s and the Observer’s reviews of Nelson, and was also invited to Hay-on-Wye Literature Festival as an author in 2012 because of her work in Nelson.  In 2012, Baczynski decided that she had enough of a portfolio, of a reputation, and enough experience to go freelance.
What is it like being a woman in comics?
“I’ve never felt any negative stereotypes for being a woman. Women are underrepresented because comics have a stigma of boys playing around. If you work with a small press, you find there is an equal percentage of varied demographics, a fairer demographic. The more people raise awareness of the presence and potential of women in comics, the more change will come.
Any advice?
‘Comics are a labour of love. And it does feel like labour sometimes, especially when you’re working into the night between working a day job. But I find that they are the culmination of all my skills and they stretch and test those skills more than any other work I do or have done. Writer, typographer, designer, illustrator, painter, colourist, printer [ . . .] It’s all in one medium and you apply and grow all those skills as a comics creator, and I find that so rewarding.’ 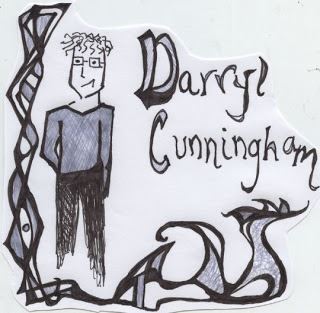 Darryl Cunningham
http://darryl-cunningham.blogspot.co.uk/ and @AcmeDarryl
Darryl Cunningham is a cartoonist, and has written Psychiatric Tales, and Science Tales. Cunningham always had a love of doodling and started out doodling buildings in Keighley and York. As a boy, he read Marvel comics and thought ‘I want to grow up and be a superhero artist’.   He studied at Leeds College of Art, experimenting with different image styles.
For a day job, Cunningham worked for a long time on an acute psychiatric ward as a nurse, encountering different forms of severe mental illness, eg.  bipolar disorder.  He uses his book Psychiatric Tales to explore these experiences, which acquired an even more personal aspect when he himself developed depression as result of burn-out at work.  His cartooning skills became a way of battling depression. By putting his interests to creative use, a new landscape emerged.
Cunningham was particularly inspired by Marjane Satrapi (writer of the well-known graphic novel Persepolis, which charts Satrapi’s childhood and teenage years in Iran and Austria).   He started to keep a cartoon diary which combined his experience of depression and his years of experience on the ward, focusing on an immediacy of style.  Cunningham made the typeface from his own handwriting and incorporated photographs into his drawings.
He started putting chapters on the internet and received a huge response, developing an online fanbase. This fanbase allowed him to publish the original cartoon diary as Psychiatric Tales —  Cunningham found that ‘if you build up a fanbase online, then people [publishers] come to you’.  He received support from the comics communityː Scott McCloud helpfully put a link on his blog, for example.  As a result of this fanbase, Cunningham has published Science Tales (which tackles the subject of science denialism including anti-evolutionism and climate change denial) and is currently working on Political Tales (which examines police accountability).
What’s your take on women and comicsʔ
‘Sometimes women face a resistance in the comics world – for example, sometimes online, there can be sexual aggression towards women.   Men should take steps to become aware of women’s perspectives, through reading women’s blogs, for instance.   I would like to see more women getting involved, as they bring new subjects and new perspectives.’
Any adviceʔ
‘Look deep in yourself for the qualities you need to survive – your talents, hopes, dreams and desires – because these are the things that will save you.’
Who am I?
My name is Christine Chettle and I’m a big fan of webcomics.  I’m also a PhD student at the University of Leeds.  My thesis examines, among other things, aesthetics, social transformation and fantasy in Victorian fiction (works by Charlotte Brontë, Charles Dickens, George Eliot and George MacDonald).   Because of this,  I’ve discovered a fascination for sequential illustrationː last September I gave a conference paper on Victorian cartoons featuring crinolines (‘The Value of Enlargement:  Crinolines and Gauging Community in George Eliot’s Daniel Deronda’ ) and I have a book chapter coming out next year on sequential illustration in two novels by Charles Dickens (‘Graphic Haunting: Illustration and Liminal Masculinity in Charles Dickens’ Nicholas Nickleby and A Christmas Carol’ in Haunted Men: Masculinity in Victorian and Edwardian Ghost Stories(Pickering and Chatto, 2014)).  In addition to all this, I’ve just started a blog (http://fantasiesofthevictorians.blogspot.co.uk/) and I’m launching an international collaborative project ‘Subverting Laughter’ which will use sequential illustration as a digital storytelling method.  Check the holding page out here: http://subvertinglaughter.wordpress.com/.
You can find me on Twitter at @Cherissonne and email me at c_chettle@yahoo.co.uk, en08cc@leeds.ac.uk or c.e.chettle@leeds.co.uk.  My academic profile is here: http://www.leeds.ac.uk/arts/people/20040/school_of_english/person/1452/christine.