The last Laydeez Do Comics Glasgow meeting of 2015 took place in The Glasgow Women’s Library on October 21st, and having spoken at a previous evening I was pleased to come back this time as a guest blogger for speakers Lise Tannahill and Becca Tobin. Despite bad weather and delayed trains a great night was had, so without further ado here are my notes on the evening. 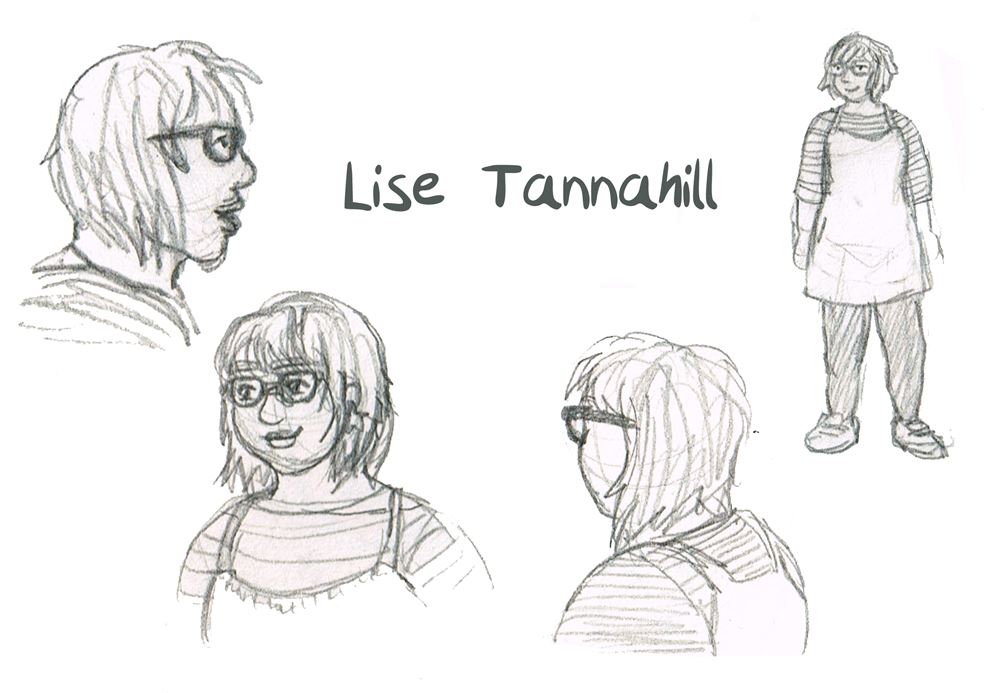 First up was Lise Tannahill talking about her PHD research into regional French comics, which included travelling to Corsica and speaking with locals and comic-creators. Lise started off by explaining that as French comics developed completely separately from American comics, they’re an excellent viewpoint into French culture and national consciousness. This has allowed Lise to study the representations of French regions within the larger national culture, the island of Corsica in particular. She gave a brief history of the island: Corsica oscillated between being part of France and part of Italy for a long time, finally ending up part of France. During the 20th century a number of factors lead to the rise of a nationalist movement amongst the island’s population, and in the later half of the century this developed into armed resistance against French rule which continues today.

Lise then went on to speak about two mainland French comics (“Asterix In Corsica” and “L’Enquete Corse”) and the stereotypes about Corsica they portray. The Corsicans in Asterix are proud and easily offended bandits who hold silly grudges. “L’Enquete Corse”, which was produced in 2000, updates the stereotype to the modern day. In this book Corsicans are balaclava-wearing terrorists who don’t even blink at the constant explosions and violence taking place regularly on the island. 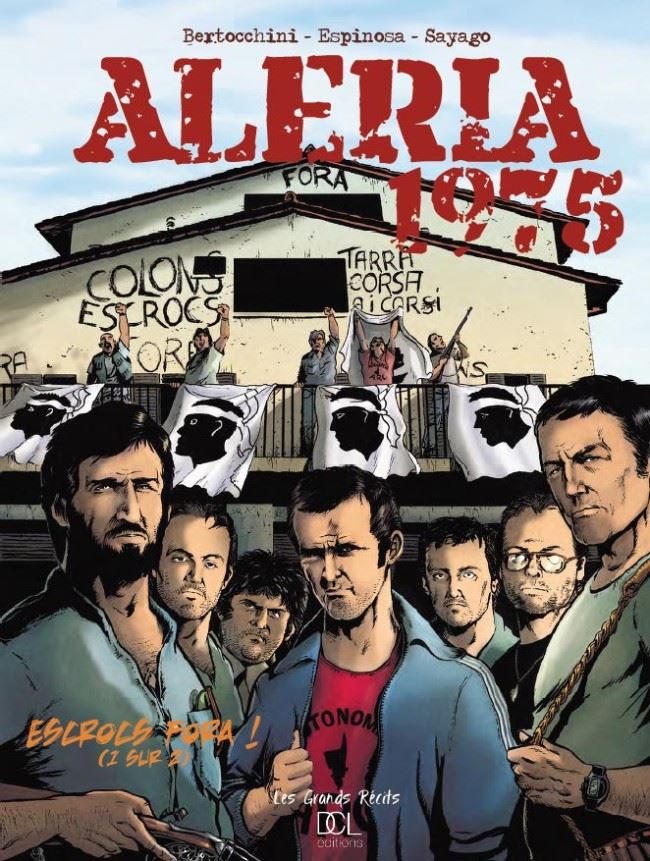 Moving on from the French national view of Corsica Lise spoke about DCL, a publisher based on the island. They’ve produced comics about Corsican history and folklore, which portray the locals as they see themselves rather than through the stereotype-ridden lens of mainland France. Lise then explained that more recent books published by DCL have moved away from their previous politically neutral stance, and have told both fictional and non-fictional stories about Corsican nationalism. One in particular, “Aleria 1975”, retells a key historical event in the Corsican Nationalist movement and includes transcripts and interviews from eye witnesses, so it functions as a historical document as well as a comic. (As a cool aside, Lise actually met one of the “main characters” from the comic during her stay on the island.)

Lise concluded her talk by pointing out that because comics are a huge part of French culture, DCL are doing quite a subversive thing by using this national-renowned medium to tell stories which disagree with the views and opinions held by mainland France.

As someone who has zero knowledge of Corsica (and very little of French comics generally) I found Lise’s talk fascinating. She did an excellent job of summarising histories and background information, before going on to talk in detail about her studies. The contrast between how a region sees itself compared with how it’s seen on a national level is really interesting, and Lise’s personal anecdotes about her experience staying in Corsica added an extra dimension to her presentation. 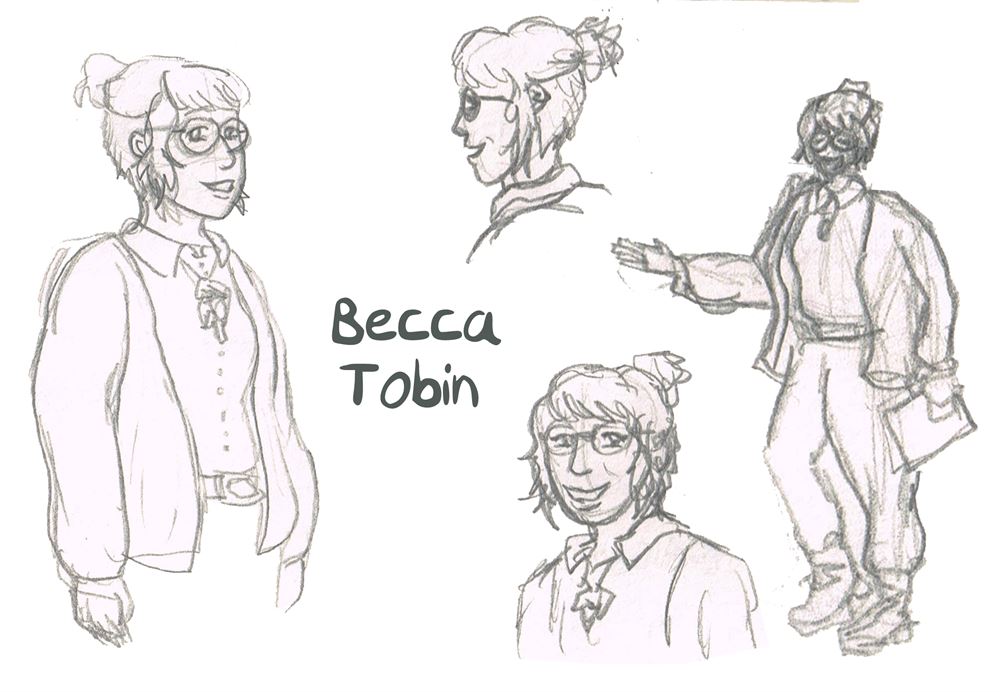 The second speaker of the evening was Becca Tobin, a comic artist and illustrator whose work was shortlisted for the British Comic Awards “Emerging Talent” category in 2014. Before she began, Becca described her presentation as a “pep talk” for those who are new to comics or who just need some encouragement. She spoke about how historically comics have been “disposable”, starting off in newspapers and being thrown away once they were read. Despite some looking down on the medium because of this, Becca discussed how disposability is actually one of the comic mediums strengths. The cheap and DIY nature of comics has resonated with lots of underground and counter culture scenes, with low budget zines and books being produced by individuals rather than big publishing houses. This means that today comics are as varied as the people who make them, produced by individuals as well as teams and tackling topics fun, deep and everything in between. 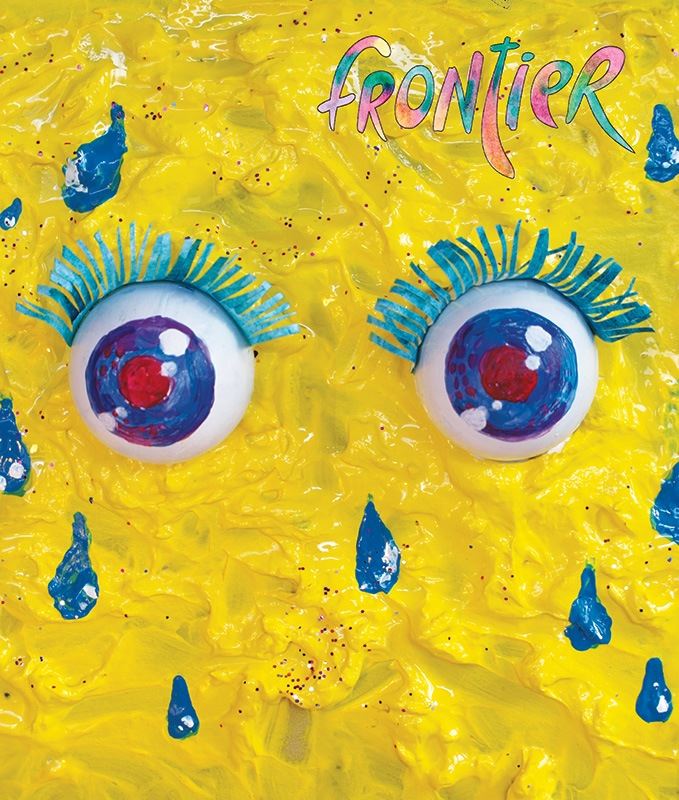 One of my favourite quotes from Becca’s talk was “Everyone can and should make comics”. She gave a series of tips for how to make comics, such as drawing every day, taking inspiration from real life and not worrying about being “good” at drawing. Regardless of what skill level you start out at, you can make comics. Becca then spoke about how the internet can be a great resource for artists to share their work and connect with and learn from other creators. She also included a side-note about internet usage as an artist that really resonated with me – don’t let yourself be intimidated or discouraged when you see other artists who are “better” than you. Everyone has different styles and levels of experience, so if you start comparing yourself to others online in a negative way, step away from the net for a while! 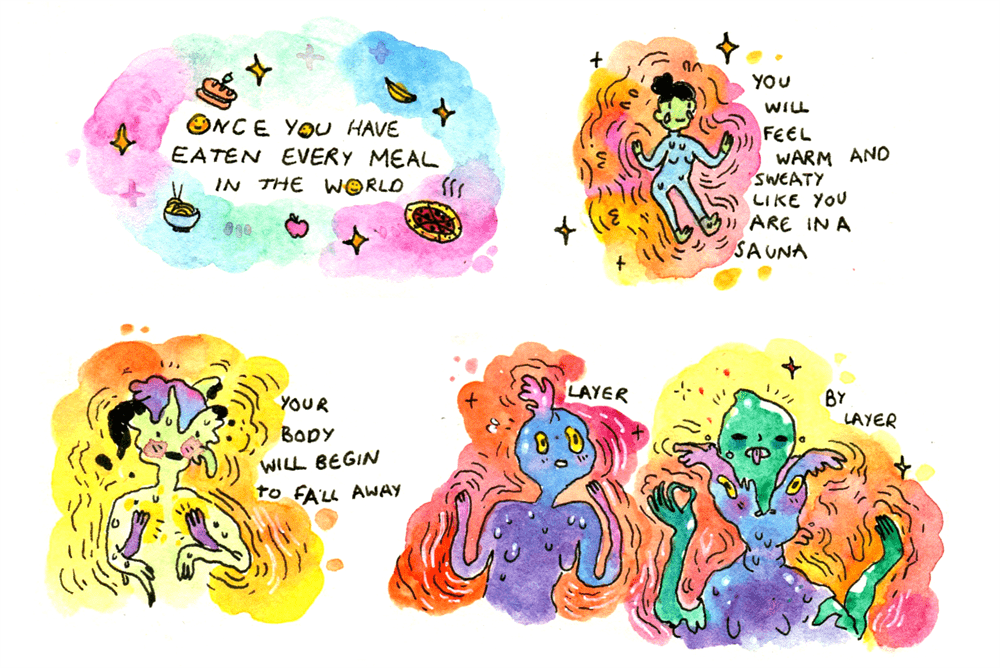 One of my other favourite quotes from Becca’s talk was this: “Comics can be used as tools to understand things, and as a way to have fun as an adult.” She concluded her thoughts on comics with a final piece of advice: start by finding something that makes you feel something, and then take that and use it in your work. Becca’s presentation was very fun and enjoyable, and she had produced a series of lovely watercolour illustrations to go along with each part of her talk (Including a drawing of a cat riding on a dog – something I never knew I needed in a powerpoint presentation until now). Comics are definitely a labour of love, and over time it’s easy to start feeling worn down as a comic creator. Pep talks like Becca’s remind you of why you started making comics in the first place, and renew your enthusiasm. As someone who’s been making them for a few years now, I really appreciated it.

Becca has a really beautiful drawing style. Working traditionally rather than digitally, she combines her inked linework with beautiful watercolour washes. You can see more of her work here: http://beccaandthebox.com/