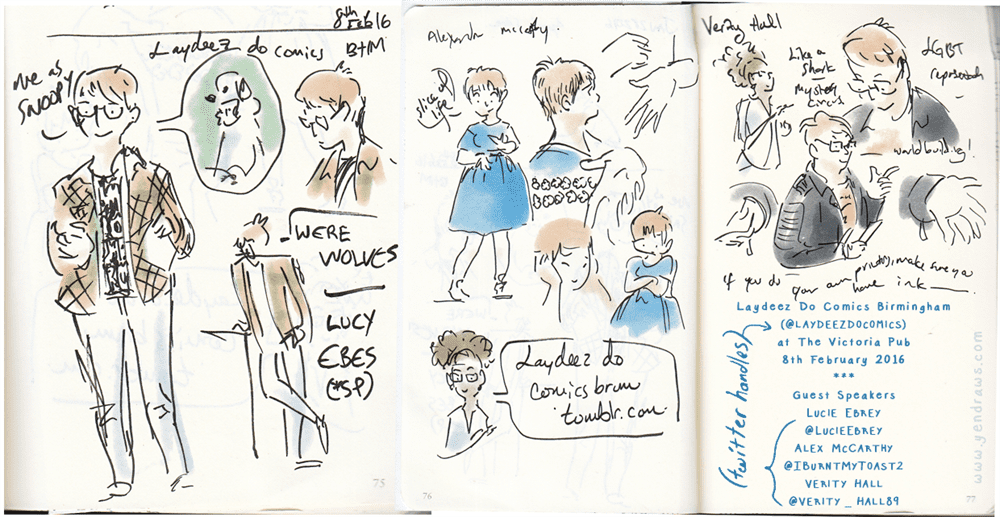 She hated visiting her Grandmas as a kid, because there was nothing to do there! No toys, no books…but she would go to the library to see what graphic novels they had. She sort of liked superhero comics, but they didn’t quite scratch an itch she had for something more…it was at the library where she found Maus.

It was totally different than anything she’d come across before, and she realised comics can be more than action filled bam pow snap kinda strips.

She also came across the work of James Kochalka, who had kept a daily comic diary up for 14 years!

She was so impressed she decided to give it a go herself, and so began her own comic diary.

(fun fact: She called it Muggyebes, a nickname from her childhood, and draws herself as a dog because she’s always felt like she didn’t fit in,  and so she chose to visualise that, though in hindsight she feels like she probably should have gone for a rabbit).

She’s currently working on a joint-project called “Werewolf Social Club”,  about an epidemic where only women were turning into Werewolves. What would they do? Where would they go? This is a lady to watch! : )

2nd Guest Speaker was Alex McCarthy, who has just published her first comic “1 in 100”, about a young girl with Autism dealing with everyday life with her sister. She’s currently studying Illustration at University.

There are hardly any comics out there with girls with Autism, and she was inspired by the visualisation of the anxieties in Katie Green’s Lighter than my Shadow. She decided to go create her own comic.

1 in 100 is part of her animation from university, and did an accompanying video with it.

3rd Guest Speaker was Verity Hall who talked to us about her recently published comic “Mystery Circus”.

She graduated in 2014. Her main aim in her comics is representation, and Sophie Campbell‘s comics are a huge inspiration in that respect.

“There’s always a risk writing a character like Mal, a trans WOC because I am neither, and I do worry about writing it well but I’m very aware I’m coming from an unfamiliar background. So far I’ve not written anything I would consider offensive but you never know how people might read something. I would happily listen to what someone has to day and try and improve, but in the end it depends on what they’ve taken issue too I suppose.”

She decided to take the leap last year and attended MCM Expo with her work. It was thwarted by her printer running out of ink, but she went along anyway and met the co-ordinator of Laydeez do Comics Birmingham.

She’s looking forward to doing more comic collaborations with her friends from Uni.