I am Simone Lia. I am a comics artist and illustrator and the author of Fluffy and Please God Find Me a Husband! Both published by Jonathan Cape. You can find out more about me and my work from my website and blog http://www.simonelia.com I was invited to be the guest blogger for the big birthday…

What better to place to celebrate the Laydeez Do Comics 5th birthday than in the brand new swanky flagship Foyles store. I oohed and ahhed upon entering the building in the welcoming environment with its wide staircases and open spaces that allow you to read books in an informal and buzzy setting.

Taking the lift up to the 6th floor I was surprised when Guardian journalist Laurie Penny stepped in. I think it was her. She’s quite famous for being a feminist and having lots of opinions.  I didn’t want to gawp but from my peripheral vision I could see that she was standing right in my face looking at me. A bit intense.  I thought perhaps this was a method that famous people use to intimidate normal people. 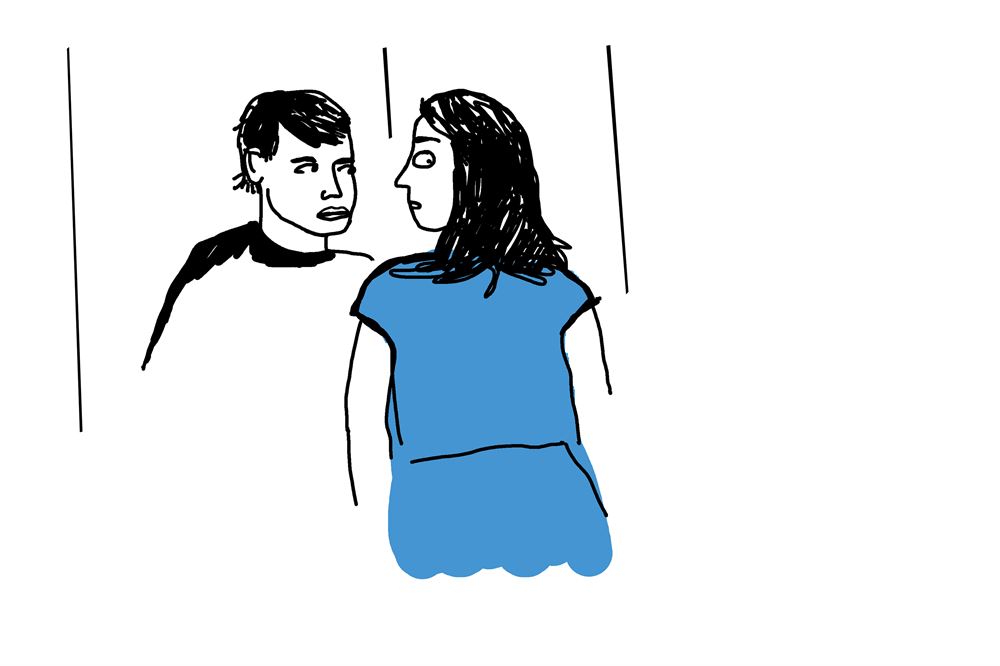 In the end it turned out that I was facing the wrong direction in the lift and was blocking the door. Classic lift faux pas.

The events room on the top floor is extremely slick and modern.  It wouldn’t have been a surprise if the evening had kicked off with Sarah and Nicola arriving on the stage on rising podiums in a fog of dry ice. They didn’t do that but instead emphasized the essence of what Laydeez Do Comics is about. And that is a place where the audience matters, everyone feels connected and a community is created.  Thanks to Nicola and Sarah; Laydeez is a welcoming forum for inspiration, creativity, sharing and learning.

Nicola made a rousing and inspirational speech that acknowledged the humble beginnings in 2009 in a place with a leaky roof. 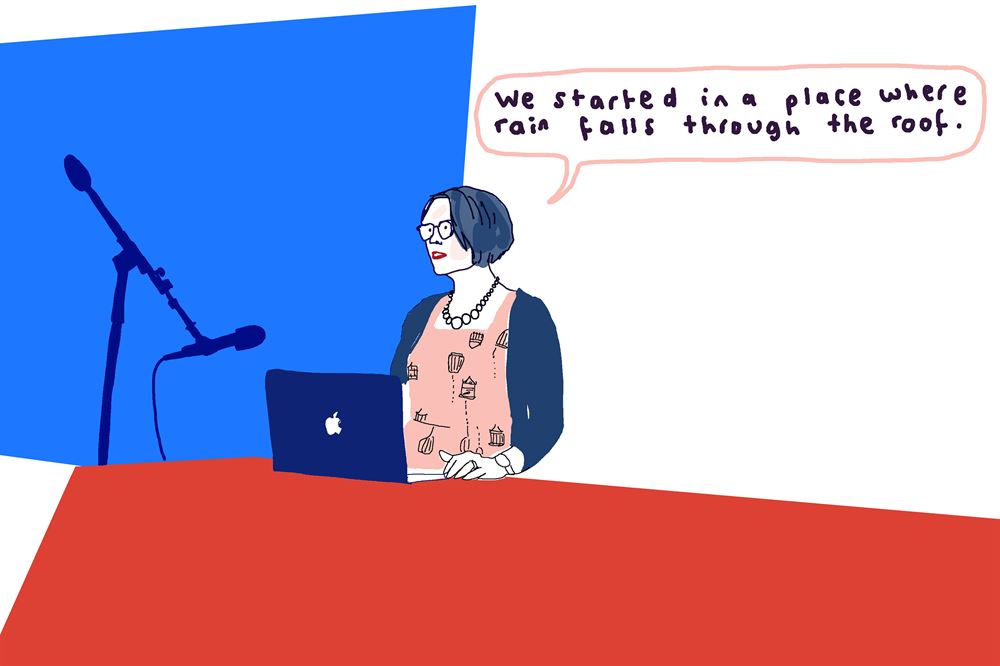 Personally, I remember it as a cold, concrete floored room on Brick Lane, with rain filled buckets and dirty faced children, wearing rags who sang about pick-pocketing techniques and Nicola singing, I dreamed a dream.  At least I think that’s what I remember…

Laydeez has kept it’s integrity of connectivity and has flourished, impressively growing in numbers with branches throughout the UK and Internationally. Look at how many places it’s popped up at! 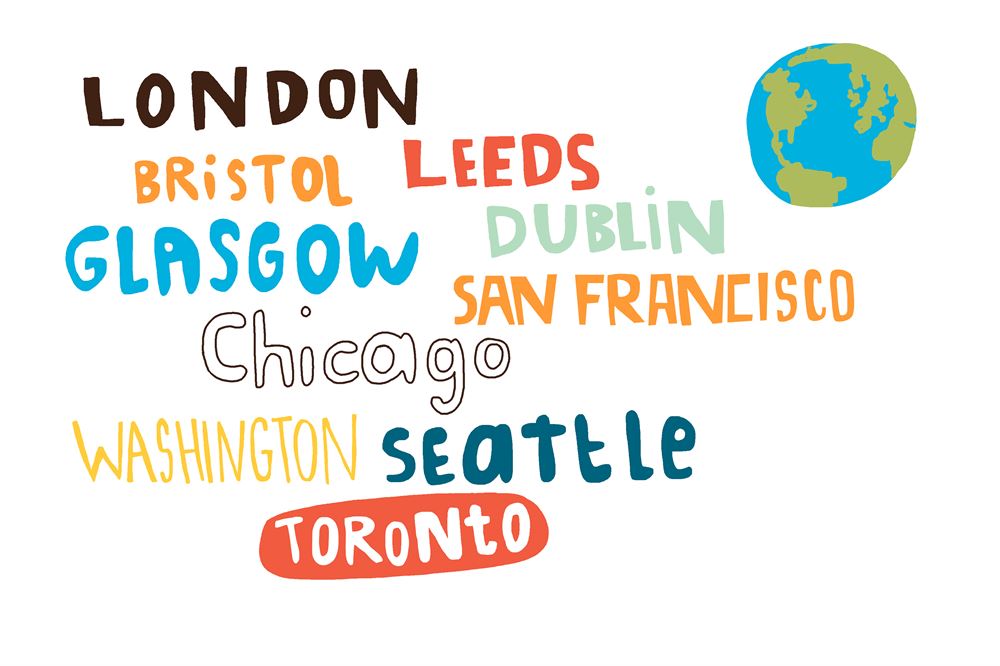 Tonight was a celebration of this and bringing together some of the organisers that run Laydeez here and abroad.  Before the speakers spoke we viewed Sarah’s epic home made birthday cake.  It would be the last of those cakes. From now on it’s going to be Foyle’s fodder. 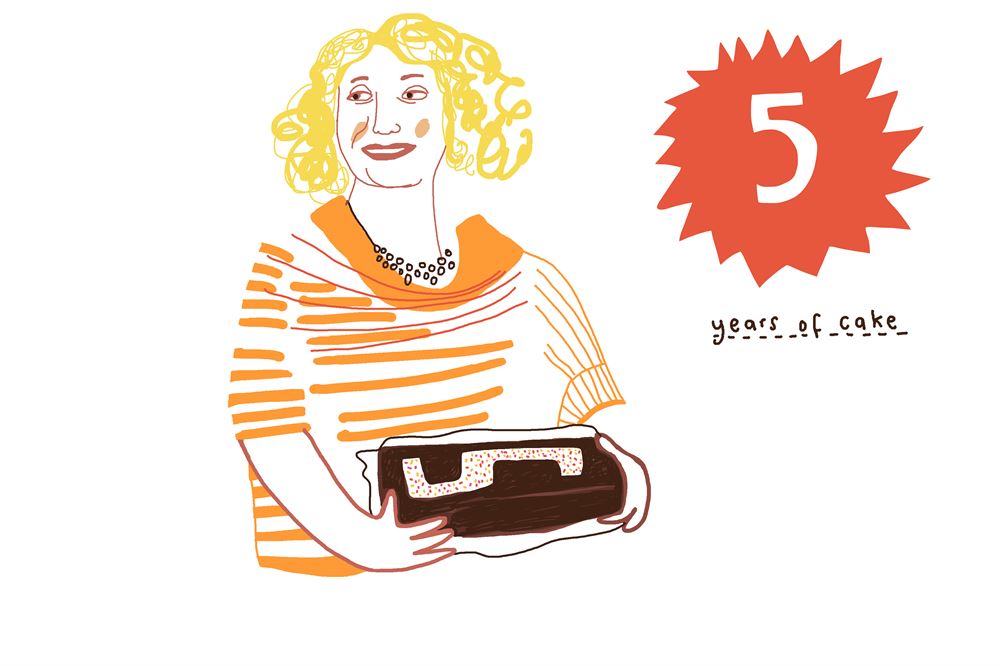 Anna Brewer artist and the Glasgow Laydeez organiser, was the first speaker. Anna is from London, she lives in Glasgow and was in the States for 25 years. Through her work she explores areas that she lives and does very unusual and playful research as to what kind place it is that she’s living in.  She finds out the kind of chickens that live there and what kind of farming machinery is used.  Through making artwork she is able to connect and share her experiences with others and convey her own emotional experiences. 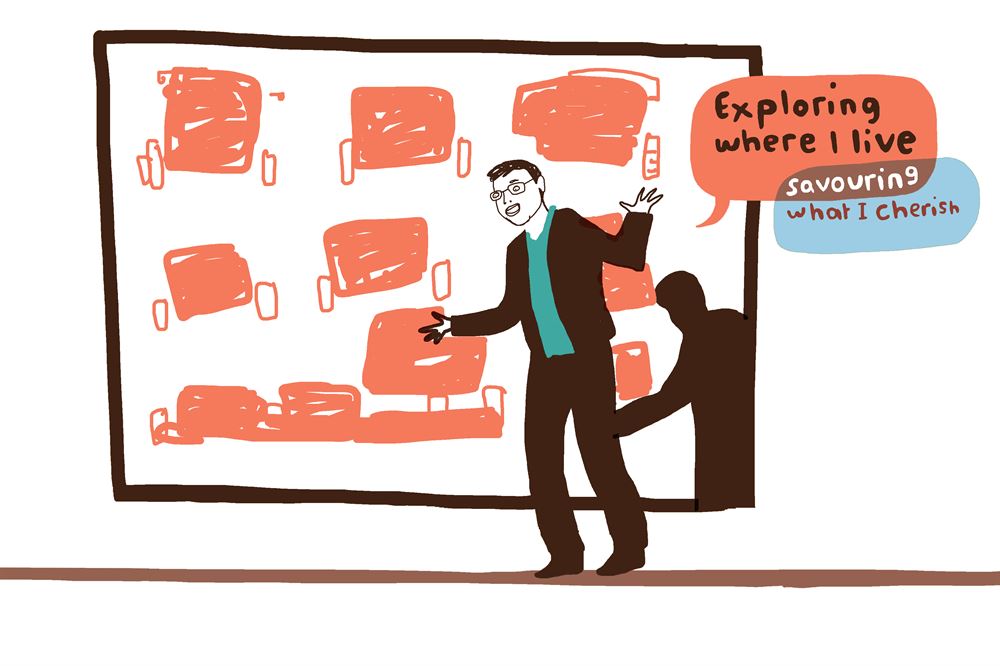 I loved Anna’s unusual outlook and the way that she, for example can compare combine harvesters to a line of chorus girls. You can see her sensitive and beautiful drawings here and more drawing here.  What resonated was Anna’s drawings of a little frog who sometimes, she describes, is a devil frog who voices what is going on in her head.  The inner critic.  I used to try and ignore him but now I let him say everything and it takes away his power.

Anna makes artwork for her HP who, like a loving parent appreciates and values what she does.  At first I thought HP stood for Hewlett Packard.  Perhaps it was time for me to switch printer brand?  Epson just doesn’t do that kind of empathy.  But then Anna explained that HP stands for Higher Power.  My thoughts were that her work then not only becomes a gift to her HP but also a gift to the audience. It did feel like that upon viewing. Thanks Anna!

Next up was a slide presentation about the F Word project from Maureen Burdock, presented by Sarah and Nicola. Maureen Burdock runs Laydeez do Comics in San Fransisco. To see more of her work about and the F Word Project take a peak here

Louise Crosby who runs Leeds Laydeez do comics was next up to show us her work.  I had a massive blog fail at this point as I decided to draw in my sketchbook without taking notes/photos and listen properly on the recorder afterwards.  My recorder didn’t work and this drawing is horrible (!) 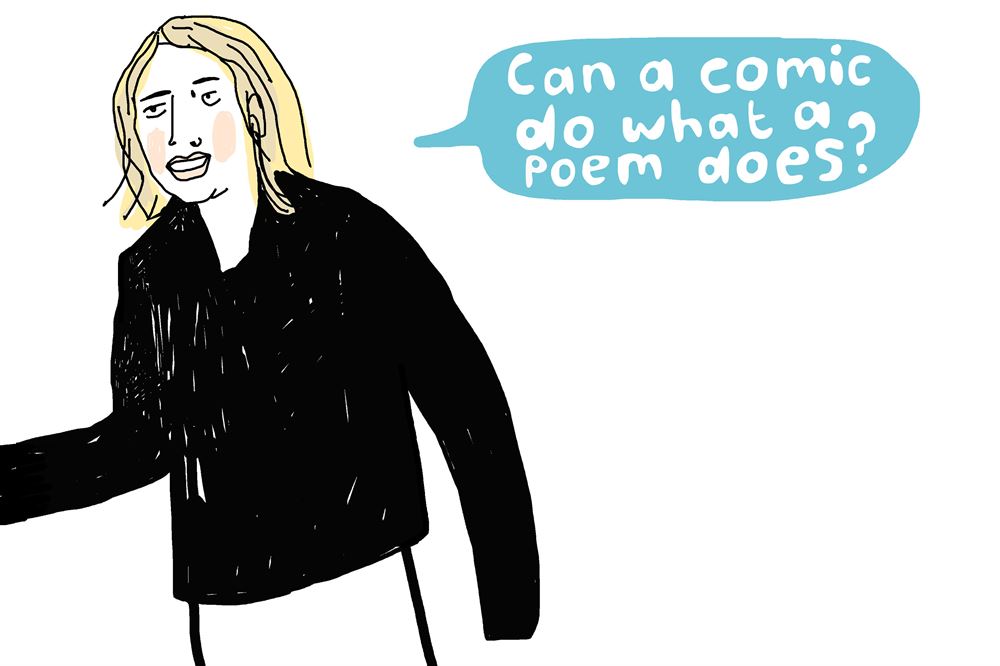 It was a great presentation, Louise talked about her work and accidental start into comics from her print making background and her new arts council funded project Seeing Poetry.  Louise has been illustrating the poems of Clare Shaw.  What struck me whilst listening and making awful drawings in my sketchbook, was the sensitivity that Louise brings to the relationship of image and poetry, particularly, I felt, honouring the silent and unspoken words of the poem.  You can see Louise’s seeing poetry website here.

We watched a video interview between MK Comic Nurse and Nicola. Comic nurse runs the Chicago Laydeez.  MK is a nurse, a comic artist, illustrator, photographer and she talks a lot about comics. You can see that video here.

Paula Knight, who runs Bristol Laydeez do Comics talked about her upcoming book The Facts of Life, that will be published by Myriad Editions. 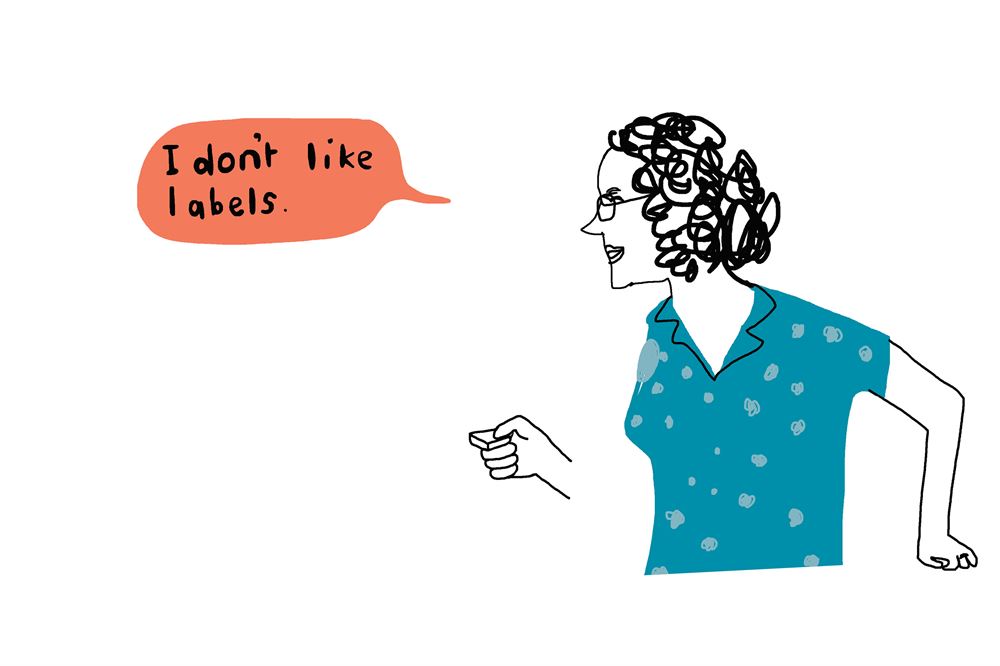 Paula had been to a comics convention in Bristol in the mid-naughties.  She’d felt too female and too old but had found that there were similar people at Laydeez.  Old? Nicola asked. Everyone laughed heartily.  Paula found more than she identified with the type and content of work being made and shown at Laydeez do Comics.

Paula’s artwork is engaging, accessible and brave. She’s widely been exploring themes of fertility particularly with her own, in her artwork.  She showed us some drawing that she’s been making for The Facts of Life. Rather cleverly Paula made spin off comics to take to conventions, this got her involved in the event and she received feedback for the longer form of her work. She is very brave, I think, exposing such personal subject matter to a broad and potentially undiscerning audience. “I received interesting feedback” she said one man pointed at the artwork, pulled a face and ran away.” Another woman read through the whole book and pulled disgusted faces through out. Paula thinks she might have been offended but I wonder if that was the case, there was clearly something about the quality of the artwork that compelled the lady to read straight through.

Sarah Lightman, co-founder of Laydeez do Comics, artist, and curator is researching a PhD in comics at the University of Glasgow in autobiographical comics; “The Drawn Wound, Hurting and Healing”. She is also a new mother to Harry.

Sarah showed artwork from The Book of Sarah, her memoir that will be published by Myriad Editions in 2015.  It’s the unwritten book of the bible, “there is a book of Daniel, and there is a book of Esther, but not of Sarah,” she says commenting that her siblings have the same names and she is the youngest child, wants what the others have. In her work Sarah draws parallels between herself, late(ish) motherhood and baking. Her biblical namesake and her book will intertwine the two characters, contemporizing and positioning her Sarah in the centre.

Sarah also talked about her touring exhibition of autobiographical artists –Graphic Details coming to London this September that will be showing work from artists that that you might not know of. Sarah’s desire is to change the culture so that as artists we are referencing each others work in talks and the papers that we write, and in doing so creating an art history that hasn’t been written yet.  She has a solo show in America September and October.  Last year Sarah was working on the Graphic Details, Jewish Womens Confessional Comics in Essays and interviews, published by McFarland later this year. Sarah is doing this to fill the spaces in the libraries with voices that have never been recorded before.

Maura McHugh (Splinster) Laydeez organiser from Dublin who was not there in person, had a powerpoint presentation. She has a life long interest in sci-fi and horror fiction and is among many other things, the co-writer of Witchfinder which is a five issue mini series published by Dark Horse Comics.  Maura says “horror has been good to me”. You can see Maura’s work here.

Finally we had the other co-founder of Laydeez do Comics, Nicola Streeten.

Nicola asked the question in 2008 – where are all the women in comics?  This is the issue that bonded her with Sarah Lightman and prompted them to start up LDC.   Nicola talked about her latest work which is a commission from The Collection Gallery in Lincoln.  They asked her to work with people who wouldn’t usually visit a gallery and Nicola chose to work with offenders in HM Lincoln prison. Working with other peoples’ stories rather than her own narrative brought about new writing challenges.

Paula had touched on this subject earlier. She’d been working with the transcript of a cancer patient for a research project called The Phoenix Project.  The man was suffering erectile dysfunction due to the treatment that he was receiving – having not met or spoken to the man, Paula’s question was whether she had pitched her sense of humour at the right level. Whether she was being sensitive to his story.

Nicola had a different set of difficulties of a more practical nature.  She’d planned to work with the children who were visiting their fathers. Everything was set up but she found that it was difficult for the children to participate. It was partly the age difference of the children (from 1 to 12) but mostly it was because the children had come to visit their Dads. Nicola had to adapt her approach and the angle that she was coming from, and was invited instead to work directly with a small group of offenders.

As part of Nicola’s PhD research she is setting up Graphic Cultures. It’s a website that will be a platform for comics works that engage with social and political issues. It’s being launched  with Dr Nina Burrowes, who has created a free comics book online telling stories of people who have experienced domestic violence and rape.

The evening was concluded with some chit chat and then being booted out by Foyles staff. It was a brilliant craic, a proper celebration. I came away feeling very inspired and impressed by the artwork that I’d seen and was really impressed at the bold, yet humble vision of Sarah and Nicola.  They have succeeded in executing with confidence and excellence bringing people together and giving those who might be on the fringes, or unnoticed –  a voice and a platform.

So from everyone who has experienced Laydeez do Comics and been inspired or made friendships or been helped in any way,  a massive thank you!  Thanks to Sarah and Nicola and all the Laydeez do Comics organisers. Thank you for all of the hard work that you’ve put in.  We very much appreciate it.