Menu
£0.00 Cart
I am Abi Higgs. I’m a massage therapist and studying counselling. My link to drawing is all quite new, I made a selection of mini one page comics in 2004/2005 about the Sun & Moon chatting in space and as of last year I started getting into it more and making comics that are usually autobiographical or in someway related to my own experiences.

There was a good turn out at tonight’s event with a lot of hustle and bustle at the
beginning. The evening took off with the question, “Have you read anything
interesting recently?” This was a good question and
Carly Guest who I was sitting next to and I, kept writing down titles of books people mentioned.


Is a positive, smiley characther who’s comic I actually swapped with (his The Death of a Salesman) at my very first LDC and which I have mentioned to people in conversation a few times. He does a number of things but he first started making zines before comics. He started with one him and his friends created when he was seventeen to which they gave the title Rancid Zine. They pulished 5000 copies of this zine and sold them all and so Rancid was born! This zine catered for the punk scene in the early part of the naughties. It changed its name from Rancid to Last Hours because they didn’t want to be associated with the punk band Rancid. Last hours included cultural aspects of things as well as music.


Edd and his friend Natalie got involved with the network and community of zines and this led to the start of the London Zine Symposium. When Edd suggested to his friends the idea of the Zine Symposium it was laughed off, however they put one on anyway and it was a BIG success. Before the Zine Symposium there hadn’t been an event where everyone could meet up and so the Symposium grew into an annual event and has just got bigger each year with different people attending and taking part in each event.


He mentioned how the zine world has changed in the last six years. The content isn’t so much about the punk anarachy politics anymore but has broadened out into different areas. People are now expressing their thoughts, visions, creativity through the method of zines in a multitude of topics, I guess the same way music genre has expanded.


The big questions lies with “What is the future of the Zine Symposium?” since Edd plans to step aside. He wonders if it’ll still carry on? He also wonders whether the Symposium should try and get funding or go back to being smaller with just punk zines?


Edd moved onto making comics which he started doing in 2007, beginning with one about cancer cells. He’s really into french comics and so learnt french by doing so. In his comics he draws himself as a monkey, so works under the psyeudonym of Hey Monkey Riot. He started making diary comics as a strip where he noticed how much his drawing improved from the early part of the diary to later on.


When he went to the G20 protest in 2009 he was really close to the Ian Thomilson incident and made a comic of his experience, which was a vey thought provking piece. In Death of a Salesman it was the first time he had played around with metaphore. Edd didn’t want to just publish his own comics, especially since the G20 is a generalised thing.  He decided to publish an anthology against the police and had different people contributing to it from all around the world.


His current working project is based on the Wind In The Willows as an allegory for what’s happening on the West Bank in Palestine. He showed us some snippets of the drawings from this project. In some of his work his drawings can be quite sinister with a dark edge and he gives across strong messages with refreshing ideas. 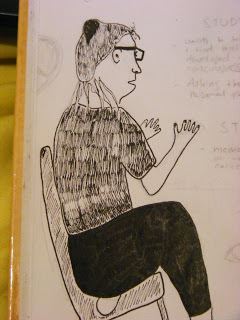 A  PHD student looking at Young Women’s Feminist Stories. She started gaining interest in this area because of the different ways in which the history of feminist theory in activism has been related through various voices. She talked about how there is a lot

of research about young women’s relationship to feminism and how their lives have been touched and influenced by it and feminist ideas. Also, in the last 10 years the internet has made people a lot more aware of different things that have been going on and Carly said she found it interesting how some of these activist groups, either online or off reference the feminist ideas of the 1970’s.


She has two studies on the go…In the first one she is looking for female volunteers aged between 18 and 35 to take part in a study of young women’s feminist identities. She wants to speak with women in this age bracket about how they developed a feminist conciousness; who influenced them and how they came to see

themselves as femnists – what being a femist means to them. She’s interested in talking to them  about personal photos and images that say something about their feminism and identity.
The second study she is working on is a memory group; a group of women who will be invited to write a collective memory. The idea behind this method is that you are thinking about how your personal memories are social memories.  You write memories in response to trigger words and you look at them as a group.  You look for similarities and differences, it’s a way of looking at how your personal memories connect.

There was a break for tea, cake, alcohol and the like, with chats and new “Hellos” and the cake was wonderful again! 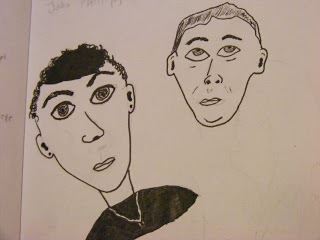 
is the director of the London Print Studio and told us all about the studio itself. The studio is a space used creativly with traditional and digital print facilities. John noticed the hardship of people coming out of university and how there were never any opportunites for jobs or development. He spoke with an intern who worked at a gallery who mentioned how hard it was and he said that he would commission her to research the idea of an internship scheme for London Print Studio.


They successfully raised some public funding to initiate the internship scheme at  the London Print Studio, which they decided to give a comics focus. Then the talk was handed over to


Karrie Fransman
who was employed to manage the scheme.  She spoke about the internship scheme, which is an opportunity to develop professional skills in the creative industry; run comic workshops for 16-20 year olds; receive mentoring from top professional comic creators and publishers in developing your own artistic projects and taking part in creating a graphic novel publication (the anthology). She talked about all the fantastic applications they recieved for the internship. The CV’s often including both pictures and words. They selected five lucky people to participate in the six month scheme. They chose the current five because they were brilliant artists and storytellers and they were interested in educating and teaching. The scheme will run again and details will be announced shortly.


Next  the interns spoke about their individual experience of the scheme.

Isabel Greenberg
graduated from illustration at Brighton. She said the best part of the internship was the workshops and the most rewarding part was working with the kids, that it was a super experience and she strongly recommends it. 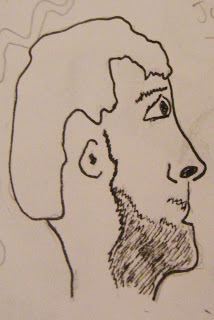 Joe Kelly
said he likes reading comics and it was comics that made him start drawing. He wanted to tell stories as well and not just do single images. He found the internship really useful making him think about what he wants to do next. He wants to make his own graphic novel. 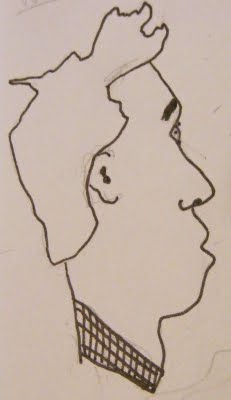 William Goldsmith
or Bill spoke next. He wanted to use the internship to try different things. He was writing a graphic novel before he started the internship, he mentioned that he likes the rhythms of words and sounds of things and how black text on white or white text on black can create a rhythm. He said that the internship has been the nicest thing and it had been cool seeing everyone’s work and refreshing to talk to comics people.

Rachel Emily Taylor
is really interested in narrative art and storyteling. She does 3D film and illustrations, she likes storytelling through all sorts of methods and that’s one of the reasons she wanted to do the internship, plus she’s always been interested in comics. She chooses not to use speech bubbles in her work so instead had them very poetically written and emerging in her work. She said the internship has been really inspiring and she loved teaching the 16-20 year olds and seeing their talent grow.

was unable to come, so Karrie spoke in her absence. Freya has done a lot of freelance illustration. We saw a picture of her doing a mural. She’s aware of text and image and her style is quite digital. She also shuffles her images around on photoshop and plays around with them.


The launch of the anthology will be available from the 9th June from London Print
Studio exhibition.


And so this brought the night to a close. One of the reasons I like going to LDC is meeting all and hearing all the inspiring people that also go along, whether they are there just to listen or to talk and how anyone can get involved. So, another good night of creative souls.


The illustrations included in this blog are a mixture of my own and Lucy Bergonzi’s.