Hello, my name is Dan Berry and I shall be your guest blogger for the February meeting of the Laydeez Do Comics.
I lecture at Glyndwr University in Visual Communication, and I run the BA(hons) in Illustration For Graphic Novels. I keep a blog for the benefit of my students over at thecomicsbureau.co.uk
I’ve been wanting to attend one of the Laydeez events for some time now, but thanks to cruel tricks of geography I’d never managed to make it. February was of course the exception. I was scheduled to be in London with some of my students attending a conference and could finally pay a visit on the Laydeez.
I’ve known Sarah and Nicola for a couple of years, and have always found them to be at the sharp academic end of comics. I’ve always felt genuine enthusiasm and interest from both of them, so I can’t say that I was at all surprised when I heard that they had started a reading group / forum.
Finding the Rag Factory was a bit of a shot in the dark. (literally)
The Rag Factory is a very cool space. Although from the outside The Rag Factory looks like the sort of venue that you might host a fight club or put on a display of bear-baiting this was entirely negated by the warmth of the welcome.
Introductions were made and recommendations proposed including manga at the Japanese Embassy, photography at the British Library, Ponyo and the Drawn Out and Painted Pink exhibition at the Drill Hall.
February’s guest speakers were Kiriko Kubo who is, amongst other things, a manga artist and Sarah Zaidan who is currently working on her practice-led PhD, deconstructing superheroes.
Kiriko debut as a manga artist was in 1982, and she was kind enough to talk us through some of the work that she has produced, including ‘Princess Mother-in-law’, a story that seemed to speak to most of the people in the room on multiple levels…
The recommended read was Alison Bechdel’s Fun Home. The themes covered in the discussion were wide ranging and moved from the quantity of text in the book to the structure of each chapter. Needless to say, Fun Home is a book that bears up to repeat readings. I’ve found that each repeat reading reveals a new aspect or angle to the book.
Paul Gravett introduced us two new books that he’d recently read – Kari by Amruta Patil (Here is a short Q&A with the author) and Forget Sorrow by Belle Yang. Check out her website and then go and check out her work in progress.
After the break, we listened to Sarah Zaidan talking about a project that she had been working on about the ghosts of Savannah College. At this point, I had index-finger-ache from taking half a dozen pages of tiny notes, so thought I’d draw up something on the theme of the talk, hence the ghosts. The dialogue is lifted wholesale from Sarah’s narration as she talked us through the project. 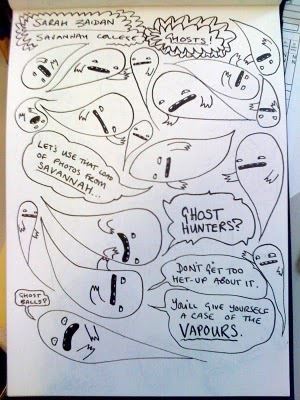 Afterwards, a few of us went to Tayyabs, a local curry house that makes food so good that you’ll want to run away with with it. Sadly, thanks to yet more cruel tricks of geography, it is likely to feel far too long before I can meet the Laydeez again and perhaps elope with a lovely Saag Aloo.