Menu
£0.00 Cart
Meet Emma Mould:
(Please open all images in new tab by right clicking.)
Emma Mould opened up to us sharing her personal experiences, it was a moving moment and I couldn’t help but admire her for it. This comic is just to sum up her talk with us, if you’ll like to know more about her projects follow the links below:
Blogger: Emma Mould (Writer)
Blogger: Andrew Godfrey (Comics artist)
*On the first page, there are 2 images created by Andrew Godfrey and their projects! 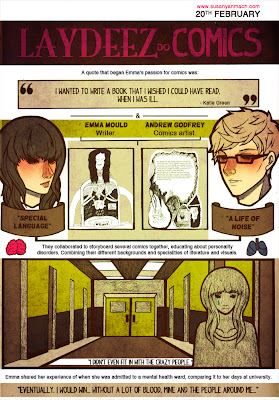 Meet Karrie Fransman:
Karrie Fransman‘s explained admirably how she initially submitted her comic strips to 35 different newspapers, The Guardian were the “first and only” paper to respond. It portrays the reality of getting published and effort you have to go through for recognition. Never give up!
Moving with the flow of digitalisation in the media, Karrie has explored various comic forms, from an tilting iPad app to an interactive comic website for her graphic novel, “The house that groaned“. Her debut graphic novel as already won the approval of many critics and the title of Foyles number 1 book. It delves into the themes of society’s portrayal and expectation of the human body. Referring to academic psychologists, she pays homage to Norbert’s Elias‘ term of “Homo Aperti“, the open man who behaves according to his own natural desires, not embarrassed about his own bodily functions. Society develops creating restrictions to allow us to fit the norm, one of which is how we look physically. Karrie compares the idea of Nigella Lawson VS Gillian McKeith and how we obsess about what we should eat constantly to avoid diseases, obesity etc.
A quote that Karrie refers to is:
“The individual body can be studied as a canvas on which the anxieties and discourses of the larger, social body are reproduced.” –RW Connell: 2002 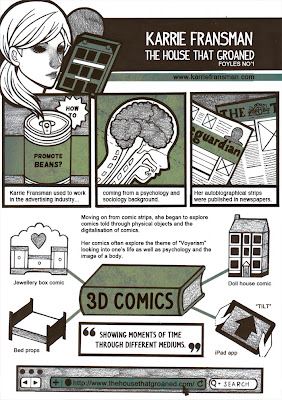 Meet Dr Ann Miller:
Dr Ann Miller analysed the work of Bagieu, depicting it as an autobiographical piece that features multiple selfs. The voice over/narration is ironic and portrays feminism as puritanism. Similarly to Karrie Fransman work, Bagieu’s work also compares body images, but in a negative light. The idea of a “Grotesque body VS the Classic Body” is compared to the working class VS the middle class, depicting the fear of ageing. Miller explains how “Gender” is about “performance“, thus the image of “feminity is a mask“. This could also be seen in Cindy Sherman‘s photography. Through self sexualisation and masqurading, women empower themselves, boosting their confidence. Some examples would be Madonna, the “Virgin Whore“. 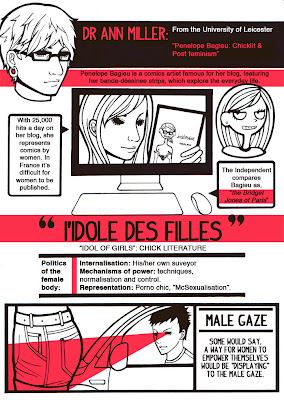