Laydeez Do Comics. Could be described as the grape vine of the comics world, and you know, even the bean stalk as well! I’m very happy to have been invited this week by Nicola and Sarah to report on the latest goings on.

My name is Frankie Sinclair, I’m some sort of an artist, one who sees the world through cartoon eyes! Last year I focussed on starting up a group called the Cartoon Heart Club www.cartoonheart.com and www.meetup.com/cartoonhrt I’ve currently whooshed down a sort of rabbit hole of photography wonderland… When I come out again, I will no doubt run a few more cartoon related events. In the meantime, if anyone is running, or thinking of running a cartoon related event or project and you would like to invite people to attend or participate, feel free to contact me about posting it to or from, the Cartoon Heart Club (contact thru any of the websites).
Well, certainly things rarely do just happen overnight (on the beanstalk theme) but meeting people along the way and being open to talk and exchange can certainly bring golden opportunities and experiences. Something of a theme last Monday night was the comic artists’ discovery and appreciation of the comic scene. Groups and networks like Laydeez have really touched the lives of some artists. The discovery of one group can connect an artist into a whole network, internationally and at home. Although as we discovered, language can sometimes be a problem…
It was a packed night at the regular Rag Factory venue There were four main presentations. Three comic artists described their work, recent and past:
Sean Azzopardi
Francesca Cassavetti
John Miers
plus the London Print Studio Comics Collective comic interns (phew long title) reported back from the Angoulême International Comics Festival.
Sean Azzopardi 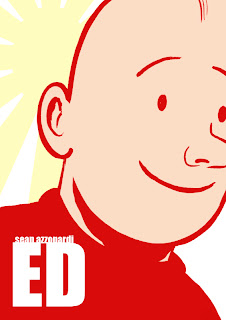 As a somewhat angry young man, Sean loved to create mini comics naming and shaming the evil characters who plagued his working life as a concierge. Sean is (perhaps controversially) unapologetic about using people’s real names in these minis which were later put together to form a book called the “Twelve Hour Shift“.
There was also horror in the background in Necessary Monsters (created with Daniel Merlin Goodbrey), a genre based story with monsters and spies which was intended to be a commercial project. It started twice a week on the internet and was meant to bring them both fame and riches. It didn’t, and Sean actually changed his mind about the direction he wanted to go.
Not as horrible as the dirty fact that Sean confessed to having thrown away three whole bags of his own sketchbooks in a big clear out before Christmas. Hope there aren’t any Azzo fans out there now, or in the future who would kill to touch one page of such a sketch book. But hey, murder your darlings.
Having exorcised the demons, or at least ‘poured all [his]… derision into it’ Sean decided to bring some Ying to the Yang and worked on ‘Ed‘ for five years. This he finished just before Christmas last year. He describes this as being a light romantic tale about a girlfriend, flatmate, sunshine, cats and flowers. Just right for Spring then.
Lately Sean has moved away from grey scale drawings and he’s experimenting with cartoon water colours, getting tactile with the medium as a change from the intensive Photoshop square eyes experience. In other words (his) he’s gone all ‘touchy feely’.
Francesca Cassavetti 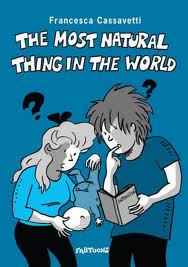 It should have been “The Most Natural Thing in the World” to be a mother, but it wasn’t, so Francesca decided to draw about it. She longed to be a famous cartoonist, meanwhile there were nappies to change. Despite the obvious difficulties of creating and mothering at the same time, Francesca carried on cartooning for years and years with very little readership. She said,