I am a blogger heycoolcookie.blogspot.com and this Laydeez, I have been asked to be the blog-guest!

Okay, so after the introduction and question that everyone dreads (I quite like it, and as Nicola Streeten pointed out, people can be reminded of the otherwise forgotten names of the regulars) the first speaker
was Howard Hardiman who started off by telling us about his background- involving a few qualifications that somehow ended in him becoming a sign language interpreter. It came across that in the ten years he was doing this job, he was earning lots and lots of money, but didn’t feel this was what he wanted to spend the rest of his life doing. Due to the inclination that he should go back to the creative spectrum, and the fact his arms were physically giving in, he started drawing little drawings on post-it notes, which ended up as a comic ‘Badger’. After the surprising success of this, he realised he was in the deep end, and decided to do an MA in illustration at Camberwell, accompanied with the advice NOT TO PUBLISH ANYTHING until it was over! So he started thinking… which lead to the revelations of just what he had been up to when he was signing. This was a well paid job, with ridiculously long hours… and the money was ‘going up my nose’ as he said, every weekend was spent clubbing and he eventually got very into the gay scene. As he described himself as a ‘nosy person’, he found lots of interesting stories from drug dealers, escorts, porn stars… which seemed to develop in his head as little scenes. After these interviews with these people, his initial idea was to develop it into a play, although after some thought, he realised this would attract the wrong audience, who wouldn’t understand what he was trying to say.

“You care more about a dog than you do a person”
So his plan became to finish the first issue of this comic for his MA project, and he would like to get some money at the end of it… so after asking around for publishers, a distributor told him to send it over when he had finished, and they would see what they could do. After expecting some advice, of course as soon as it had been received, the distributors announced they would take it!
This has become “The Lengths”. Now with a schedule of a new issue every two months, he is being forced to draw every day, and his paranoia of not being able to draw has had to be pushed to the side as he realised that people really did like his work! It is also acting as an archive, with a recognisable difference in drawing skill between issues. Find out more here.
Next up was Jenny Linn-Cole, currently a volunteer at the Cartoon Museum and a regular Laydeez do Comics attendee. She started her talk by showing us an inventive animation of drawings of all the doctors, from Doctor Who, merging together. This was created in three days for a Doctor Who exhibit at the Cartoon Museum. After flicking through pictures of previous comics and drawings she’d done, including a small strip about her mother’s cat, pencil sketches of the Laydeez (Sarah Lightman and Nicola Streeten), detective spoofs and fantasy scenes of pirate ships and old pubs, she moved onto a funny, real life story about a conversation she had with her son. 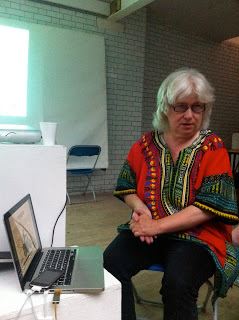 “Mum, I want to try dope…”
After this almost unbelievable converstion being read out, and all of us having a chuckle, she started talking about her latest drawings, about her father’s stroke and her own experience of depression that followed. These had the extra charm of being hand painted, instead of being drawn in photoshop, which she normally uses. With rough sketches trying to describe what depression felt like, she showed us how she eventually came to the conclusion it was like she was a shadow of her former self, and she was losing definition. She then went on to show us the spread of ‘her depression’, which was a beautifully inked shadow of herself which she had collaged using photoshop, with drawings from stages throughout her life on the opposite page, including motorbikes which she did in university. She finished her talk by showing us the aftermath- an explosion of an attic which they had to sort through…. ughh nightmare!

And now… Time for a slice (or two) of Sarah’s cake, and a browse through the graphic novels and comics up for sale. 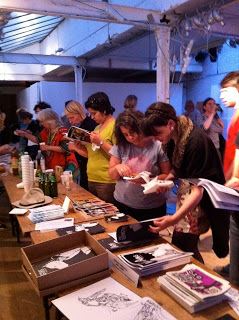 Francesca Mancuso, the next speaker, is an Italian Manga and cartoon enthusiast who draws little cartoons for fun. As she started talking, it was revealed that her love of Japanese illustration started off as a child, when Italian 80’s TV was broadcasting a whole load of anime. In her teens, they started bringing out the Manga comics of TV shows of her childhood, which she began spending all her money on. She bought a book, by Manga artist, Suzue Miuchi, that was really influential for her, but when she tried to look for a an English fan site, she couldn’t find one. This made her quite frustrated,  inclining her to make her own website… http://www.dreamsaddict.com/garasunokamen/ because of this book, web design is now her occupation!

Her first creative love was oil colours, although she hasn’t painted that many canvases as she doesn’t have space for them all. The next thing she tried was acrylics- both on paper and canvas- which she found more difficult, but still enjoyed. The quickest and best way to add a splash of colour to her sketches right now, however, is watercolours.

She then went on to show us some of her own cartoons and cards for her friends and family and the next slide was slightly different… they were emotional paintings, with soft tones and smooth lines, which had apparently been criticised for lack of anatomical knowledge, but had seemed to get the most response from the audience and critics, and let her display her emotions and feelings more.
At the very end of her presentation, she showed some very skilful sketches, from real life, of people at a cartoon club/meet up.

The final speaker was Mike Medaglia, who introduced himself as a “Taoist Artist”. Originally from Canada, he is presently based in London, working as a massage therapist as well as developing his drawing. He began by showing us a variety of his Taoist Mountainscapes, showing a variety of mark making. Alongside the influence of the Taoist way and concepts such as Yin and Yang, Mike’s influence within the world of comics was from the Manga work of Osamu Tezuka.

His first foray into comics was the production of “Wet Ashes” that he created with his partner, soon to be wife, Lisa Woynarski, who did the writing. They made a story about a group of characters and their lives and relationships with each other. Mike was on drawing and used a fairly crude drawing style. Some years on they have just produced the next in the “Wet Ashes” series, with a more sophisticated drawing style. A spread that was popular with the audience was one showing one of his character’s obsession with Bonsai trees. The drawing shows the influence of Chris Ware on Mike’s developing style.
Mike told us how he is keen to improve his drawing skills. He set himself the task of drawing a face a day for 333 days. Why that number? He has a thing about random numbers. He mentioned that on 11.11.11 he and Lisa will be getting married. Brilliant! So…back to Mike’s numbers… Once he decides on the number for a project he sticks to it. And with only a few days to go, Mike’s next task will be 333 faces in colour this time. He draws from photos and we were able to recognize some of his models.
Mike is a natural collaborator and experimenter. One new collaboration is “Dot Comics” with Elliot Baggott  He showed us a page, which has been coloured by fellow comics artist, John Riordan.  They hope to launch it at Thought Bubble Festival in November. Another collaborative project is with Mark Haylock. They are planning to start a monthly comic book club, maybe at the new Gosh, or maybe at ISW. The foundations are being laid and they hope to kick off in the autumn. Perhaps the most interesting collaboration was Mike’s work on abstract comics. He showed us a panelled page of marks. He told us how it started when he was playing around with his 8 year old nephew. The liberated way his nephew drew so freely and imaginatively, offering Mike commentaries on abstract marks, has inspired Mike to consider developing the idea further. Yes, please do! And so the end of another inspiring evening…sweet dreams…