I love to periodically descend from my bucolic hilltop abode in North Wales and haul my parochial butt down to attend Laydeez-do Comics. This month I was particularly honoured to be January’s ‘Blogess’ and am thrilled to report on the talks of four interesting and esteemed speakers.

My name is Ian Williams, and I edit a website called GraphicMedicine which lists and reviews comics and graphic novels with medical narrative, themes or content. I also make comics, under the nom-de plume Thom Ferrier. Sorry to confuse you. Many thanks to Lucy Bergonzi for the supplementary pencil sketches

The meeting was very well attended, affording a modicum of bodily warmth to the white concrete art-space that is the Rag Factory. Our first speaker was a man who, for 20 years has contributed so much to the interface between comics and medicine: Ed Hillyer, a.k.a. Ilya. His talk at Laydeez, however, focused on a specific ongoing project based around a two hundred metre square uncompleted mural in Jakarta, Indonesia. Ilya was invited by the British Council to join local Indonesian cartoonists to recreate and continue the message of the mural, which was abandoned in 1975, a year after it was started, due to the dampness of the walls and to lack of funds. The room which contains the mural was closed for 35 years and largely forgotten, the original artist dying in the meantime. The project involved creating new characters from the scenes depicted, in preparation for a new media comic and a theatrical opening ceremony of the ‘secret chamber’. The mural depicts a wedding feast, a government house rice feast, a crazy street carnival and a killing. The idea was to recreate the story for today’s youth in a form that is accessible: a downloadable comics series of thirteen episodes and treasure hunt game for mobile phones. Indonesia is a cultural ‘melting pot’, a nation conceived of trading convenience, with a violent Dutch colonial past, racial tension and endemic malaria and the outwardly happy scene actually contains much violence and darkness on closer inspection. 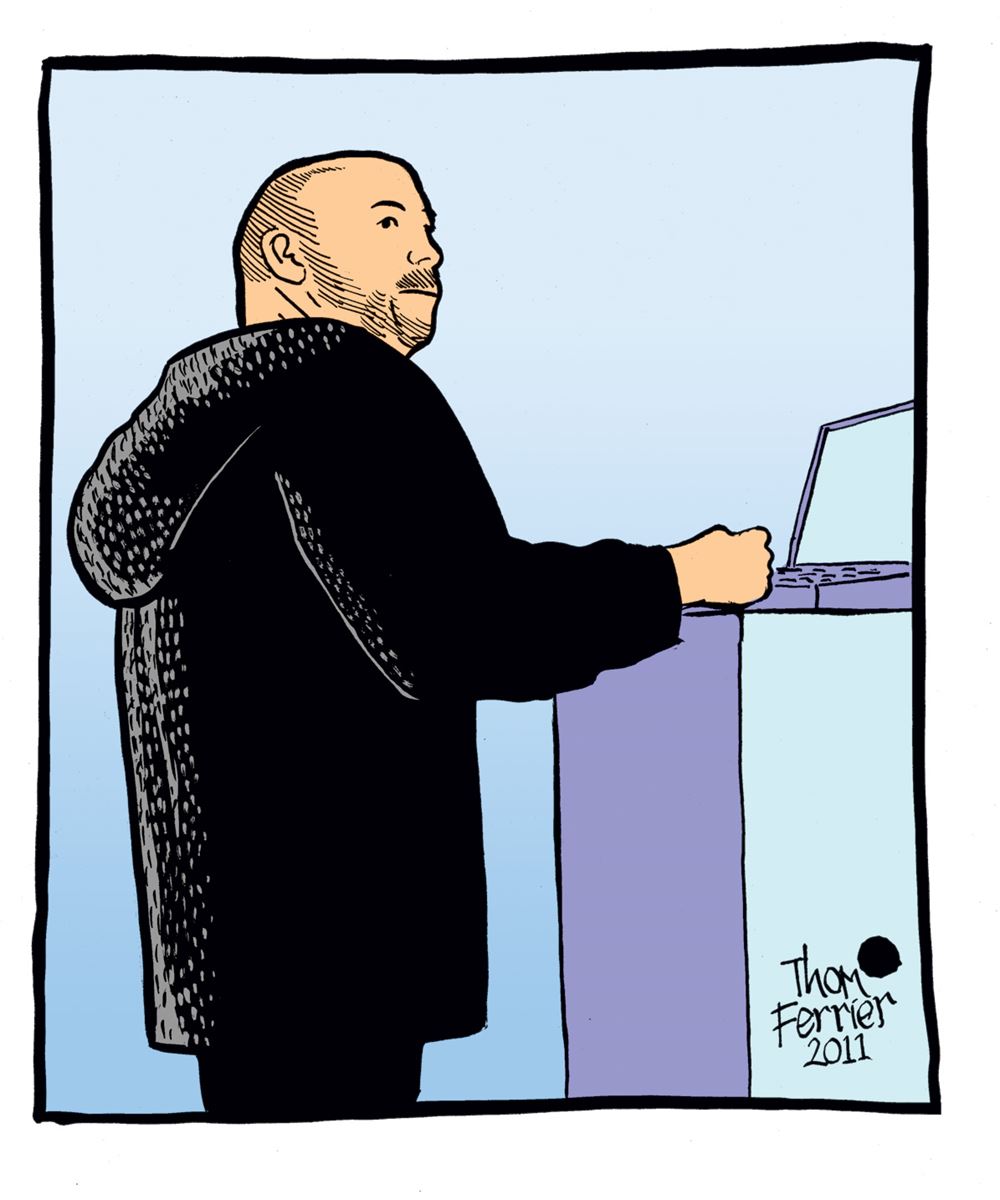 The decoding of the story took the team 3 days. The artists, who came from diverse cultural backgrounds, collaborated in creating four modern equivalent characters to star in the comic series and work as host avatars for the opening ceremony and treasure hunt game. They worked on storyboards to create background narratives to expand the scenes depicted in the mural. The storyboards are due to be used by an animation company to make the actual series, although Ilya would prefer the artists themselves to be involved in the production. The opening ceremony will involve a magic torch experience, whereby the public will be able to point a torch at the walls and the missing pieces of the mural will be magically filled in. 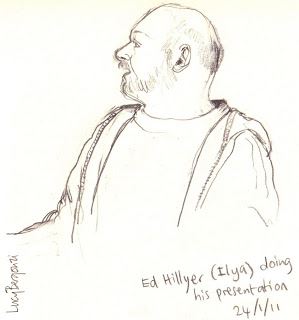 The next speaker was Dr Julia Round of Bournemouth University, who, with Chris Murray of Dundee University, edits Studies in Comics from Intellect Journals. The associate editors are Dean Chan and M. Thomas Inge and many good people contribute to the editorial board, including Roger Sabin, Paul Gravett, Mel Gibson and Doug Noble. SIC is trying to distinguish itself among other recently launched journals by maintaining a strong theoretical focus whilst encouraging a truly interdisciplinary approach to this emergent academic field. The journal welcomes contributions from many diverse perspectives as well as creative work and will publish two editions per year, one being a themed issue. The recent edition- volume1 number2- had the theme of autobiography and contained, among many interesting articles, Sarah Lightman’s interview with Gabrielle Bell, oh…and my review of Darryl Cunningham’s Psychiatric Tales too! 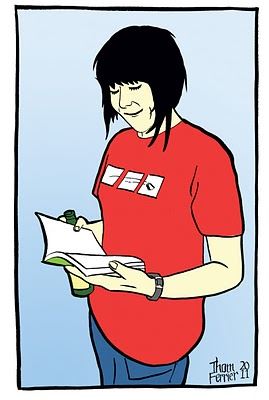 Submissions are currently sought for the volume2 number2 which will come out in late 2011, articles of 4 to 8000 words, reviews and original comics of 1 to 5 pages. In its physical form, with its perfect bound, landscape format and matte laminate cover, I have to say that SIC is one of the most aesthetically appealing journals out there. Julia handed out some free copies of v1.2 as well as postcards which promoted a half-price personal print subscription of £16. The journal can also be viewed online for free.

Comics artist Corrine Pearlman, publisher and designer with Myriad editions and a designer for the Comic Company, began her talk with a summary of her life, as represented by two pie charts- one depicting ‘reality’ and one ‘wishful thinking’ as she would like her time to be ideally divided. Myriad are launching their First Graphic Novel Competition, with entry form and details are on Myriad’s website. The deadline for the submission of 15 to 30 pages is 1/10/11, the prize being a contract with Myriad for publication of the work. The panel of judges include Ilya whose first prose novel, The Clay Dreaming, the story of an aboriginal cricket player who came to London in the 1860s has recently been published by Myriad.

Myriad originally published illustrated atlases and Corinne started working for them as an illustrator and designer. 5 years ago the manager, Candida, had the idea of doing an anthology called The Brighton Book- a combination of literature, poetry comics and photography. Woodrow Phoenix’s entry The End Of The Line turned out to be one of the most popular items in the book. The publishers and readers were very taken with the combination of beautiful drawings and wonderful prose. The success of The End Of The Line led to Myriad asking Phoenix for an idea for a graphic novel, and Rumble Strip– a polemic about road deaths- was the result. The company has since published 5 graphic novels to date including Kate Evan’s Funny Weather and The Food of Love which has been taken up by the national childbirth trust and has done well. The next book to be published by Myriad’s will be Nicola Streeten’s graphic novel Billy, Me and You– coming out later this year. Corrine was very taken by by the way that Nicola’s story of the death of her child was cleverly ‘protected’ within her humorous family magazine Licorice to which she subscribed. 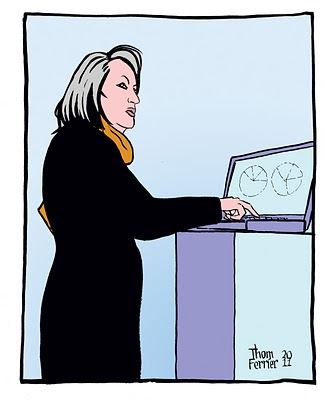 Corrine was originally published as a comics artist in 1976 while working for age concern. She produced a comic about old people called Cold Oldies, a story of elderly people dying of hypothermia. This was followed in the 1980s by a graphic guide to broadcasting ‘Media and Power’ which, due to its subject matter, became rapidly outdated, and subsequent work covering race hatred HIV/AIDS, Motherhood, and Religion. Her exquisitely drawn strip Playing the Jewish Card is now included in Sarah Lightman’s exhibition Graphic Details: Confessional Comics by Jewish Women and her illustrations of Ottoline the Museum cat are now being used on souvenirs from the British Museum. Corrine also does porn! She showed us her naughty illustrations of Northanger Abbey for Susan Catherine’s comic Classics Penetrated.

The Comics Company was formed to publish the anthology First Love in 1988, which contained a collection of strips on that subject. Corrine was kind enough to bring along lots of free copies of this book and distributed them free to the audience. The company has since produced many health education comics in conjunction with agencies such as the FPA and has about 500 leaflets in print. Ilya is one of the artists who has worked extensively on these projects.

Corrine co-organizes Cartoon County which has been meeting since 1992 in the Cricketers pub in Brighton. It organizes exhibitions and talks and produces monthly podcasts. Brighton is an excellent place for cartoonists- there are so many living there. The group meets on the last Monday of each month and anyone is welcome to attend. They are also always looking for guest speakers.

Corrine also contributed to the millennial edition of Girl Frenzy, published by Laydeez final speaker Erica Smith, who, equipped with a large pile of zines turned the Rag Factory settee to face the audience, thus providing an intimate conversational seating plan for her ‘show and tell’ talk. Beginning with Kill Your Pet Puppy, Erica showed us some of the zines from her marvellous collection, displaying examples of early colour photocopying and rainbow printing. Print processes, with their unique looks come and go, placing each production on a historical time line. 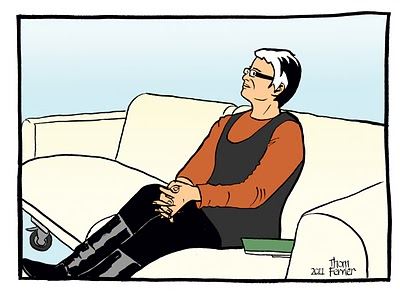 Having studied typography and graphic communication at Reading University, Erica’s graphic design has always been informed by print production processes. Informed by similar sensibilities as the text-based Spare Rib and Shocking Pink, Girl Frenzy was born with an anarcho-feminist and anti-censorship agenda to fill a gap in zine production. Erica was was influenced by the art of the Hernandez brothers who favoured the portrayal of strong female characters rather than ‘victims’ and the zine production of Stuart Holm and Mark Pawson. The money that Erica should have been paying to the government as poll tax went into her Girl Frenzy bank account and went towards production cost. There is little money in zine culture and so contributions come from the heart. Her first issue came out around the time of the poll tax riots and contained an article by Trina Robbins about sex sexism in comics. The first three issues sold out very quickly and the title was names melody maker zine of the year for two years running. Issue 3 came out as riot grrrl bands caught the attention of the public and Erica’s zine became linked to the movement. Putting a girl musician on the cover of a zine was also a very good way of increasing sales.

Production values improved for the perfect bound, laminated millennial edition and following this issue, Erica became slightly bored of publishing, stopped doing comics and moved towards spoken word events, where Girl Frenzy provided a platform for people who had never performed before. She did, however, produce a wonderful set of playing cards based on things she loves. 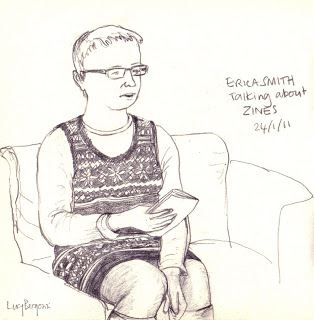 Some of the audience had attended specially to hear Erica talk about the six issues of ‘Girl Frenzy’ she has made over the years and the audience engaged in an enthusiastic discussion about the current state and future of zines, which seem to be making a resurgence, as people move away from electronic blogs to good old paper and ink. It was suggested by Alex Fitch that people are turning to the individualist approach in response to the ubiquity of slick blog templates. Darryl Cunningham suggested there was a healthy interdependency between blogs, zines and comics, each feeding the other media. Nicola felt that small press anthologies such as Whores Of Mensa may be the modern equivalent of zines like Girl Frenzy.

The meeting ran over and eventually wound up, with some of us going on to Brick Lane for further discussion and gossip over a late night biryani at Sarah and Nicola’s favourite curry house, whose name I can never remember.